Where to Celebrate Chinese New Year in Europe

Chinese New Year is celebrated by over 20% of the world’s population and is the most important holiday for Chinese people all over the globe. It is also referred to as the Spring Festival as it marks the end of the coldest months of the winter and welcomes a new season. You might also hear it being called the Lunar New Year because it goes off the lunar calendar, which is why there is no set date for it. In 2020 Chinese New Year is on the 25th of January and there will be celebrations taking place over the previous and following week. But there’s no need to travel to China to enjoy the celebrations. Each year, hundreds of celebrations, big and small take place all over Europe involving the local Chinese populations and often centring around China Town. With that in mind, we’ve put together a list of the best places to celebrate Chinese New Year in Europe.

London boasts the largest Chinese New Year celebration outside of Asia. Every year the capital of the UK goes above and beyond to put on a fantastic party for Chinese residents, visitors and other people wanting to enjoy this exciting occasion. The celebrations centre around China Town and the West End which is one of London's coolest neighbourhoods, with hundreds of thousands of people attending the colourful parade, free stage performances and traditional Chinese food. In 2020, to welcome the year of the rat, the main celebrations will take place on the 26th of January which is the day after new year. Make sure you don’t miss the Chinese parade of over 50 different teams along Shaftsbury Avenue that will feature dragon and lion dances at end at Trafalgar Square. Stay in a luxury apartment near Oxford Street so that you can guarantee you're within walking distance to the celebrations. 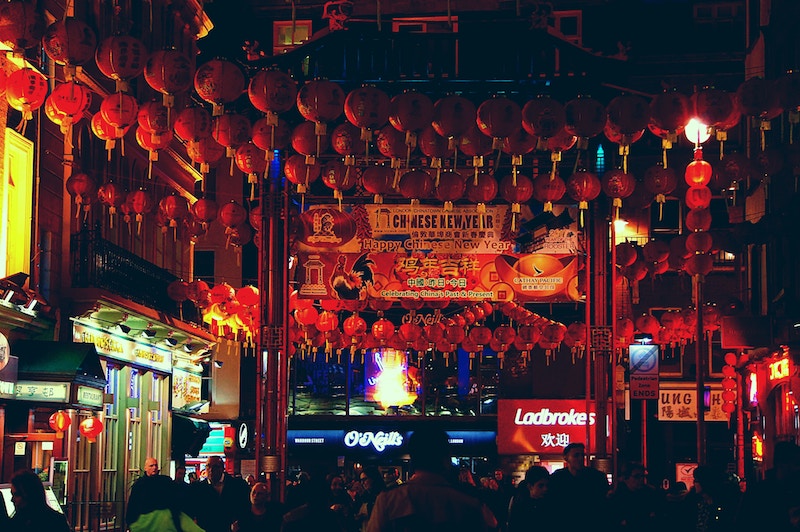 There is a sizeable Chinese population in Madrid meaning the Chinese New Year celebrations here seem to get bigger and bigger every year. The main focus of the celebrations is in the suburb of Usera, the Plaza de España and the Chinese Cultural Centre. This year there will be a cultural programme aimed at educating the local population on Chinese traditions as well as festivities including lion dancing, traditional Chinese floats and of course, lots of delicious food. The cultrual program is scheduled to run from the 17th of January to the 16th of February, so you will have lots of chances to celebrate. 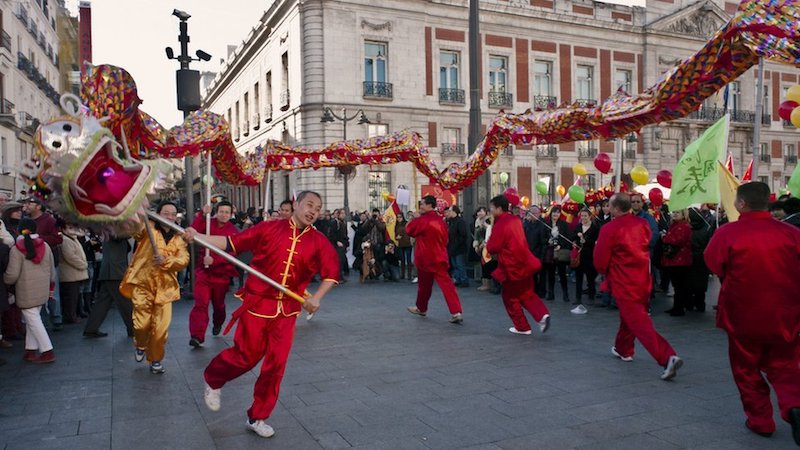 Chinese New Year in Paris is a great way to see another side to the charming French capital. In the Belleville district, southern Paris near Gobelins, and the district near the Centre Georges Pompidou you’ll find a myriad of celebrations taking place over the Spring Festival. The main China Town parade in Gobelins is perhaps the most spectacular with dancers and performers everywhere you look. Also look out for the traditional firecrackers which leave a definite smoke smell in the air but are all part of the fun. Stay in a luxury apartment in the Paris city centre and it will be easy for you to travel to the celebrations. 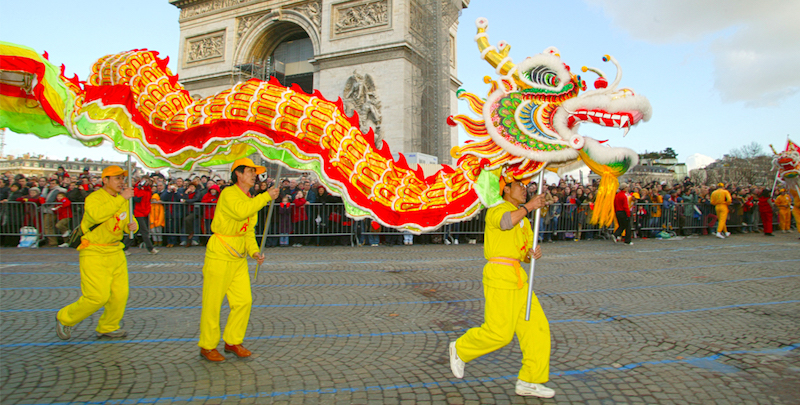 China Town in Amsterdam is directly next to the Red Light District and has a party atmosphere year-round thanks to its central location. So stay in a luxury apartment in the centre of Amsterdam to be close to the action because on Chinese New Year, the street really comes to life. It becomes the Amsterdam neighborhood to go to at this time. There is a parade from Dam Square with traditional lion dancers and the Chinese temple, Fo Guang Shan on Zeedijk is host to loud bangs of firecrackers and huge celebrations. If standing in the street isn’t really for you then duck into one of Amsterdam’s many Chinese restaurants. We love the dim sum at Oriental City.

If the crowds of London don’t appeal to you but you find yourself in the UK over Chinese New Year then Manchester is the next best choice. To celebrate the year of the pig, the city has created a giant art installation piglet and will also host traditional lion dances. Make sure to get your fill of Chinese food at the street food market in St Annes Square which will take place from the 24th to the 26th of January. Expect stalls selling everything from roast duck to chicken’s feet. 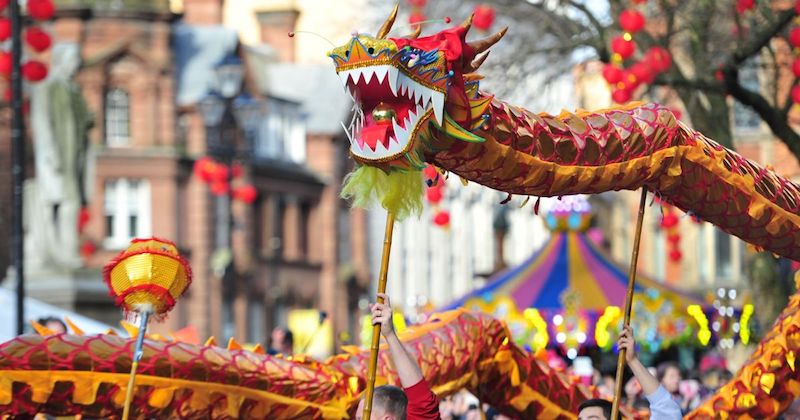 People are often surprised by the quality of Chinese food in Milan, but really it shouldn’t be that surprising considering the large number of Chinese residents. This year to celebrate Chinese New year in Milan, there will be a Golden Dragon Parade, a Chinese lion dance and a final masked parade. The starting point of the parade is from the end of Via Paolo Sarpi, which is close to one of the nicest neighbourhoods in Milan, and will last from 2 until 8pm. If shopping is more your thing, Milan’s outlet village Fidenza will have special Chinese New Year discounts to take advantage of. To really soak up the local atmosphere, stay in a luxury apartment in Milan instead of a hotel and live like an Italian. 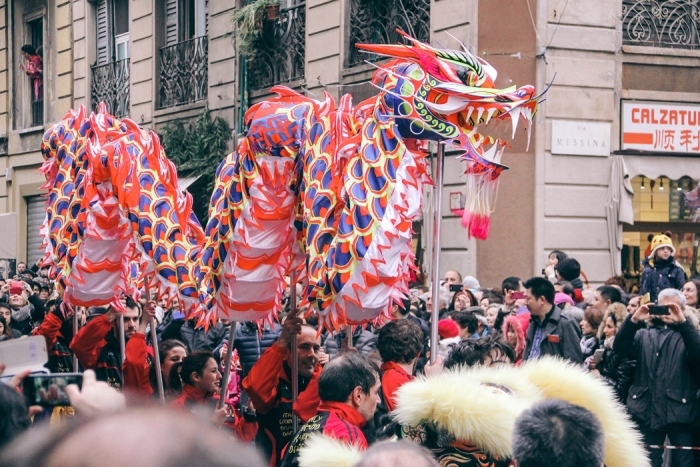 Head to Kansalaistori Square to enjoy the Chinese New Year festivities in Helsinki and watch skilled performance groups from Beijing take part in traditional lion and dragon dances. There will also be a large market with stands selling crafts and delicious Chinese dishes. The celebrations will culminate with fireworks at Töölönlahti. 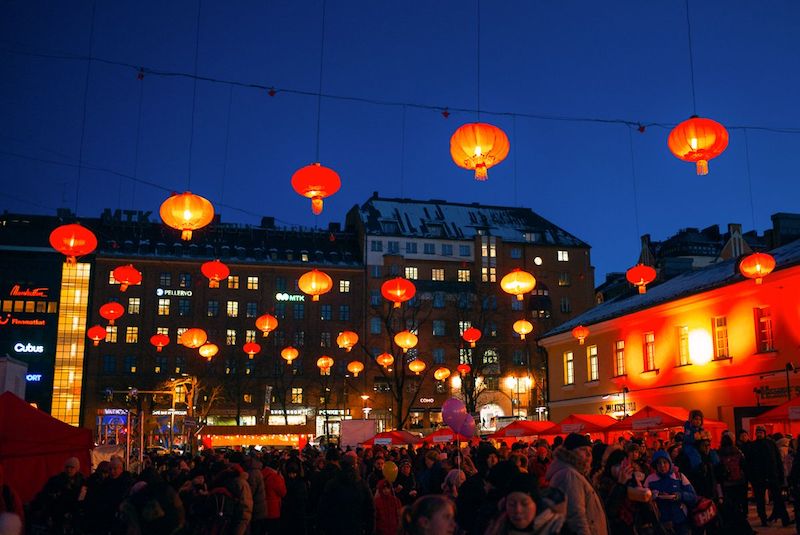