Best Yoga Poses to Do At Home For Beginners

You might not know this yet but your home is a great place to exercise in. Sure, it doesn't have all the fancy equipment a popular gym will have, but you don't really need them. All you need, really, are what you already have at home: peace, serenity, ample space, and your body. This is especially if you're doing yoga. Now, you may think that doing yoga required going to classes, particularly if you're a beginner. But in reality, you can start yoga in the comforts of your own home. and these are the perfect moves to begin with! 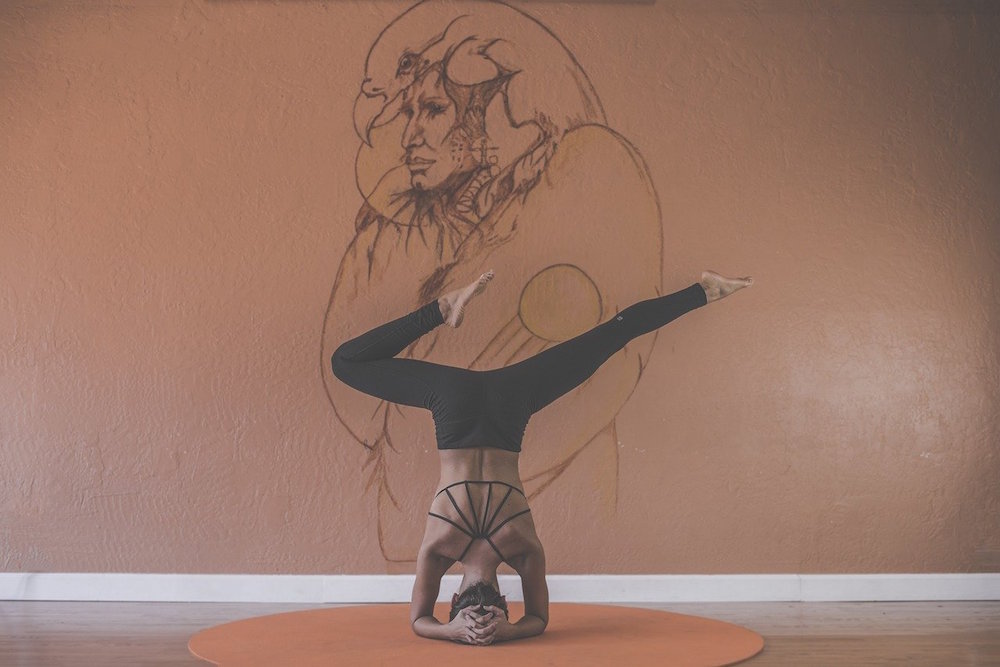 As with any other exercise, you have to start with basics when beginning yoga. And practically the most basic pose there is the Tadasana. It's basically standing straight with your feet slightly apart. At times, you'd have to stretch a bit into your tip-toes, but other than that, it's as simple as that! Now, you may think, how is standing straight part of this exercise? Well, yoga is all about finding your center. And standing up straight is the first and easiest step to do that. 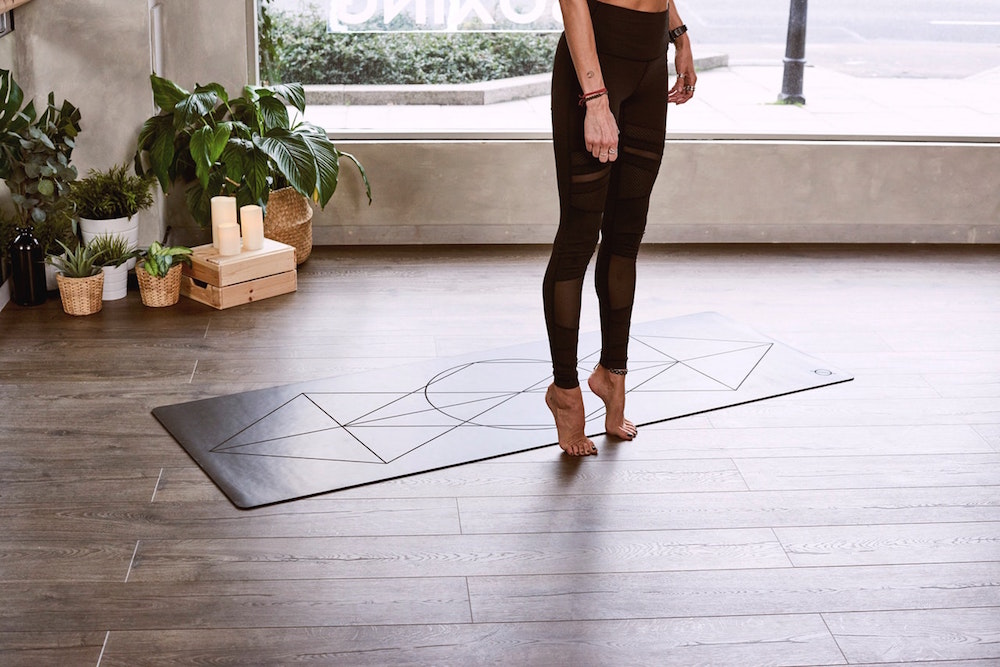 Now that you've mastered standing up straight, it's time to turn it up a notch. but only just a notch. This next step, called Urdhva Hastansana, required you to raise both your hands up as high as you can. As you inhale, you slowly but surely—and rhythmically to your breathing—stretch upwards. It's both a relaxing and simple pose that will better prepare you to do the more complicated poses. Just remember to always breathe as you do them! 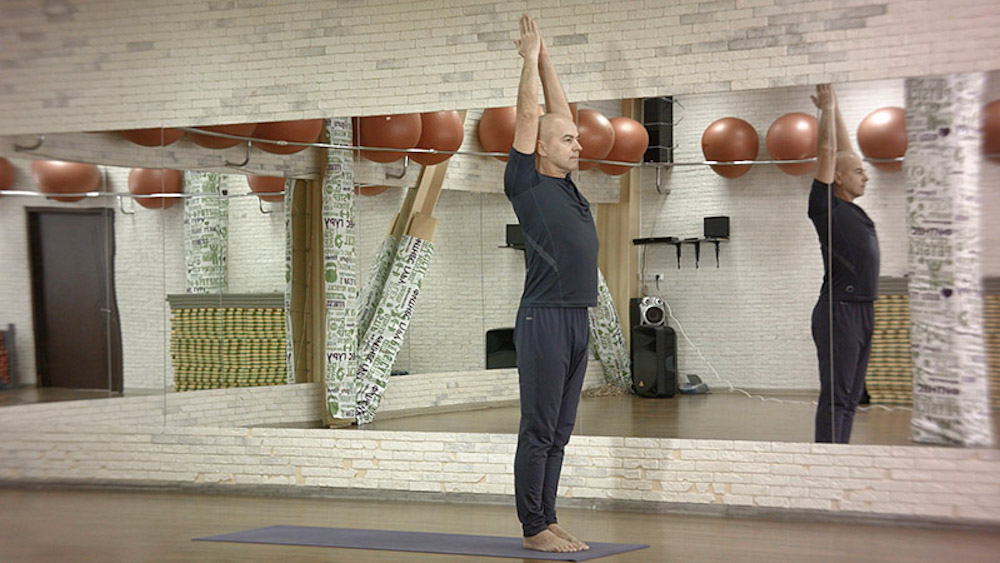 After inhaling, of course, it's time to exhale, But as you do that, you can also do the Uttanasa pose. With your arms still raised, slowly descend them as you let go of your breath and bend your entire upper body forward. Do it until your fingertips reach your toes and your head is already hanging. This is probably one of the first tricky yoga poses to get, especially if you're not that flexible. And you’ll need some space for this, probably a big bedroom will do! So do it slowly and according to how comfortable you are. 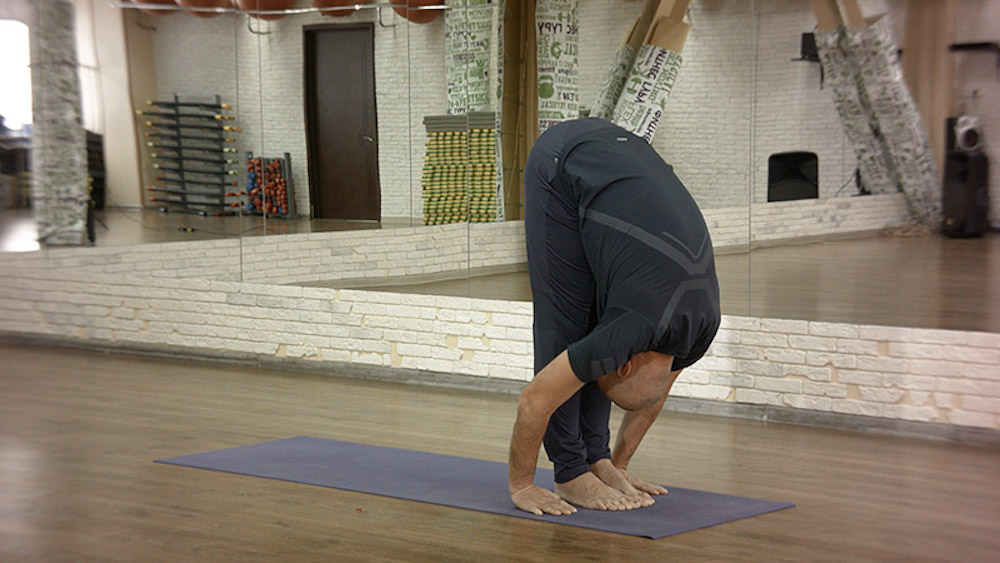 If the Uttanasa pose left your leg aching, don't worry. You can do the lunge next. A classic yoga lunge isn't the same as doing the ordinary aerobic move. Here, as with any other yoga pose, you do it slowly and as you breathe in and out. This type of lunge requires a certain pattern of breathing a calmness to it. If you do it fast and furiously, you risk losing your center. 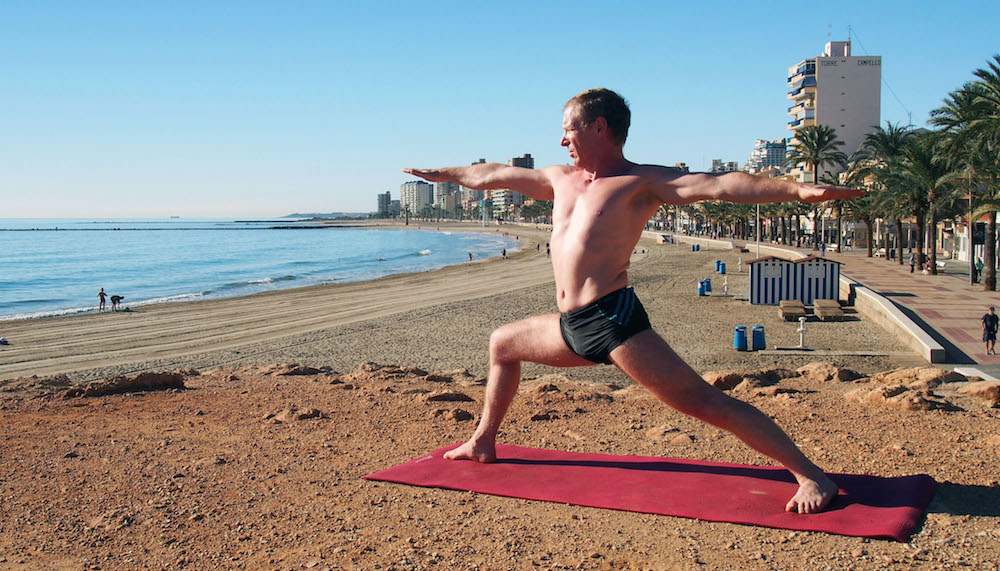 By this time, you might be ready for more strenuous yoga poses. And perhaps, among them, the Kumbhakasana is the easiest to do. It's sort of like an angular plank pose, allowing you to keep your center as you put all your weight and effort onto both ends of your body. But since your arms are stretched here, thereby allowing you less stress on your toes, it's not as difficult to do as a flat plank pose. It's just right to get your body in gear. 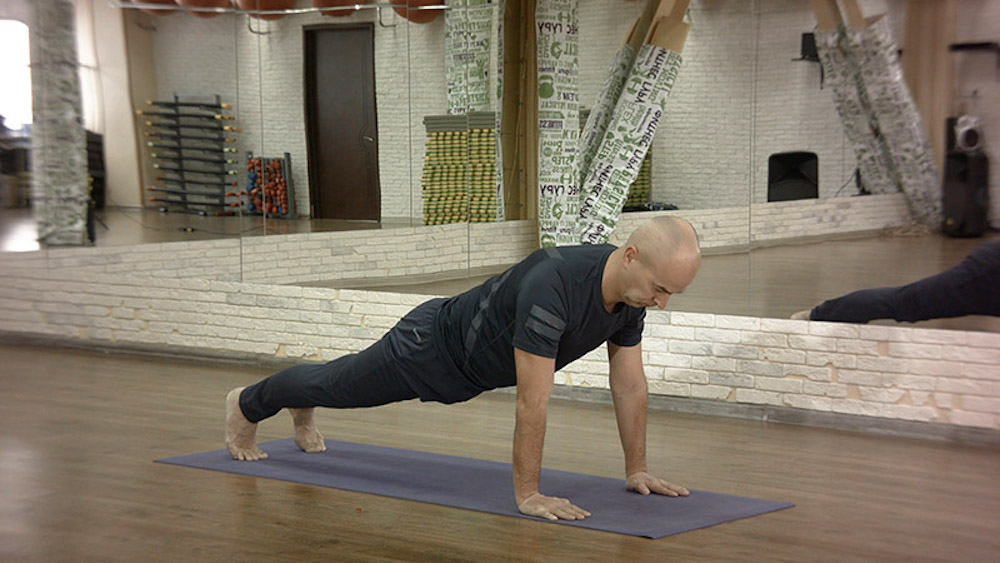 Okay, enough with the slanted plank, it's time to do the real thing! The Chaturanga Dandasana is a flat plank pose that required you to stay as stiff as a board. With both your palms firmly flat on your mat, bend your elbows until your upper body is completely level with your lower body. Make you're your toes are flat on your mat as well, else you'll likely won't last three seconds on this pose. 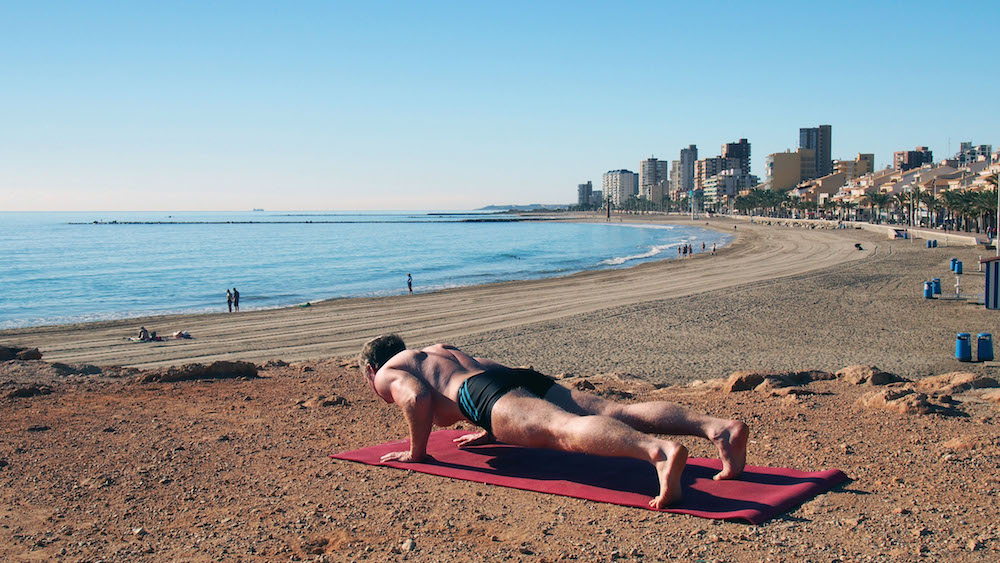 After the Chaturanga Dandasana, it's time to go back up again. But not before you stretch the body of yours. After the low plank pose, you're probably itching to elongate those legs and limbs to remain comfortable (especially if your living room is already spacious enough!). And the best yoga post to do this is the Adho Mukha Svanasana. With both your feet and hands firmly on your mat, raise your hip up until you form a triangle shape with your body. Though you may look silly, your blood is actually circulating better with this pose. 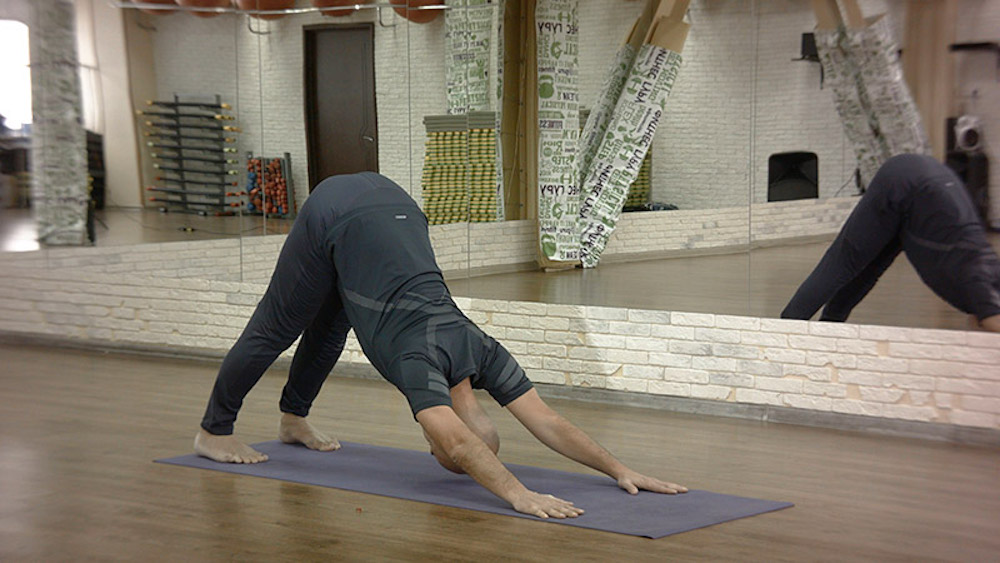 You're now ready to combine some elements of the poses you've already done. Off to the more complicated yoga positions, and the first-in-line? Utthita Ashwa Sanchalanasana! As you stretch both your arms up, reaching for the sky, lunge forward as you rhythmically breathe. Not only are you elongating your body to a fitter look, but you're also releasing the tensions away. As well as opening p your organs so that the air can flow right through with ease!

Speaking of stretching, why not twist your waist up to really ease away those tensions? Raise both your arms up to your sides, go as far as you can go, and then move one side forward. As you twist, lunge the same side forward and stretch the backside further behind. This pose is Virabhadrasana II. It keeps your body in check and helps it become more flexible as you get further into the yoga exercise. 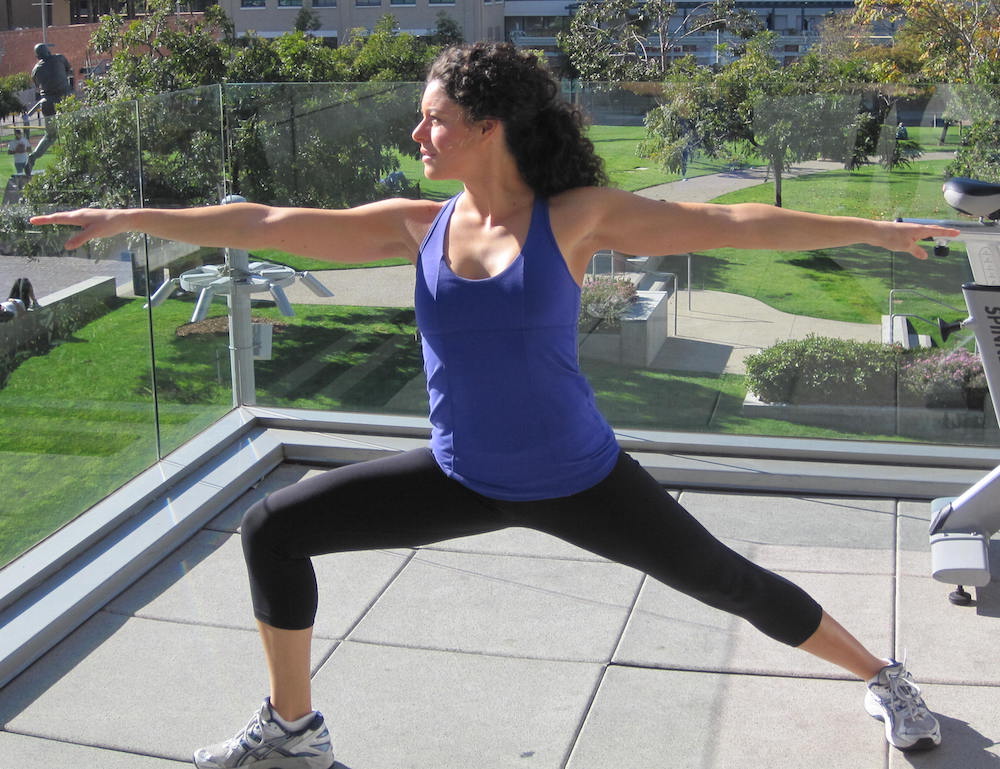 Finally, do Trikonasana! Remember the kid's song "Heads, Shoulders, Knees, and Toes?" Well, it's sort of like the toes part but a lot more complicated. Because here, you're not only touching your toes. You’re also twisting your waste, stretching one hand to touch your opposite toe and the other reaching high up in the sky. not to mention your feet have to be apart and your slightly lunching at an almost 45-degree angle! But after doing all of that, you'll feel as if you've stretched all of the bad tensions away from your body! 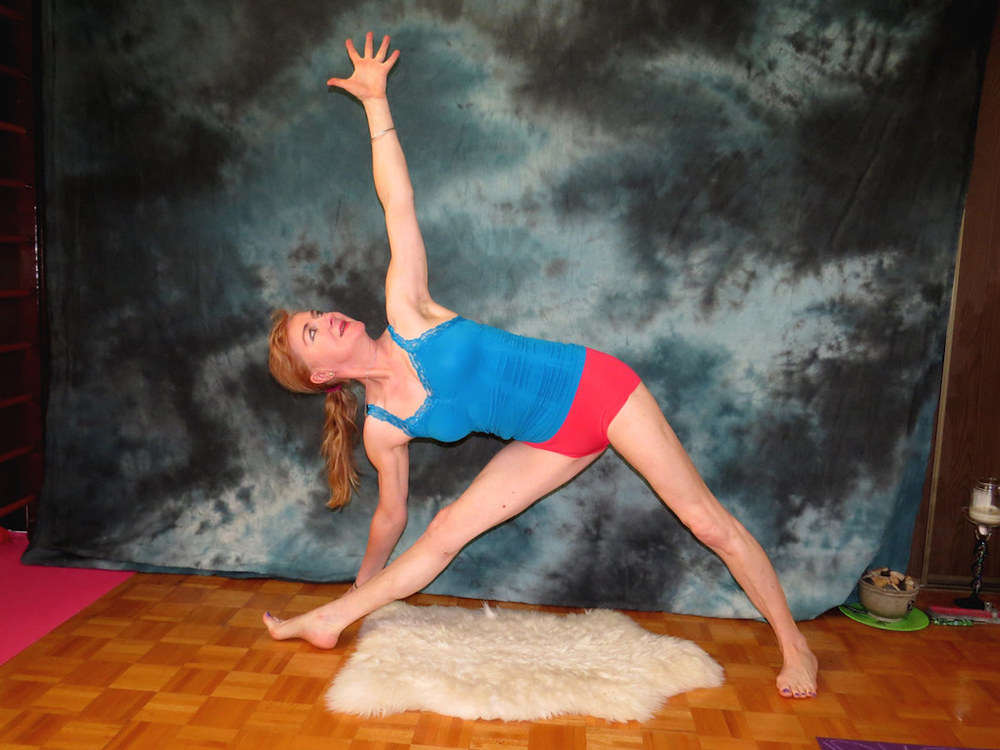 Stuck at home? You could still work out and even begin yoga! However, don't get ahead of yourself! just start with the basics. And the best part is they're easy to do at your very own home!