2021-10-29
Paris is a city so obsessed with perfume, it literally inspired a book about it. A visit to the city of love can be such an onslaught on the senses, that scent is often forgotten in the hedonic chase for new flavours, sights and sounds. But put down the croissants and Louis Vuitton for just a moment, and you’ll find some of the world’s finest fragrances on offer here. From niche independent perfumers to outlets full of big brand names, there’s something for every taste and price range. So whether you fancy yourself as a real life Jean-Baptiste Grenouille or you’re just after some of the finest perfume ‘made in France’ perfume brands at discount prices, here are the 10 best perfume shops in Paris.

No list on Parisian perfumers would be complete without one of the world’s oldest cosmetics houses – Guerlain. Founded in 1828 by Pierre-François Pascal Guerlain, the eponymous brand has grown from a single shop in Rue De Rivoli, to a jaw-dropping 17,000 square foot flagship of mirrors and white marble on the Champs-Élysées, and another equally impressive store in Le Marais. Characterised by their ornate bottles, many of their most iconic scents have remained unchanged since they were first synthesized – Jicky was first concocted in 1889, Shallimar in 1920 – giving you access to scents that are both nostalgic yet timeless alongside more contemporary fragrances. Undecided on what to buy? An hour-long scent test lead by one of their consultants will have you walking away with your perfect perfume. Got your perfect scent? Now all you need is the perfect wardrobe, follow our guide on how to dress like a Parisian this winter. 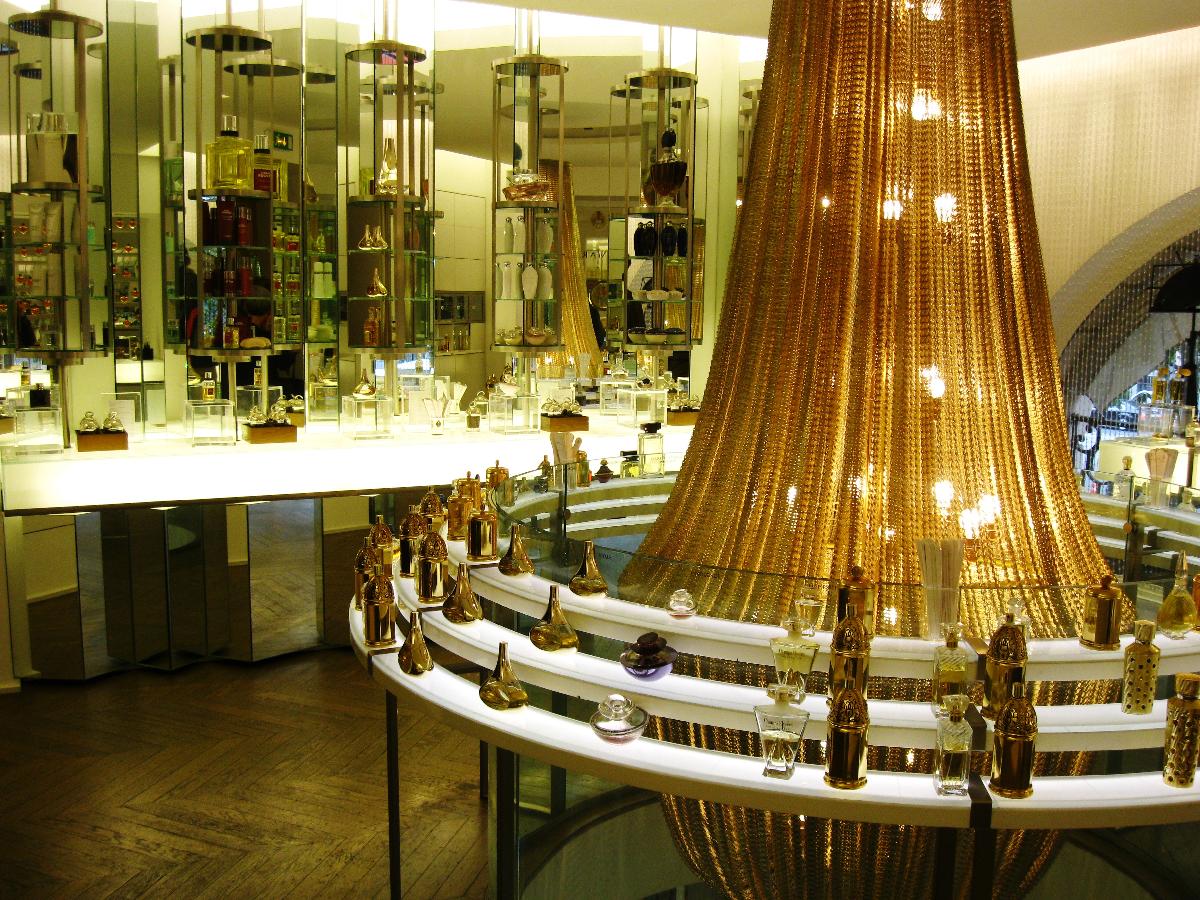 An interior designer, a painter and a theatre set designer decide to open a store. No, this isn’t the start of a joke, but rather the founding story of Diptyque – the cutting edge luxury brand that introduced the world to the concept of unisex fragrances. Beginning as a sort of global bazaar, home to interior design pieces and homeware inspired by the trio’s jetset lifestyles, Diptyque would make the leap to fully fledged perfumery in 1968 when it introduced its first eau de toilette – L’eau. This spicy scent would become a hallmark of the Diptyque approach, ushering in a new era of modernity in unisex fragrances, and cementing the brand and their minimalist packaging as a household name synonymous with luxury scented candles and all things fragrant. Their flagship store in Saint-Germain-des-Prés is where you’ll find their biggest range alongside an exclusive 50th anniversary collection entitled ‘34 Boulevard Saint Germain’ in reference to the store’s address. Our picks include the best selling ‘Figuier’ and ‘Baies’ candles alongside their Greco-inspired ‘Philosykos’ and vanilla-scented ‘Eau Duelle’ perfumes. 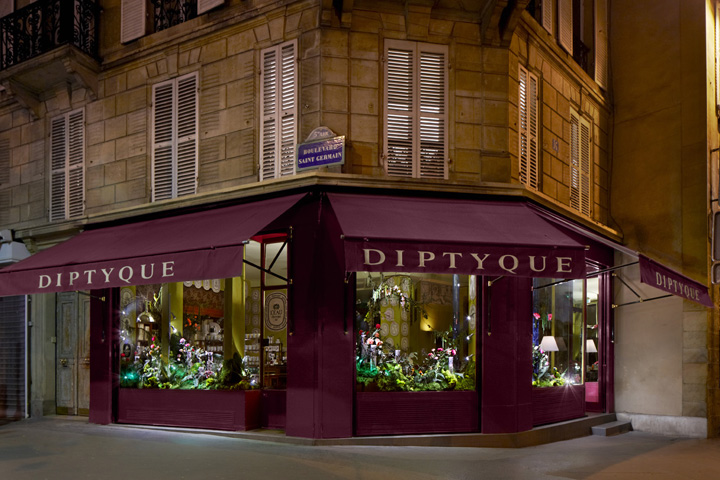 One of the French Riviera’s greatest exports, Fragonard is one of three historic perfumery’s from Grasse – a region which has been the epicentre of French perfume since the 16th century. Now, Fragonard creates a range of all-natural luxury fragrances that perfectly balance complexity and subtlety, alongside other toiletries, books, clothes and home decor, all of which can be found in any of their stores in Paris. Officially founded in 1926, Fragonard has more than 300 years experience in perfume production, and it’s exactly this expertise that you’ll discover when you visit their Musee du Parfum near Opera Garnier. This free tour will take you on a journey through over 3000 years of perfume making, starting in Egypt and ending in modern day. Highlights include the myriad of antique pots, bottles and flasks that housed perfumes in the past, and a deep insight into the instruments and techniques behind ancient scent-making. 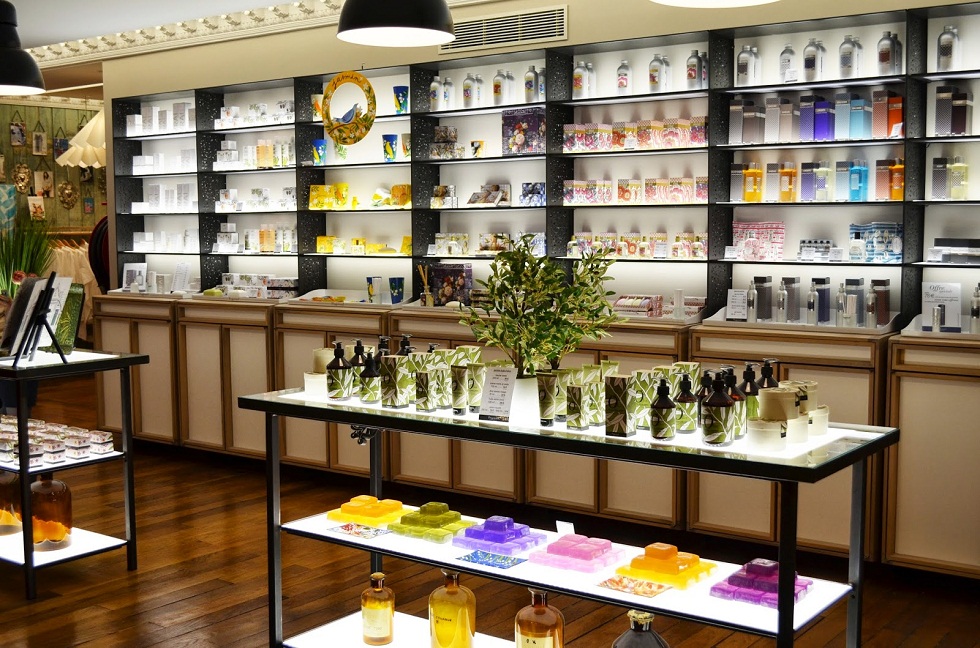 At Nose on Rue Montorgeuil, olfactory diagnosis and discovery is front and centre. Usually, a selection of 500 fragrances from 50 different designers would seem daunting, but Nose’s experience is far from usual. Over 30 minutes, you’ll receive an education on how scents change with time, and also how to pick out the subtle nuances in fragrances, before ranking various samples to discover your individualised scent profile. This full diagnostic experience – complete with tea or coffee – will have you setup with a lifetime of knowledge for the best scents for you. Afterwards, you can shop from Nose’s incredible selection of rare and limited production runs with confidence, knowing that you may have just discovered your lifelong signature scent. Looking for something more trend driven and seasonal, here’s our look into the fashion trends that make you look like a Parisian this fall. 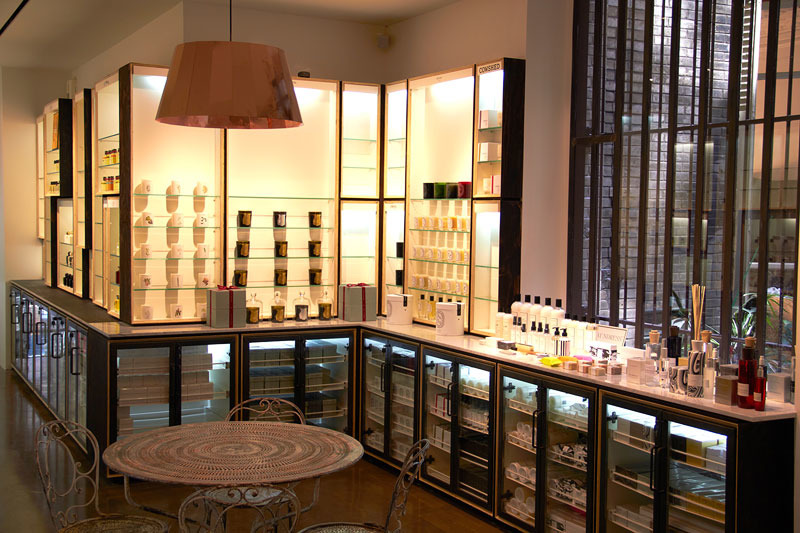 British fragrances in Paris? Hear us out. Yes, Jo Malone may have been founded in London, but Paris is home to some of their most beautiful stores outside of the British capital. Organised by scent rather than obscure names, Jo Malone’s selection of elegant colognes are easy to browse and with each scent being unisex there’s something there for even the most inpatient of shopping partners. Crafted using botanical ingredients and natural scent sources, their fragrances are distinctly light and lack the strong chemical aroma of some of their counterparts. Meanwhile, their sleek gift boxes complete with luxurious grosgrain ribbon ties are almost as iconic as those from Tiffany or Louis Vuitton monogram, making their fragrances the perfect flashy gift for impressing that special someone. P.S. If you’re thinking wine is a good gift for your French friend, think again. Check out our guide to Parisian customs and traditions, you’ll thank us later. 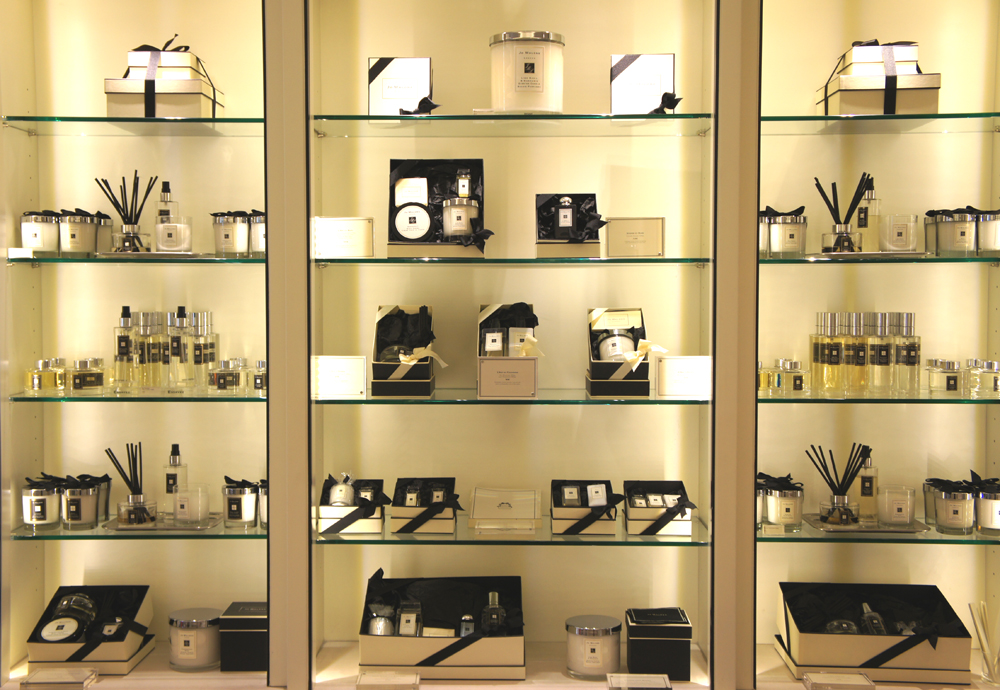 Walking into Annick Goutal is like walking into a time machine, and that’s a good thing. Every store feels like the glamourous private boudoir of a member of French royalty, it’s romantic and retro-chic at the same time. Each bottle is lovingly handmade in France using rare ingredients like Sicilian Lemon, Damascus Rose and Italian Iris. Eau d’Hadrien, one of their signature scents, is inspired by the beautiful landscapes of Tuscany. Their bottles are tied in ribbon, and feature butterflies or crescent moons as stoppers. It all adds to the romance of this wonderfully modern French fragrance brand. Visit their stop to be whisked into their world of whimsical opulence, and if you’re feeling extra naughty there’s a range of lingerie to shop from too. 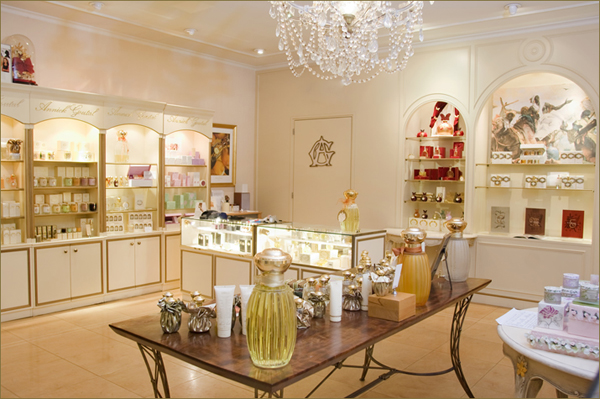 L’Artisan Parfumeur has an origin story like no other. It all began in 1976 when chemist Jean Laporte was asked to conjure up a banana-scented perfume to match a banana-themed costume for a cabaret dancer at the legendary Folies-Bergere. From bananas, Laporte went on to create grapefruit and vanilla-themed scents, his mastery of the chemistry behind scent making eventually earning him the moniker of ‘L’Artisan Perfumer’ from industry insiders. Fast forward to modern day, and you’ll find a much larger selection of unusual and unconventional scents should you visit any of the four ‘Perfume Artisan’ boutiques in Paris. Premier Figuier – one of their most iconic fragrances – maintains the pioneering spirit of the brand by being the first ever scent created around the scent notes of a fig. 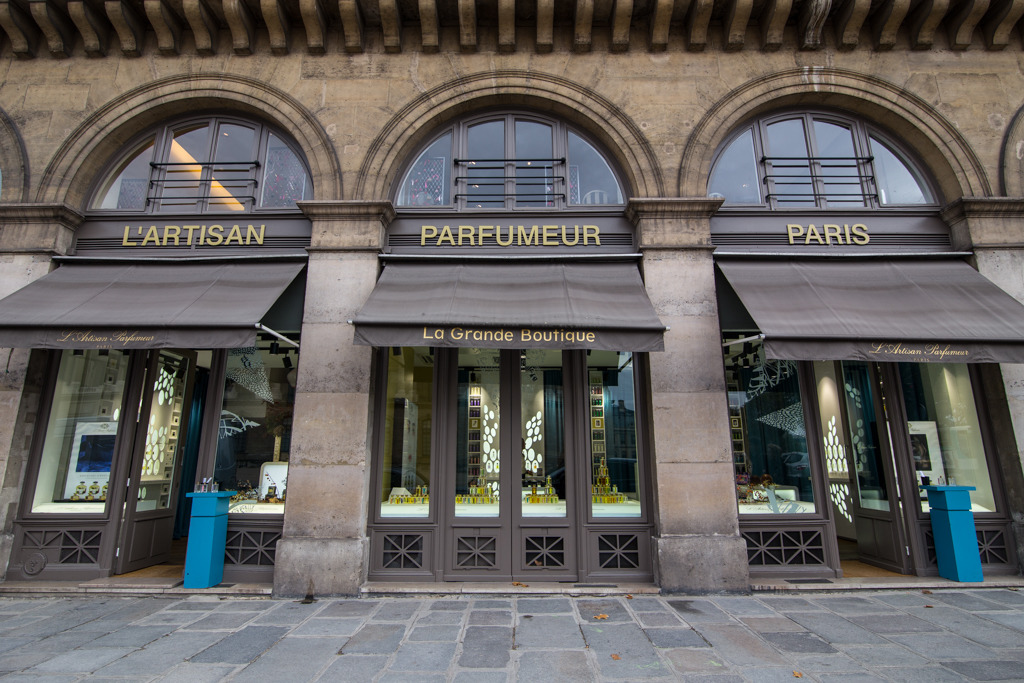 Frederick Malle was always destined for greatness. His mother was an art director for Dior. His grandfather was the founder of Christian Dior parfums. You could say creativity and fragrances was in his blood, and nowhere is this more evident than in-store. More than just a place to buy his delicate artisanal fragrances, every Frederick Malle store is all about maximising the experience. Walk into his flagship on Rue de Grenelle and you’ll find yourself in the Parisian apartment of a perfume-obsessed mad scientist, where fragrances are kept in specially designed refrigerator units. You’ll find smelling booths – ingenious spaces designed to give customers an indication of how each perfume smells hours after the initial spray has settled. These are just some of the creative touches that make shopping from Frederick Malle a very unique experience.  Further to this, Frederick Malle’s “Perfume Publishing House” program sees him collaborate with the world’s finest independent master perfumers to create a range of cult collaborative scents that you won’t find elsewhere. 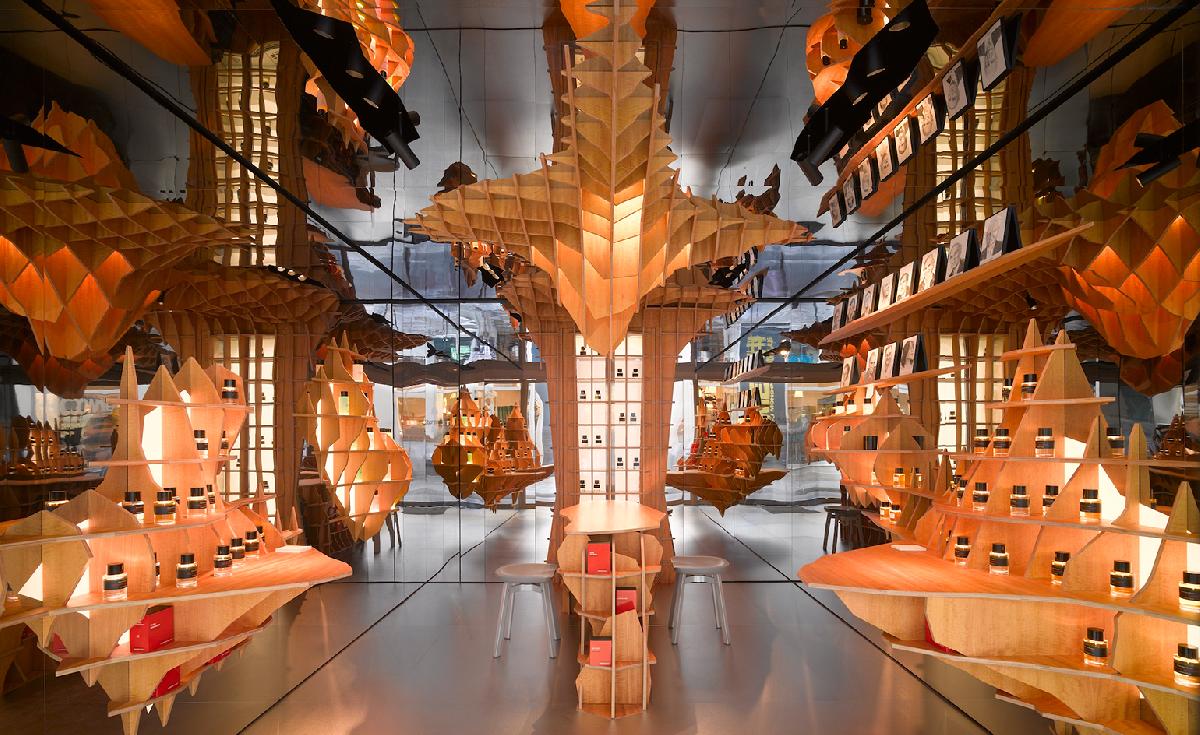 Le Labo sees itself as the link between the historic capital of French fragrance Grasse, and the creativity of modern day New York. Think contemporary luxury fragrances but made with the painstaking traditional craftsmanship techniques. Where flower petals are used, each is hand picked and blended rather than making use of machinery. Each scent is hand compounded in the centre of Paris, before hitting the shelves. When you buy a bottle of Le Labo, you watch as each scent is finished by hand in-store, before being labelled and passed onto you as if fate had brought you together. It’s this meticulous tactile approach that sets Le Labo apart from its peers. Visit each of their stores to find their sought after Paris-only exclusive fragrances. If you need help planning your route, why not check out our guide on how locals get around Paris. 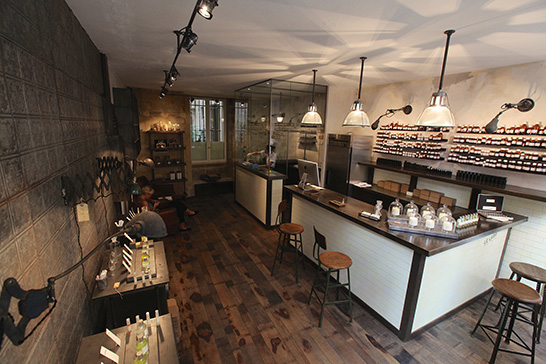 So Sephora might not be the most exclusive shopping destination in Paris, but it makes up for this in choice. The flagship on Champs-elysees is the largest in Paris and is your one-stop shop for not only fragrances, but makeup and skincare. With over 300 brands available, including the likes of Hermes, Dior, Givenchy and Chanel, you’re sure to find something you like. Sephora is a more down-to-Earth retail experience compared to some of the other names on this list, making it ideal for nervy shoppers who feel out of place in more luxurious establishments. 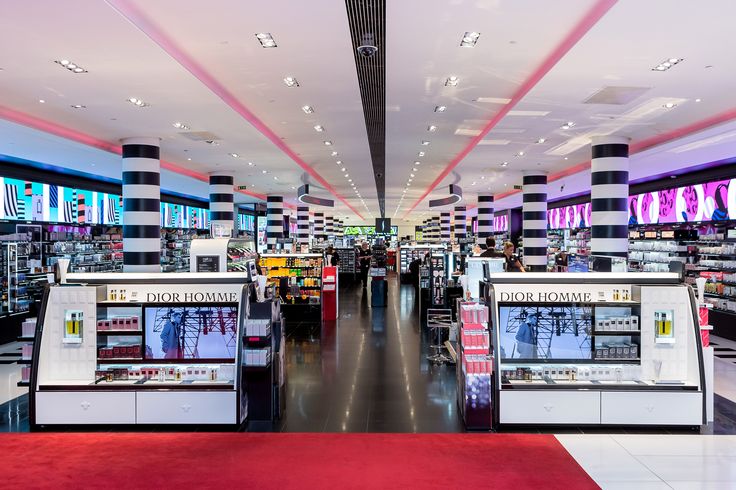