When people say that there is no such thing as British food, British people show them the Sunday roast. A plate of roast beef (or chicken or pork), roasties and a golden Yorkie is practically a national treasure. The Sunday roast is a weekend ritual for many and Londoners in particular take their roasts very seriously. After trying every roast we could find we’ve put together what we think is the definitive list for people on the hunt for a roast this weekend. Oh and we’ve sorted them by area to make it easier. Dig in…

Believe it or not, The Albion is a Georgian gem left over from a time when Islington was fields and farmland and people would take afternoon walks out of the city to visit the pub. Unthinkable now as it’s built up all around, but the country pub atmosphere still stands. It has a wisteria covered facade and log fires in each dining room and the food is just as wonderful as the surroundings. Book a table here for Christmas time and pretend you’re in the Cotswolds. 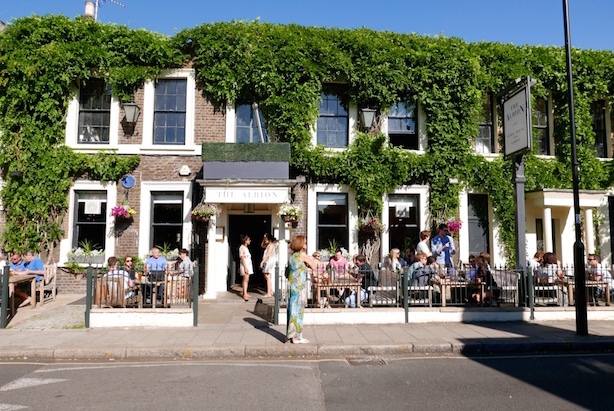 Canonbury in North London is sometimes seen as a bit of no man’s land between Stoke Newington and Angel, but it’s actually full of treasures. One of them being the Snooty Fox which is right opposite the station. This neighbourhood pub has a friendly vibe and the food they serve is restaurant quality. They always have a good vegetarian option too is it’s perfect for non meat eaters. 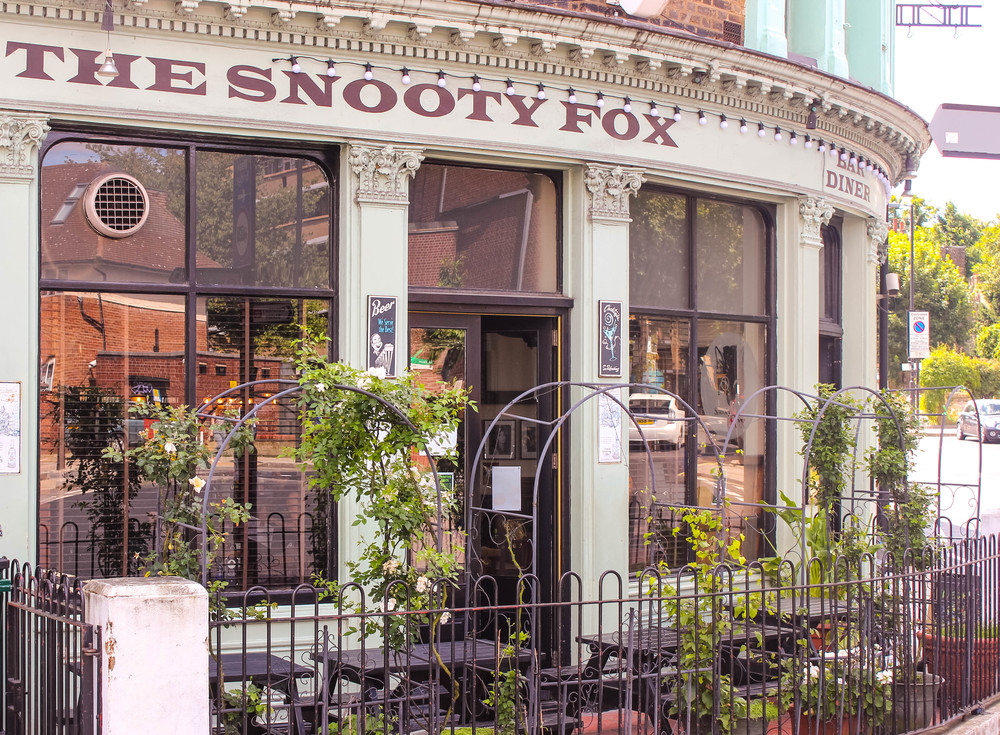 This Stoke Newington favourite serves up one of the best value Sunday roasts in London. For £9.95 you can enjoy a roast dinner with all the trimmings. The portions are also pleasingly big with Yorkshire puddings as big as your head. The pub is known for its craft ale selection so be sure to check out what’s on tap when you visit. 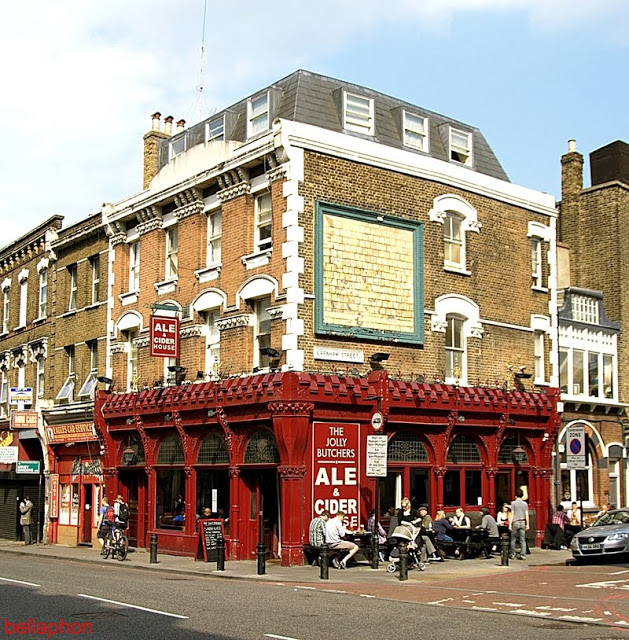 Source: London on the inside

We don’t like picking favourites, but if we had to, The Marksman might just be it. This pub is on Hackney road and underwent a facelift in 2013, bringing in an exciting new chef and a delicious new menu. This definitely isn’t cheap so might be worth saving for a special occasion but the beef is mouth-wateringly good and the desserts will leave you wanting more. 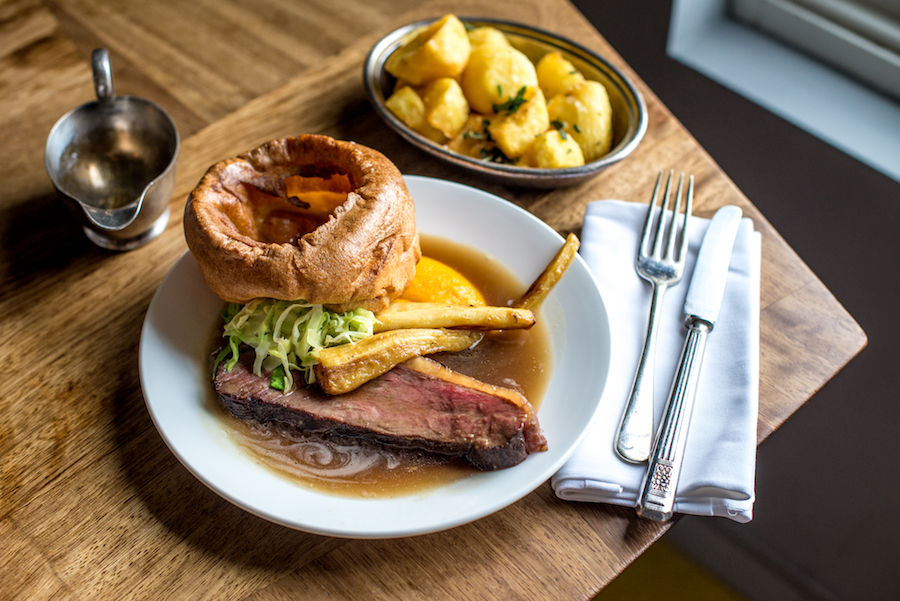 It has earned the title of trendiest place for a roast in London thanks to its laidback atmosphere and beautiful crowd. Situated in an old warehouse space in Dalston (so far, so trendy) it has a semi-open kitchen and pleasant buzz. The menu offers beef, lamb, pork and a whole roast chicken (for 3-4 to share), as well as a weekly-changing vegetarian offering. The sides are to die for and you can enjoy all this with a very reasonably priced bloody Mary. 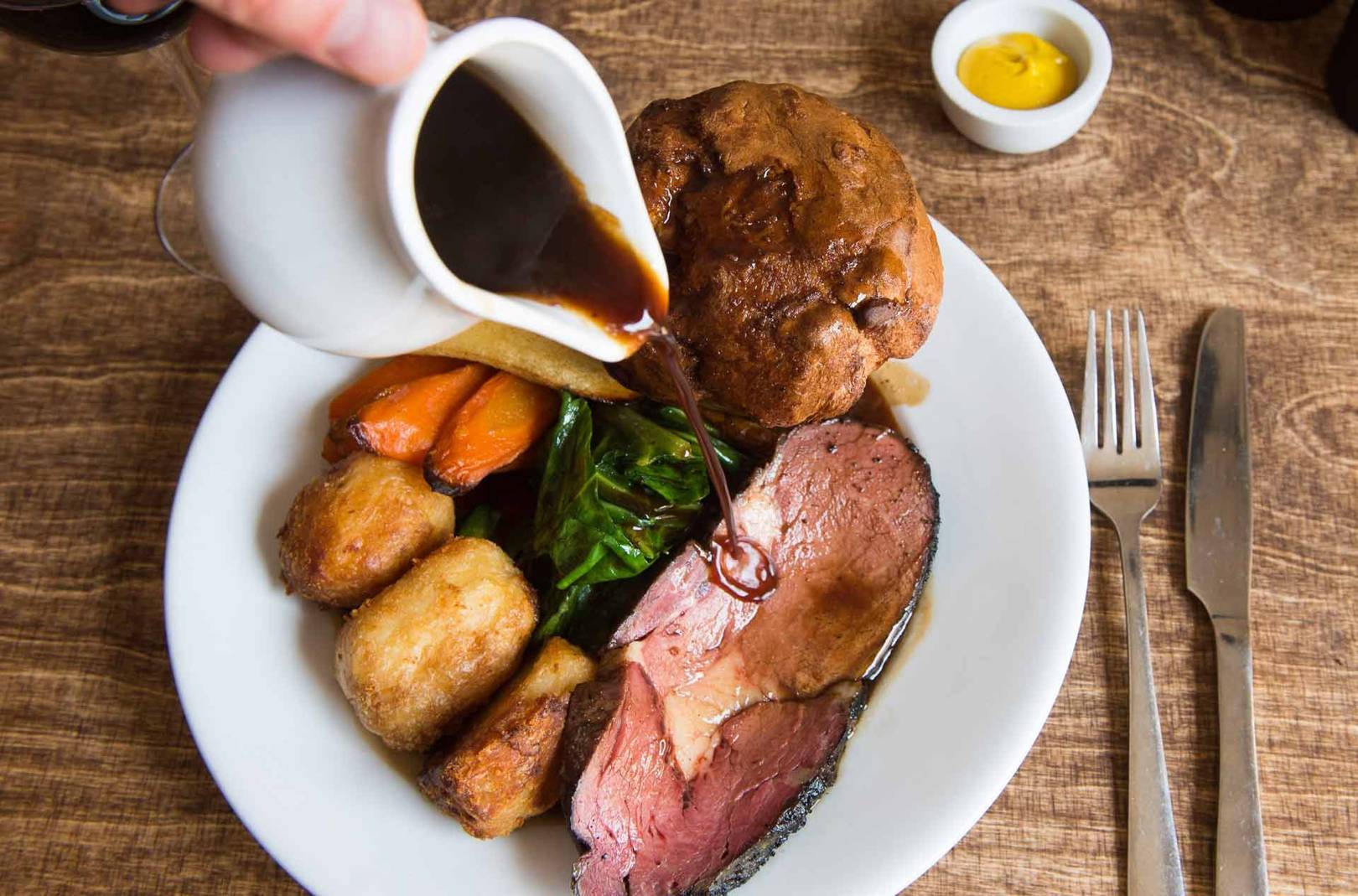 Sitting proudly on Columbia Road, The Royal Oak is one of East London’s best loved pubs. Because Sunday is market day, you’ll need to book as it can get busy. But it’s worth it. You can wash your roast down with something from their extensive wine list and then while away the rest of the afternoon cozied up in the corner watching the flower sellers outside. 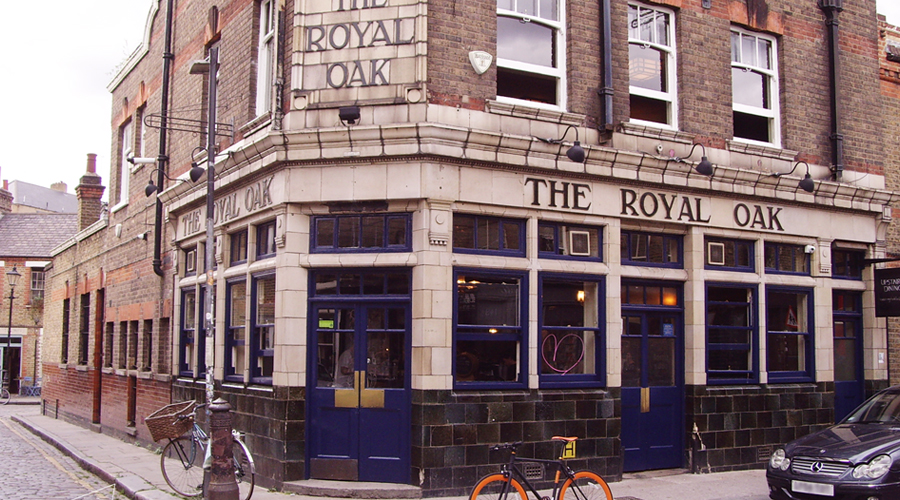 Not what you might imagine when you picture a Sunday roast but Tramshed does tradition with a difference. Housed in an old tram depot, the restaurant features an original Damien Hirst centrepiece and an art gallery downstairs. Order the whole chicken (enough for two hungry people) and remember to take a photo of it when it comes out. 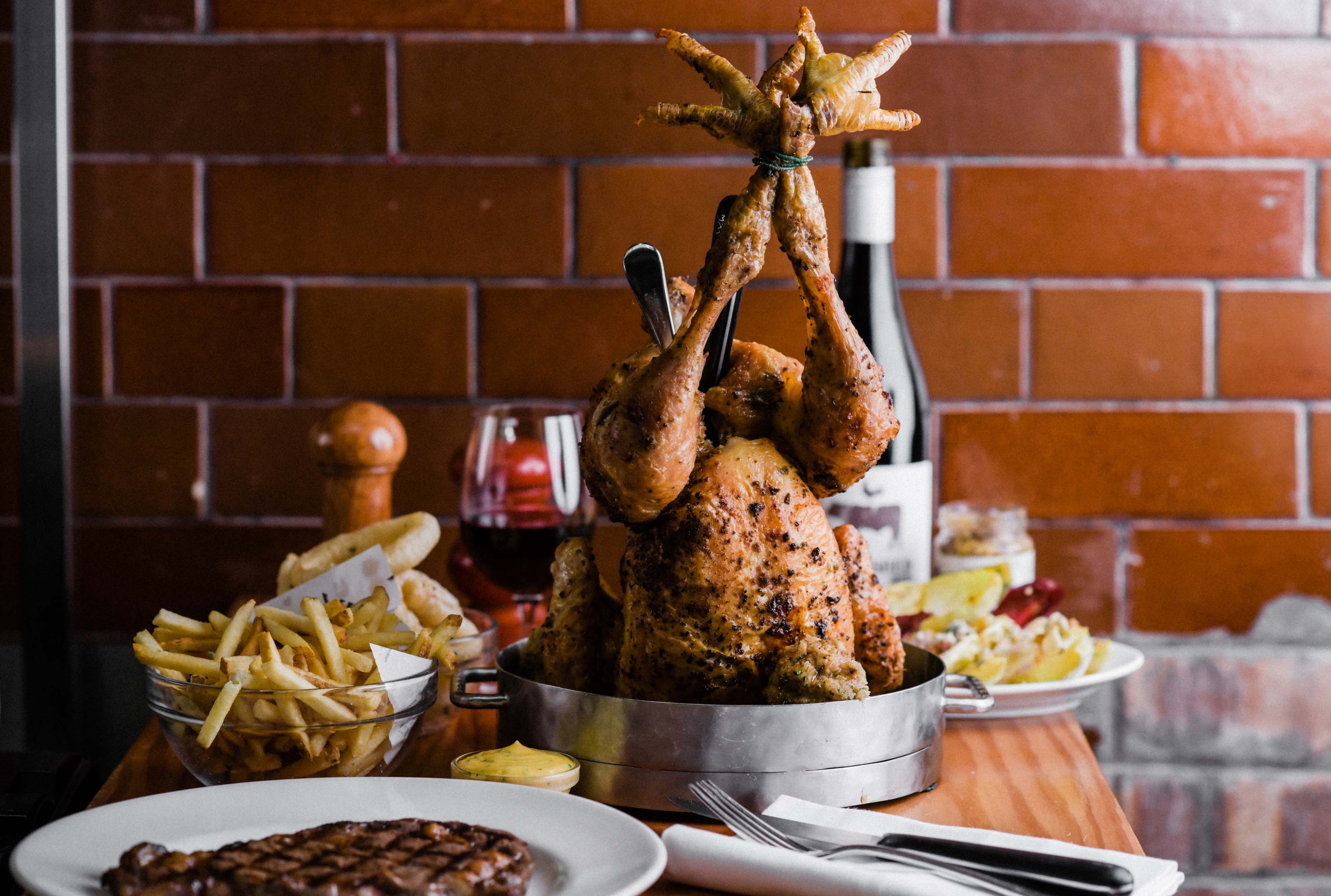 Found on a quiet street in Bow, this has the feel of a good East End boozer. The portions are generous and the atmosphere cozy and there’s a good choice of ales and beers to accompany your lunch. 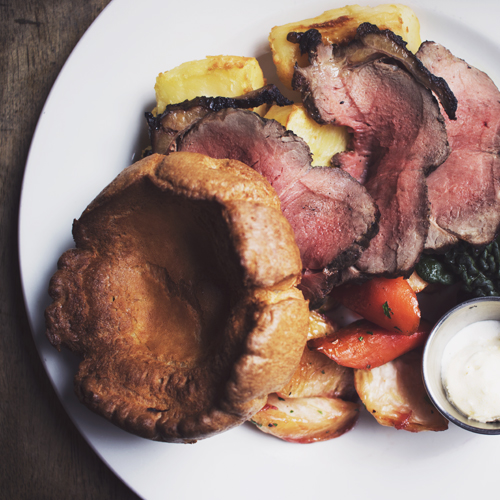 With branches in Soho, Shoreditch and the City, if you’re in central London you’ll likely be within walking distance of a Blacklock on a Sunday afternoon. When Blacklock opened they were aiming to serve the best meat Britain has to offer at the most affordable prices. And boy did they succeed. Choose between a range of the most delicious chops you’ll ever eat and order a selection for the table to share. The beef dripping chips also deserve a special mention. 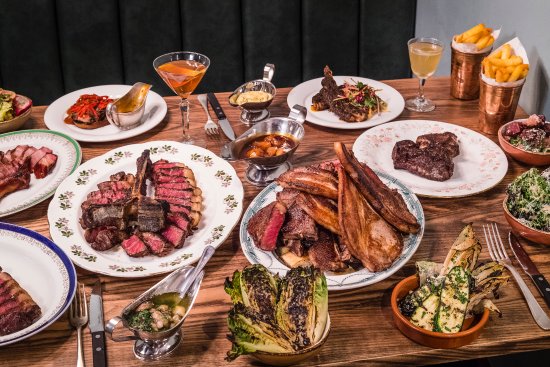 The Jugged Hare is just near the barbican which can be a bit of a dead zone on a Sunday, but we like the peace and quiet of the city on Sundays. It positions itself as London’s leading game restaurant so expect to find some on the Sunday lunch menu alongside the more classic beef and chicken options. The roasts are served with the traditional sides but you can order extras like pointed cabbage and bacon if you’re feeling particularly peckish. 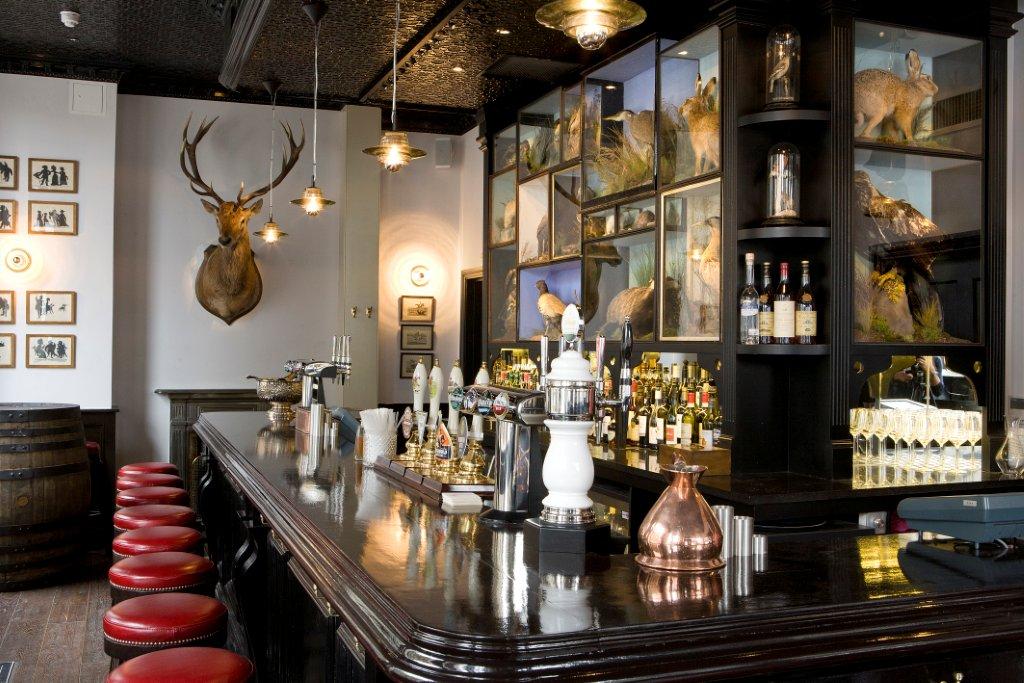 Hawksmoor has long been London’s favourite steak restaurant so it’s no surprise that when it tried its hand at Sunday roasts the results are pretty special. Try out one of their branches dotted around the capital (Covent Garden, Mayfair, Borough, Shoreditch) and enjoy the best roast beef you’re ever likely to try. They also serve a selection of non traditional sides like Mac and cheese. 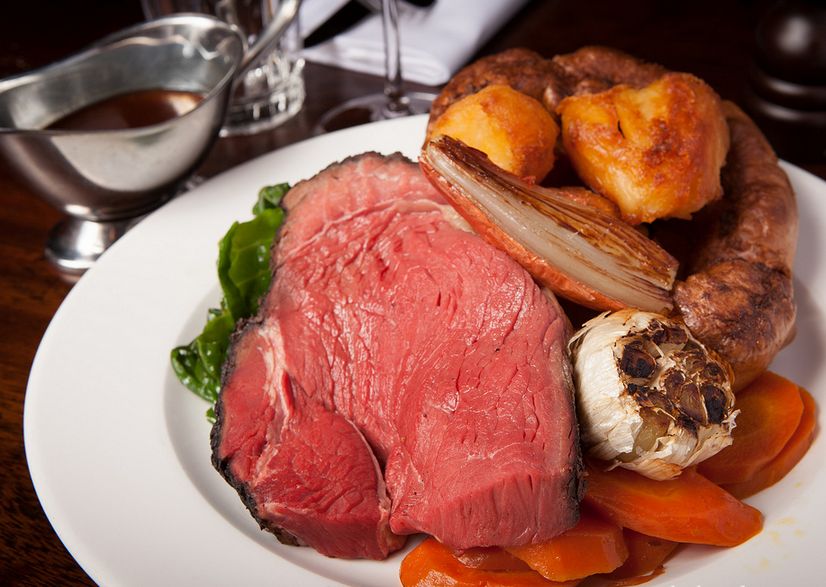 Make your way to the Guinea Grill on a Sunday afternoon and you’ll almost feel like you’re a resident of Mayfair. One of London’s most bijoux areas. Open since 1952, it’s one of London’s original steakhouses and does a first-rate pork or beef roast. The Guardian commented that if this was a new opening it would be full all the time, but it’s discreet old school charm means you can usually still get a table. 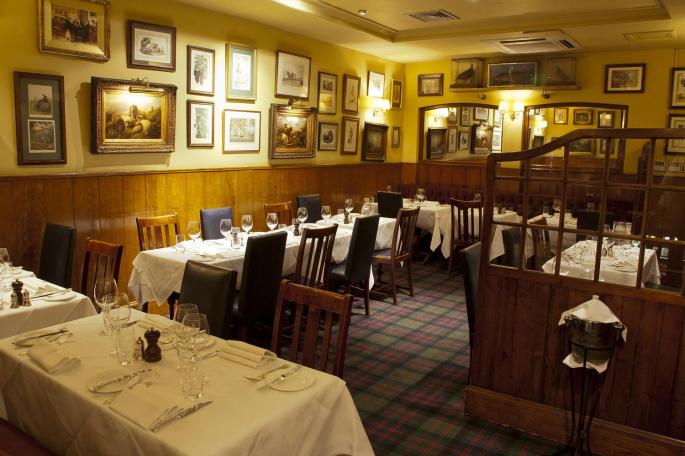 This Borough Market restaurant does what it says on the tin. Every Sunday it serves up some of the best roasts in the capital with a focus on beef. The prices reflect the quality so don’t expect this to come cheap. 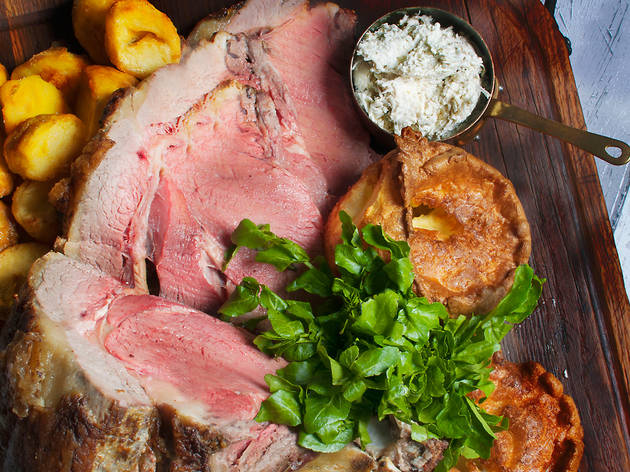 This award-winning neighbourhood pub specialises in high quality produce and simple cooking. So it’s no surprise that the place is crammed Sunday after Sunday with hungry Londoners looking for a roast. Settle down here for the day with a group of friends and enjoy working your way through the wine list. 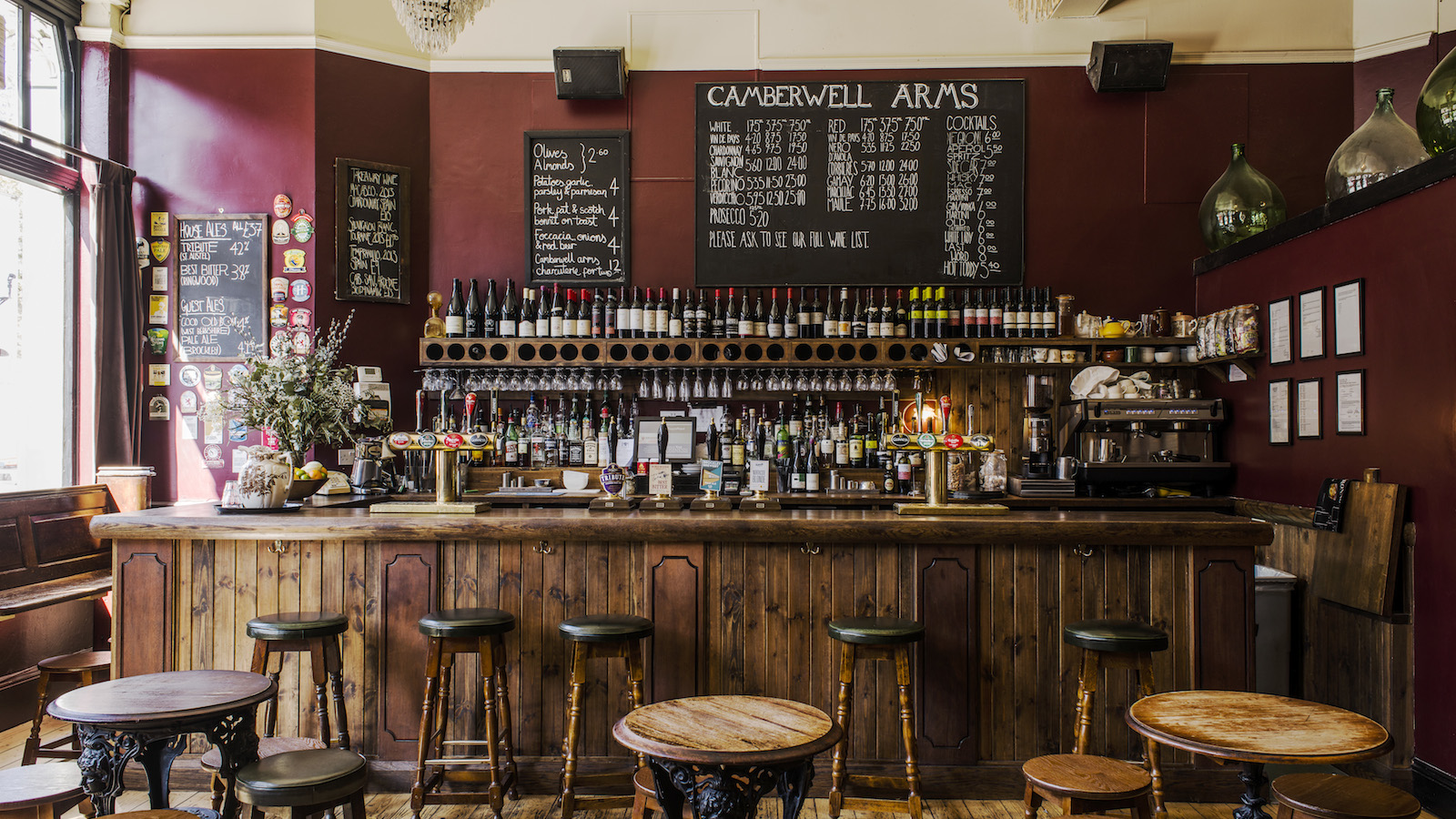 Housed in the former Peckham Rye train station ticket office, Coal Rooms is the latest culinary addition to Peckham's ever expanding dining scene. This refined yet relaxed bar, restaurant and cafe does a roaring trade in Sunday roasts with pork, beef and the more unusual goat on offer. They also have a whole roasted chicken for two. Head here to see London’s young and trendy enjoying their weekend. 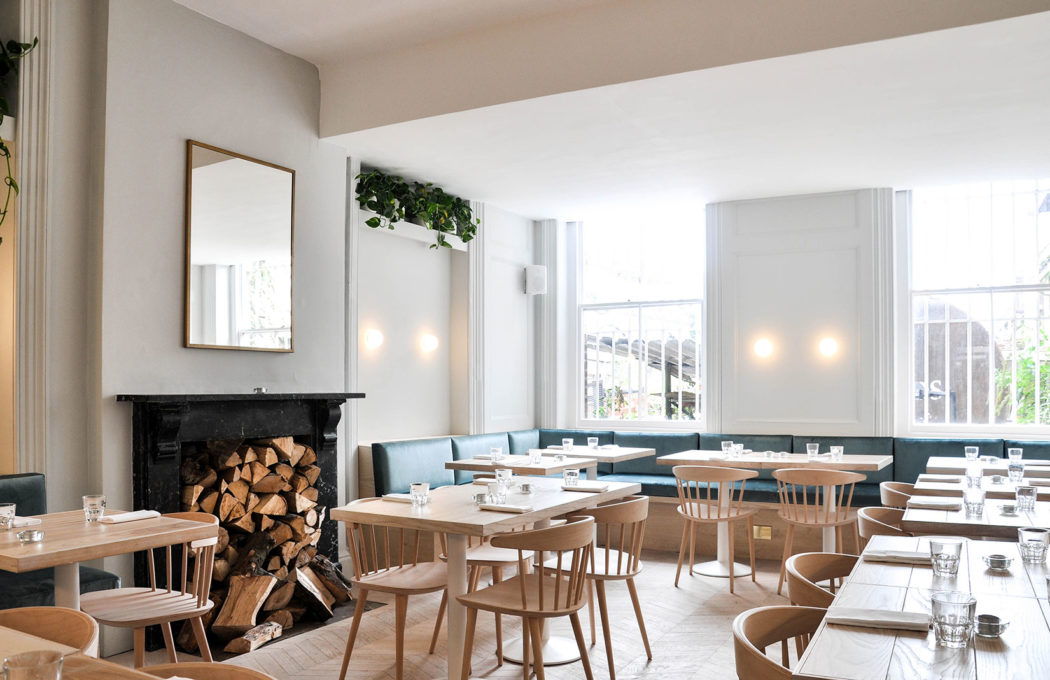 Bermondsey Street has to be one of London’s most pleasant roads and The Garrison is located right on it. Wonder over from London Bridge station and enjoy the Sunday roast at this Bermondsey institution since 2003. The bright and airy dining room is just as nice in the summer months and the roasts will leave you full and satisfied. Check their ever-changing specials boards to help you decide what to have. 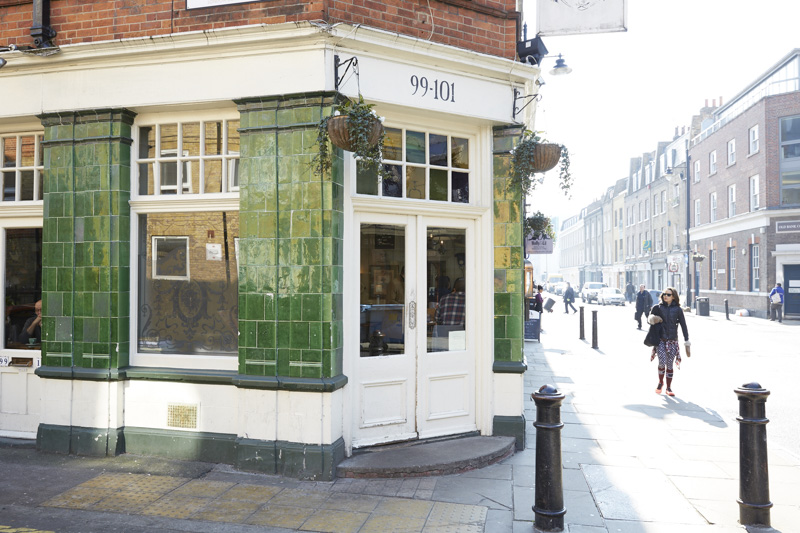 Clapham can get a bit of a bad rep but it’s actually full of very nice pubs and dining experiences. The Mediterranean inspired menu at Bobbin is full of fresh flavours and the Sunday menu reflects this. While you can always order the classic roast beef there’s also pan fried sea bass and grilled Italian sausages on offer. 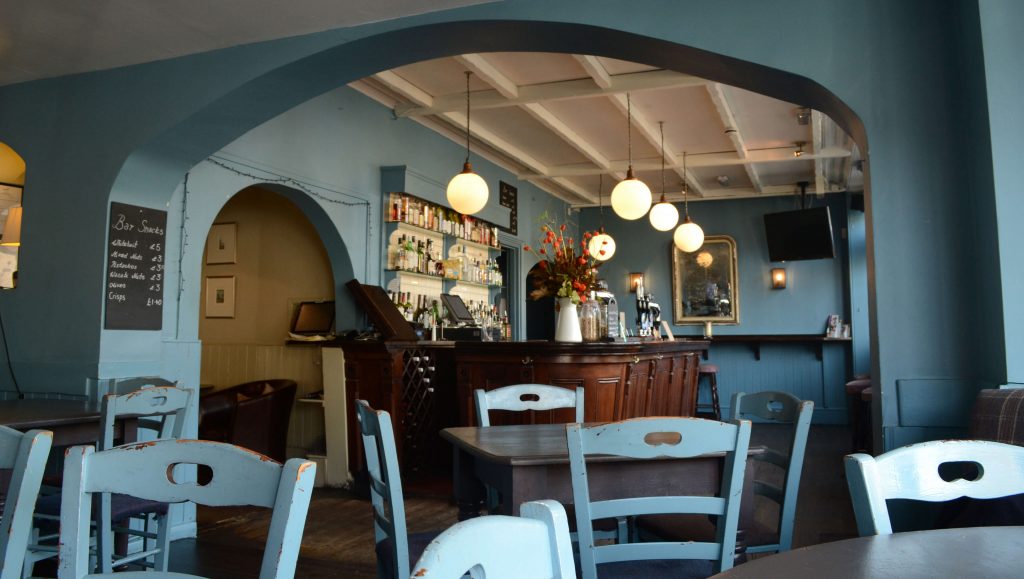 The Canton Arms has gained quite a reputation among foodies for its signature foi gras toastie. But it shouldn’t be written off as a fad or one hit wonder because their Sunday roasts are brilliant. They don’t take bookings though and its perennial popularity means you’ll need to get here early if you want a table. 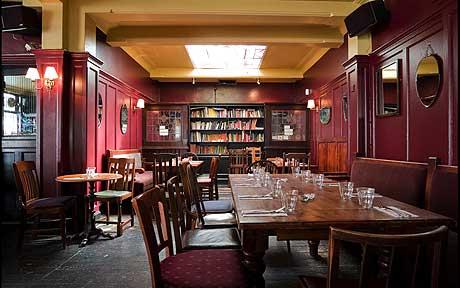 This family friendly pub is perfect for taking little ones to as they’re always happy to cater to smaller appetites. But the adults are in for a treat too. Their Sunday roasts are of the traditional variety, served with roast potatoes and Yorkshire puddings. The beer garden at the front is perfect on warmer afternoons and you can even bring your dog.

The Mall Tavern in Notting Hill is very busy and very loud but that shouldn’t stop you having a great time and actually makes it a great place to head with friends for a boozy Sunday lunch. The French onion soup to start is gooey and delicious and the pork belly and beef roasts come in such huge portions you might not be able to fit in dessert. 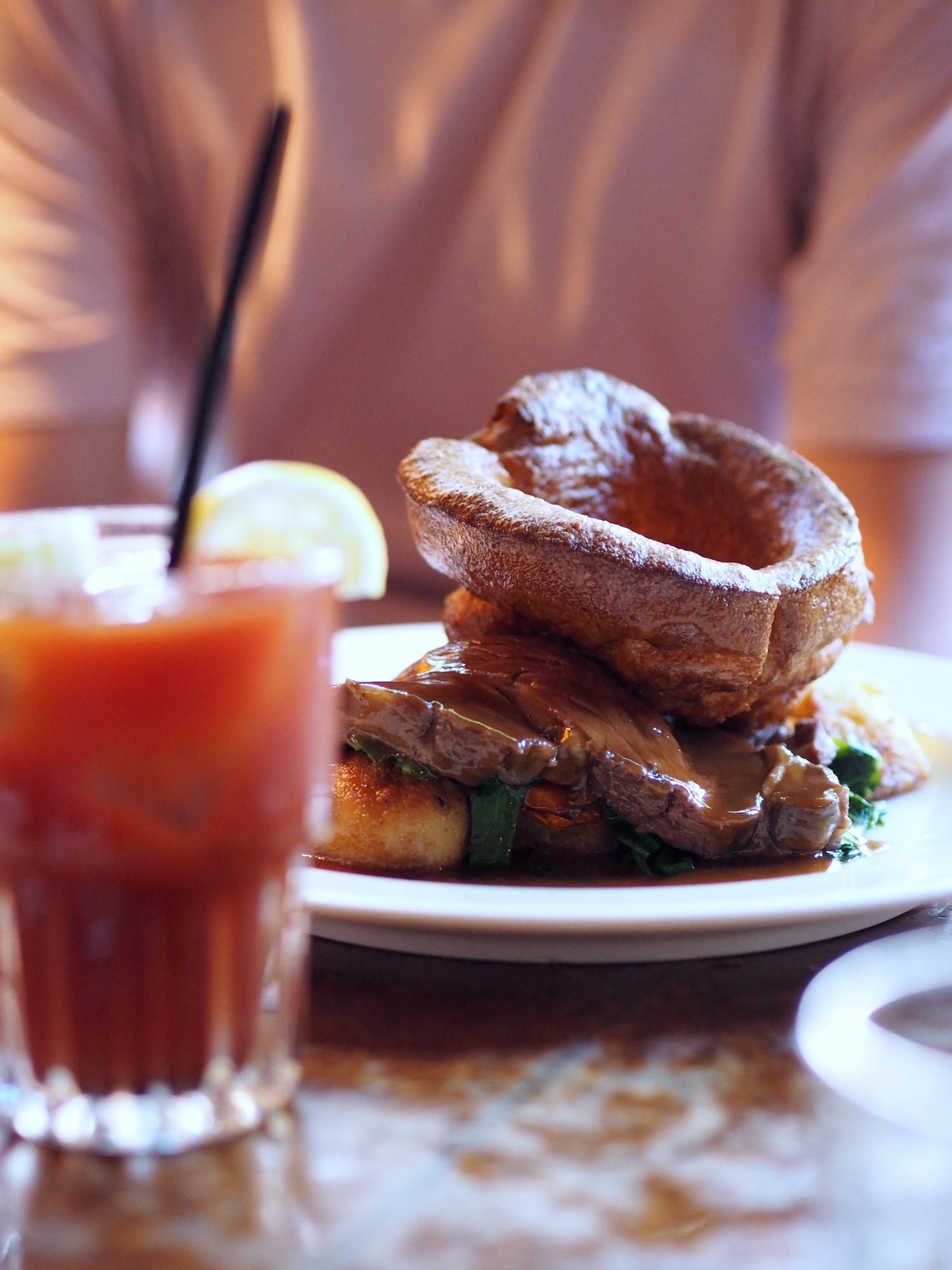 If you’re feeling very adventurous, head out to Ealing in the wild west. It will be worth it for a roast at the The Grove. This charming pub serves up huge portions of all your favourite meats and also has good vegetarian options. Our favourite bit is the shuffleboard at the back of the pub. So make sure you have enough energy after lunch to play a few games. 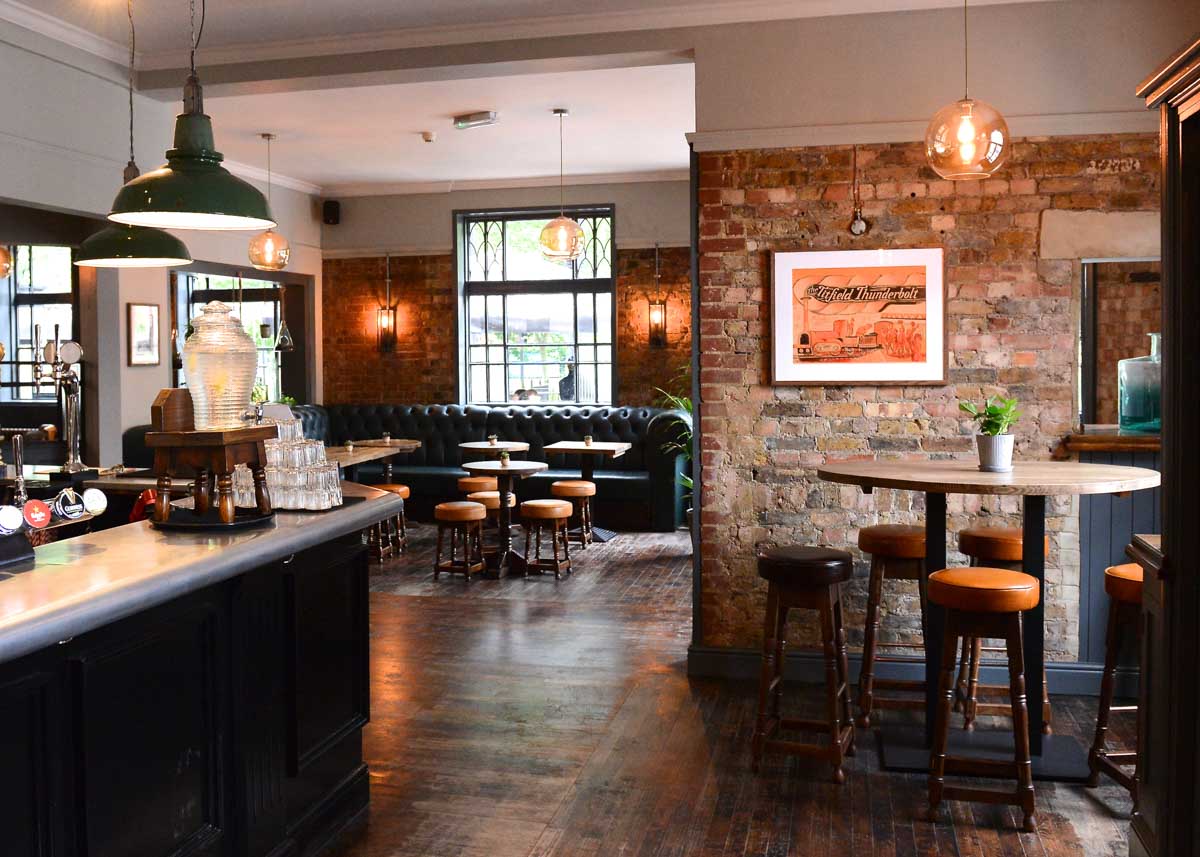