The beautiful Greek island of Kefalonia is a paradise that not a lot of people probably know of. At least, not in the same magnitude as the popular destinations of Santorini, Mykonos, and the like. However, what it may lack in popularity it certainly makes up for its stunning coasts. Kefalonia is practically made up of scenic beaches as far as the eye can see. These natural wonders and the magnificent views they offer are second to none. So much so that you'll probably want to move to the island yourself! Among its most beautiful coasts, here are the most noteworthy. 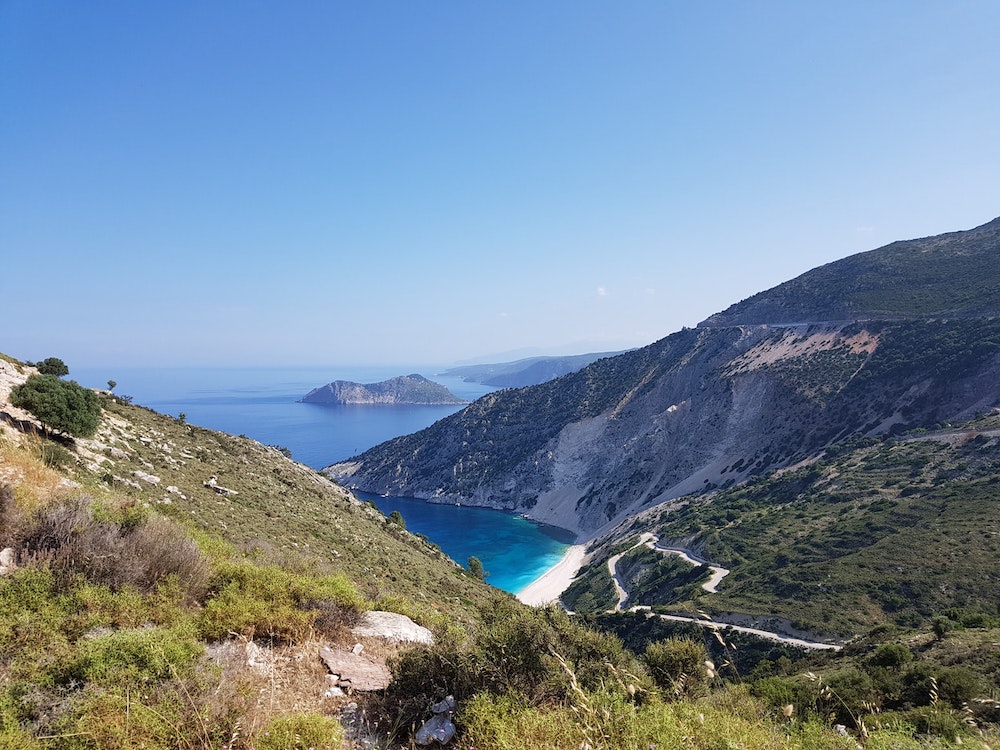 Where to start with Platia Ammos beach? Do you want to focus on the place's unique crescent shape which looks so precise, you'd think that a godly artist made it with a paint brush? Or how about the stunning gradient tones of the sea, which starts with a gentle light shade of teal and gradually fades into a deep dark shade of ocean blue? Oh, and let's not forget the greenery-topped mountains that line this remote coast, almost serving as a blockade of sorts from the rest of the island. To say that the coast of Platia Ammos is beautiful is an understatement! 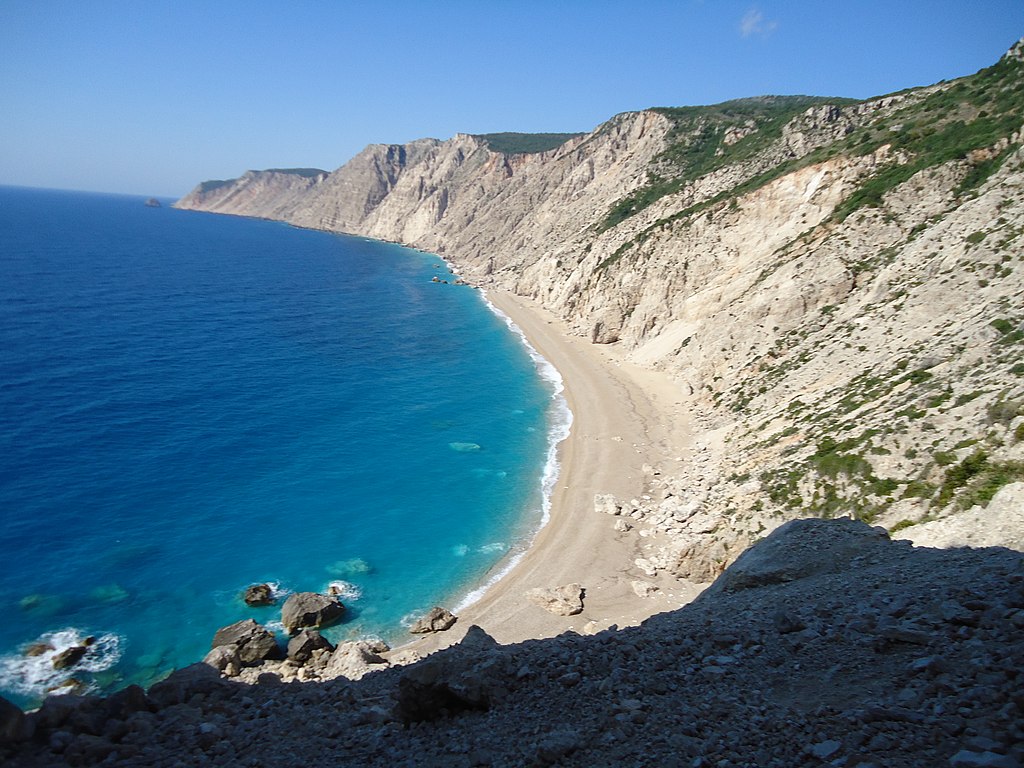 Located a hop and a skip away from the capital city of Kefalonia, Argostoli, a wide shoreline makes up two beaches that have become the most popular on the island, Platis and Makris Gialos. Its names Platis, which means 'wide' and Makris, which means 'long' perfectly describe their most distinct qualities. But while one may seem better than the other, both remain the paradisical shorelines that you'd expect from a Greek island. Golden sands, turquoise waves, and lush greeneries all around. Most notably, however, the beaches are also popular for watersports, rivaling those in Paros when it comes to garnering a lot of active fans. 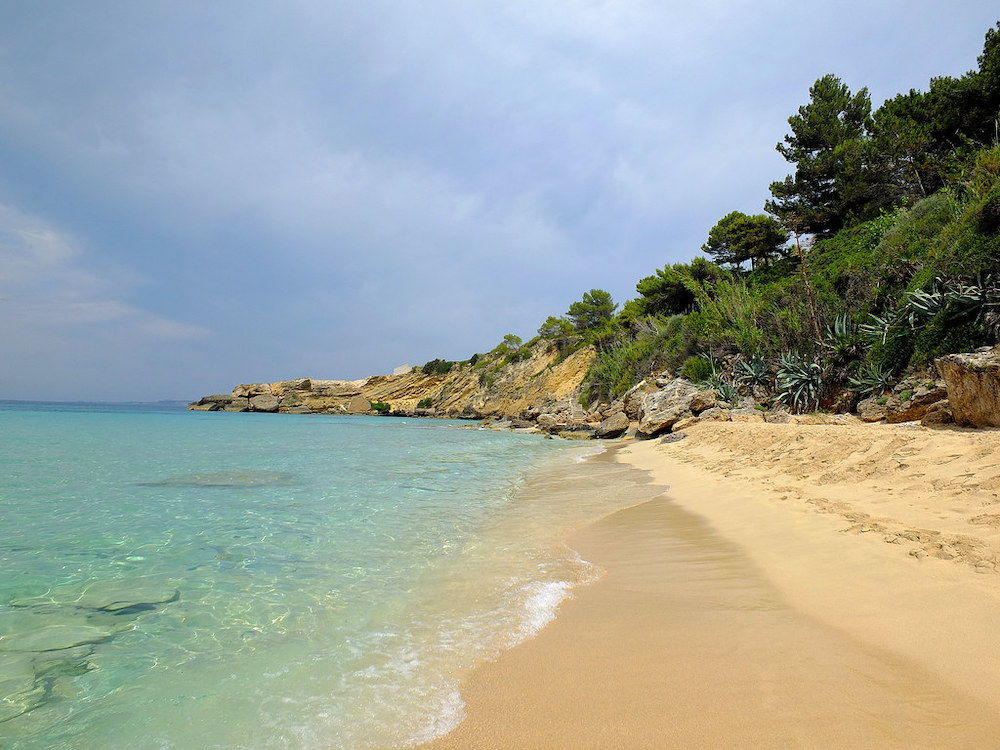 One look at Myrtos beach and you can already tell why it's one of the most popular coasts in Kefalonia. The entire place is a feast for the eyes, what with the white sands of the shoreline, the gradient shades of blue of the Aegean Sea, and the well-forested mountains that surround the beach. It's the type of scenic beauty that'd you'd normally see on postcards and travel magazines. Or even on an Instagram post too! Yet, despite its famous beauty, the beach itself remains more remote than the others on this list. The serenity here allows for those lucky enough to go here to spend an entire day in the sun with little to no crowds in sight. 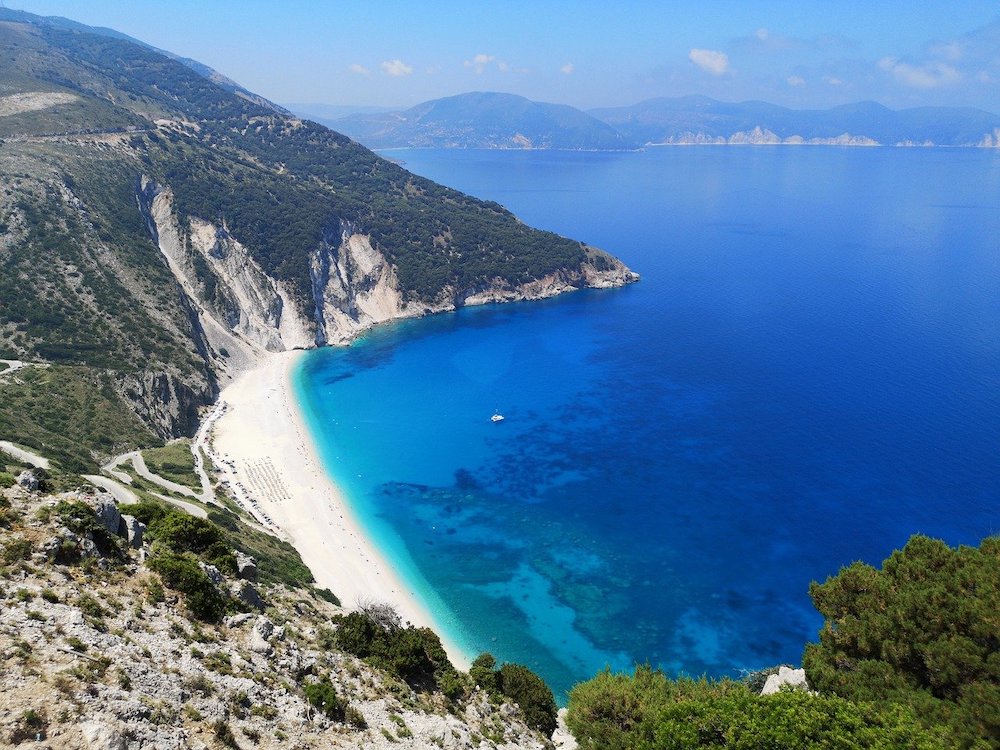 Another picturesque Kefalonia coast worth visiting for its beauty alone is Spartia beach. Located in the southern part of the island, it'll be a challenge to get to via public transport. But once you see its astonishing landscape, you'll realize that all your efforts weren't in vain. Although the shoreline itself is a meager stretch of sand, the high cliffs that line the coast make for quite the sight. You'll likely spend more time marveling at the natural wonder and taking pictures than relaxing at the beach. Nevertheless, since Spartia beach is also one of the more remote coasts in Kefalonia, you get to enjoy this place as if it were your very own! 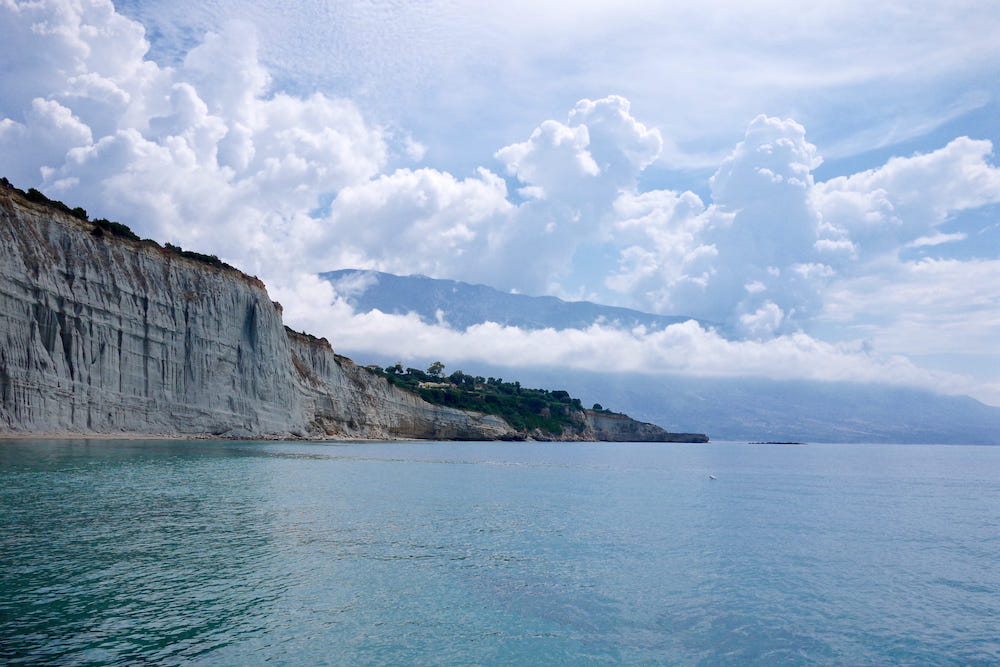 In the nature-filled resort town of Skala, one of the central cities in Kefalonia, its namesake beach serves as one of the more family-friendly coasts on the island. The waters here are pretty shallow and your little can swim and splash around to their hearts' content. Moreover, Although it's one of the busier coasts on this list, you can still catch a semi-private spot that's a fair distance away from the crowds. It's almost weird how this three-kilometer expanse of sand and sea looks so spacious despite the various commercial areas, resorts, and the like that line the beach. 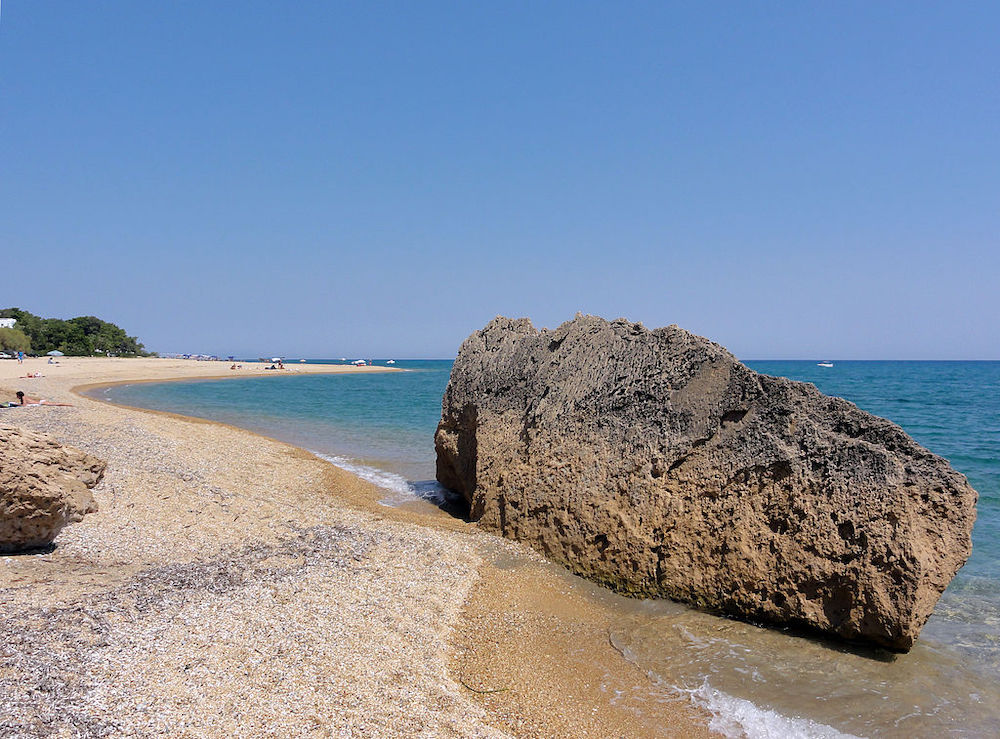 The natural wonder that is Dafnoudi beach is one of Kefalonia's best-kept secrets. Nestled near the forested areas of Fiskardo, you'll have to walk on an 800-meter long pathway to get to this remote coast. It's not exactly that reachable via public transport but it's okay! All your efforts will be worth it once you see the stunning natural beauty of the place. You won't know where to look first! Do focus on the compact shoreline with sand as white as snow? Do you gaze at the gradient sea in all its sparkling jewel tones? Or do you marvel at the tree-filled forests that surround the coast? 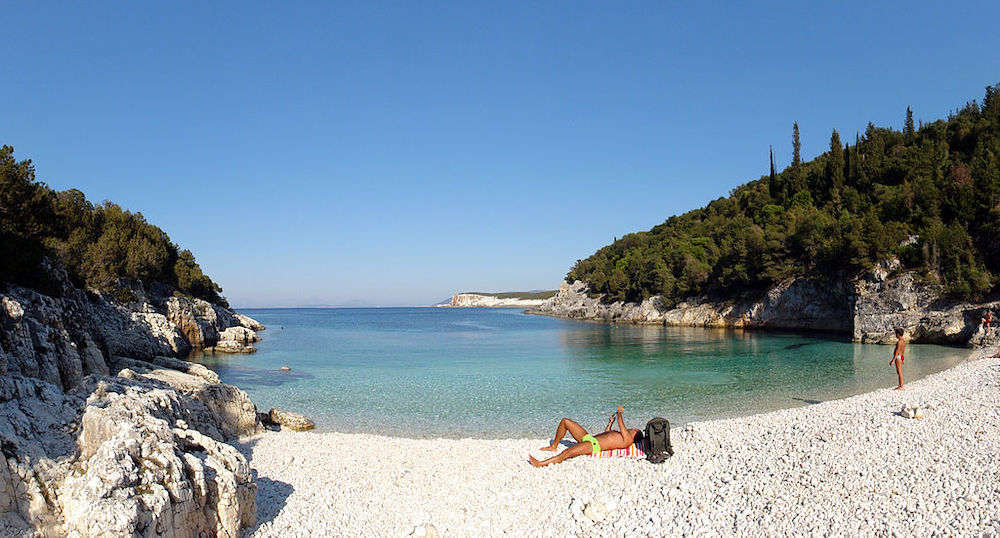 Speaking of gradient seas, look no further than the famous Antisamos beach to see another one in person. Boasting what may be the cleanest waters in all of Kefalonia, the natural fade of deep blue to light teal is extraordinary. Unlike in other coasts where the colors of the waters change depending on the waves, the sea by Antisasmos coast retains a natural glow forever. And it's a testament to the area that, with so many beach bars, restaurants, resorts, and the like on site, that they're able to operate and leave the waters as clean as can be. Kudos to them! 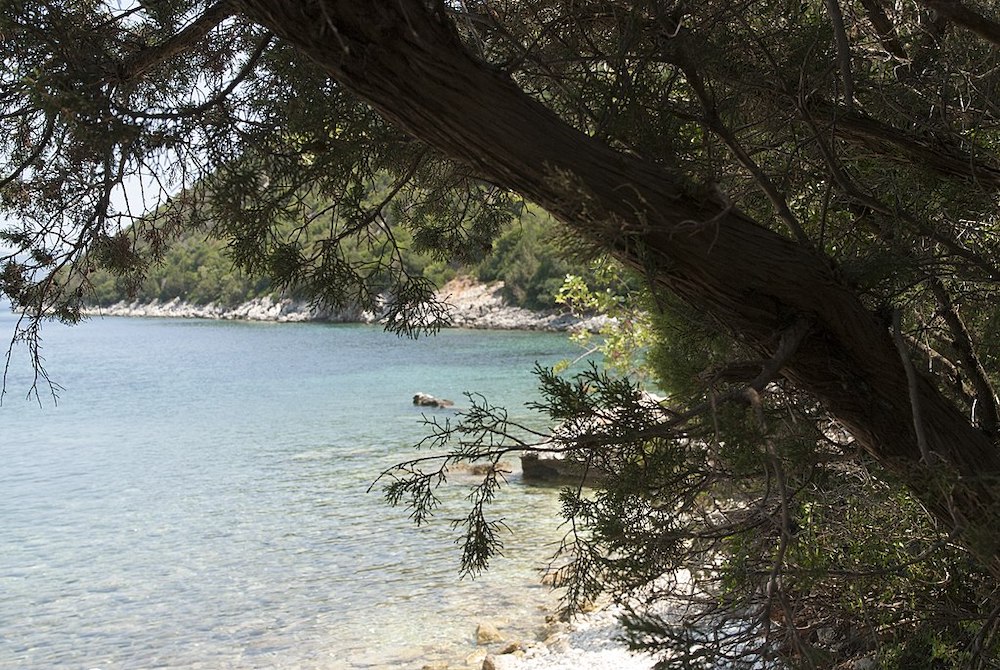 Located on the northwest of the Paliki peninsula, Petani beach is another coast with such stunning waters. This time around, the gradient effect isn't as obvious, but the light shade of seafoam green by the shore can easily remind you of watercolor paintings. You know, the type that you'll see in the art museums in Paris and the like. Contrasted with the forested mountains nearby, the entire place is a pretty as a picture. And it'd make for a great Instagram post, that's for sure! Make sure you charged your devices before getting here. You'll want to snap away even from a mile away! 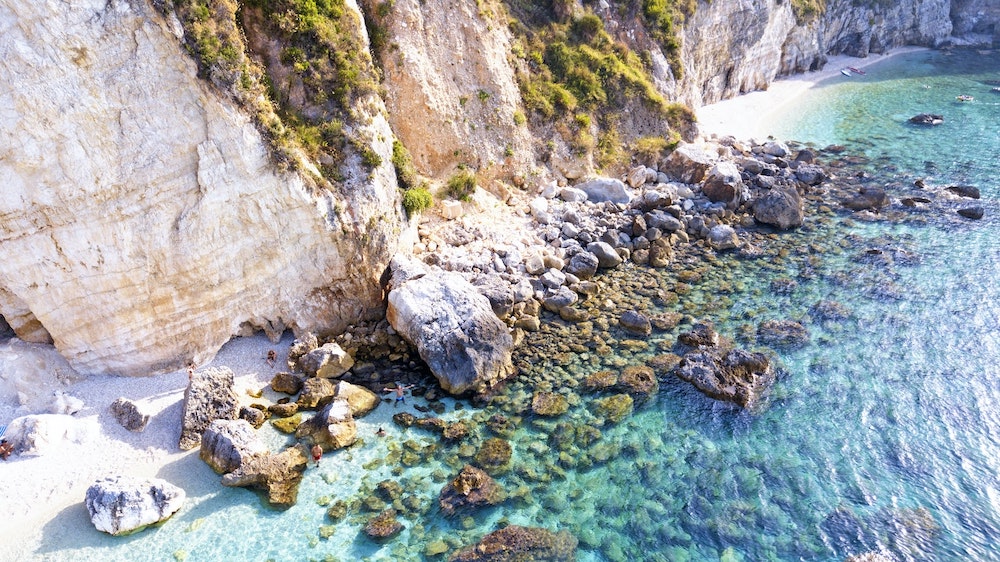 You've heard of the Red Beach in Santorini, right? Well, you can say that the Xi coast in Kefalonia is this island's version of that. Though the place itself isn't as 'rosy' as the one in Santorini, its orange glow is worth noting nonetheless. The fiery shade that renders the shoreline, contrasted against the sapphire-like seas, almost looks like it's lava. Nevertheless, although it's not a white sandy beach, the Xi coast remains popular for tourists and locals alike. Those who don't mind the blindingly orange hue can relax, unwind, and have fun here. Especially since there are a ton of establishments nearby. 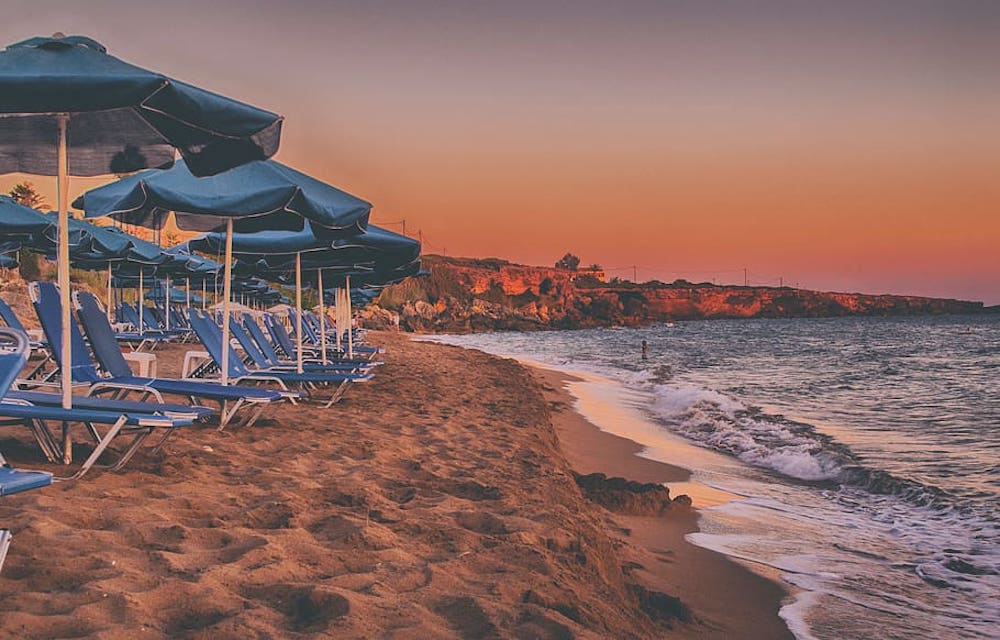 If you're lucky, you might get a luxury home near any of these amazing Kefalonia coasts.