10 of the Best Things to Do in Monaco

Globally known for annually hosting one of the most prestigious automobile races in the world, the Monaco Grand Prix, the Mediterranean principality of Monaco has definitely more to offer than being a playground for the rich and famous. It prides itself in its great food, marvelous Mediterranean views, exotic gardens, and a surprisingly laid-back vibe that is perfect for relaxation and enjoyment. If you're planning to experience some Monaco holidays, this guide will help you get set up and look forward to a grand vacation at Le Rocher.

The principality of Monaco is considered the second smallest independent state in the world next to the Catholic city of Vatican. It has been considered independent since 1861 and its monarchy government is headed by the principal ruler, the Prince or Princess, not the typical King or Queen.

Despite being a very small country at only 2 square kilometers, the country exudes royalty and richness. In fact, 30 percent of its population are millionaires. Various languages are spoken including French, the most widely used, Monegasque, English, as well as Italian.

Fortunately, you don’t have to raid the bank to have a great holiday in this European city. Here are some of our most recommended things to do around this charming city-state, most of which are free! 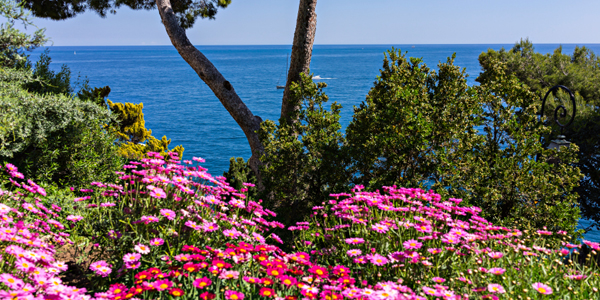 The park is conveniently accessible by bus and is surrounded by plenty of tourist shops and restaurants if you fancy a fruit shake or a waffle.

Both tourists and locals mix in the throng of park-goers, enjoying the view, taking a walk, and taking photos of the romantic statues around the gardens. Its calming and breezy atmosphere is especially welcome if you're visiting during the hotter months. 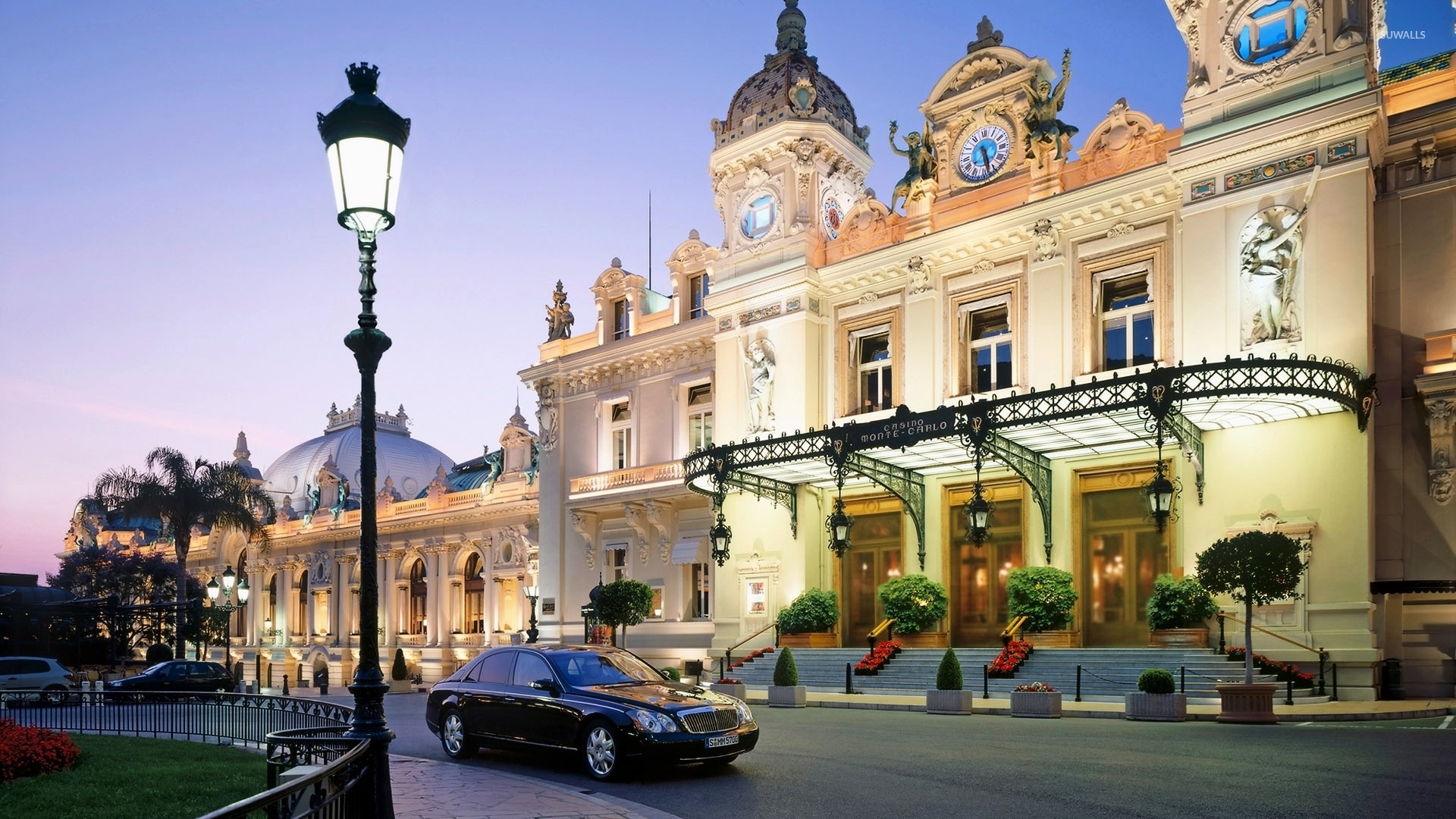 A playground for the wealthy, it’s no surprise why Casinos around Monaco are among the hot spots in the country. Head over to the Casino Square in Monte Carlo. This small square sits outside the legendary casinos, opera house, cafe Paris, and shopping mall. Very recently, the square has now been occupied by a modern sculpture called The Sky Mirror by Anish Kapoor.

If you want to witness the wealth of Monaco in action, this is the perfect place to see it all. If you don't want to spend, you can join the crowd who frequent the square mainly to look out for the Lamborghini's, Rolls Royce's and Porsche's parked outside the casino doors. It's also a great place to people watch and spot celebrity faces. There are little shops and restaurants around so you can conveniently grab a bite or get some refreshments anytime you like.

The Square is best to visit during late in the afternoon or during the evening and is perfect to just relax and take in the beautiful surroundings.

Looking for the best Monaco apartments in the French Riviera? Let us help. 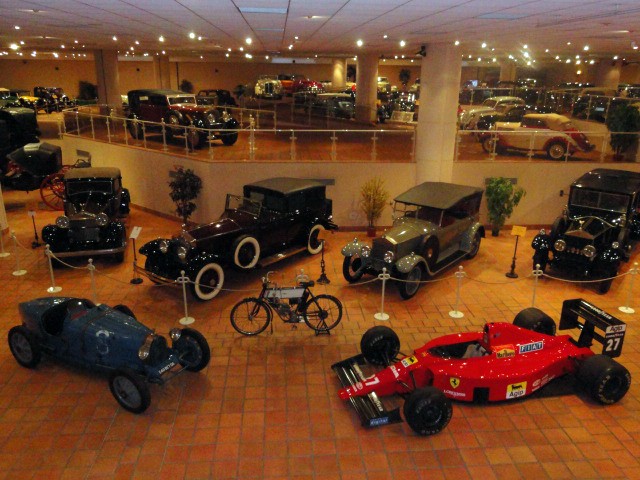 This huge collection of antique automobiles is by the car enthusiast Prince Rainier III who started collecting old cars at the end of the 1950s. As his hobby grew, he soon found the garage at the Prince's Palace too small to contain all of his cars. Finally, in 1993, the Prince decided to share his rare collection to the public.

If you really like cars or you're visiting Monaco during the Grand Prix season, a side-visit to this antique museum should be on your list.

You can get there by coach or car. It's recommended that you park at the Parking de Fontvieille which has direct access to the Terrasses de Fontvieille by lift and escalator. If you're coming by bus, make your stop at the Centre Commercial Fontvieille or if you prefer walking, the museum is a 5-minute walk from the railways station and 20 minutes from the Casino Square.

Admission costs 6.5 euros for adults and 3 euros for children aged 6 to 16. It might be a bit expensive but the collection of over 100 unique antique cars makes every euro well-spent. 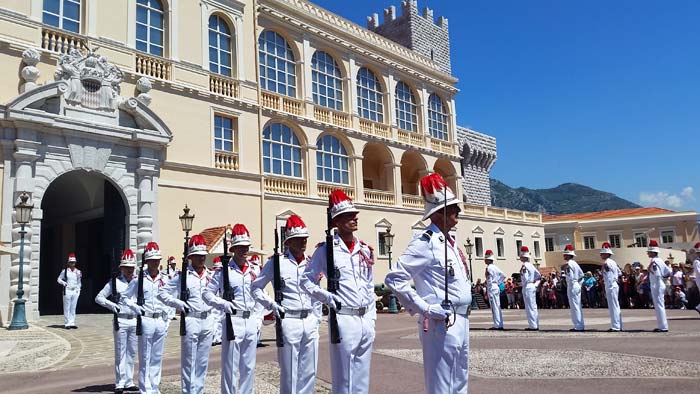 Although it’s considered tradition and would be done so with or without any audience, the Changing of the Guards ceremony at the Prince’s Palace still hauls throngs of tourists and is considered one of the main attractions in Monaco.

Every day at 11:55 am, the traditional ritual takes place. Uniformed guardsmen do their brisk-and-crisp salutes and walks to the delight of the crowd on the vast square of Place du Palace. If this seems like something you don't want to miss, head into the steep winding streets in the old part of the city and follow the signs to the Prince's Palace.

During peak tourist seasons, the spectacle attracts more than just a handful of people so if you want to get a good spot for viewing or photos, you might want to head there early. The whole display lasts for about 10 to 15 minutes.

The Prince's Palace is the royal residence and home to the current head of Monaco's monarchy, Prince Albert and the royal family. Around the square, there are quaint little shops to buy souvenirs from. 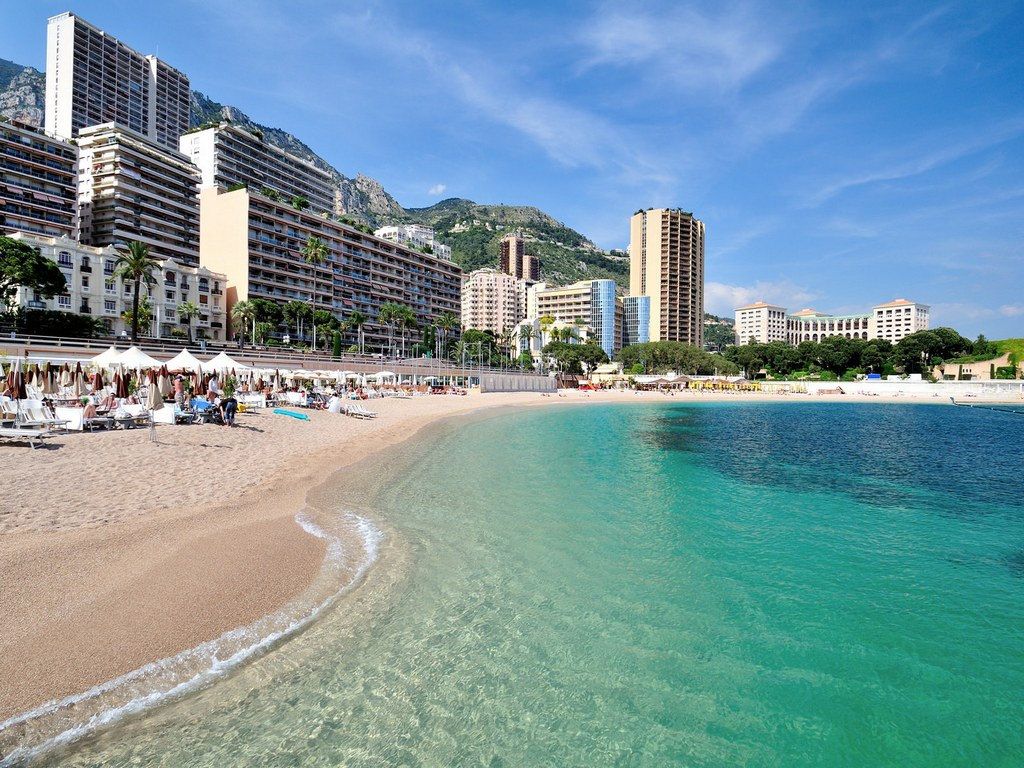 One of the beaches of the French Riviera, the Larvotto Beach is a frequented summer destination for tourists and locals in the area. The beach is divided into private and public sections. The water is nice and warm and there are cafes all around.

As you’d expect, the beach becomes crowded during the summer season but a lot of people come to the area not to swim but to people-watch. It’s great for a relaxing stroll along the coast, especially if your crammed vacation time does not give you enough time to explore other beaches outside the city. 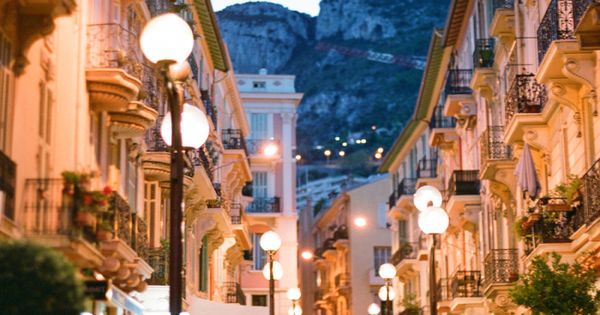 If you’re the kind of traveler who likes getting to know a place by the details, taking a walk weaving through the secret cafes and passages of this exquisite city is something you’d absolutely enjoy. Proceed leisurely, admiring the views of the old town, enjoying the winding streets, and looking over the stunning port with the passing boasts and moored yachts. Occasionally take a break and stop by a snack bar to get some refreshments. Then conclude your day by fine dining at one of the best restaurants at Le Rocher. 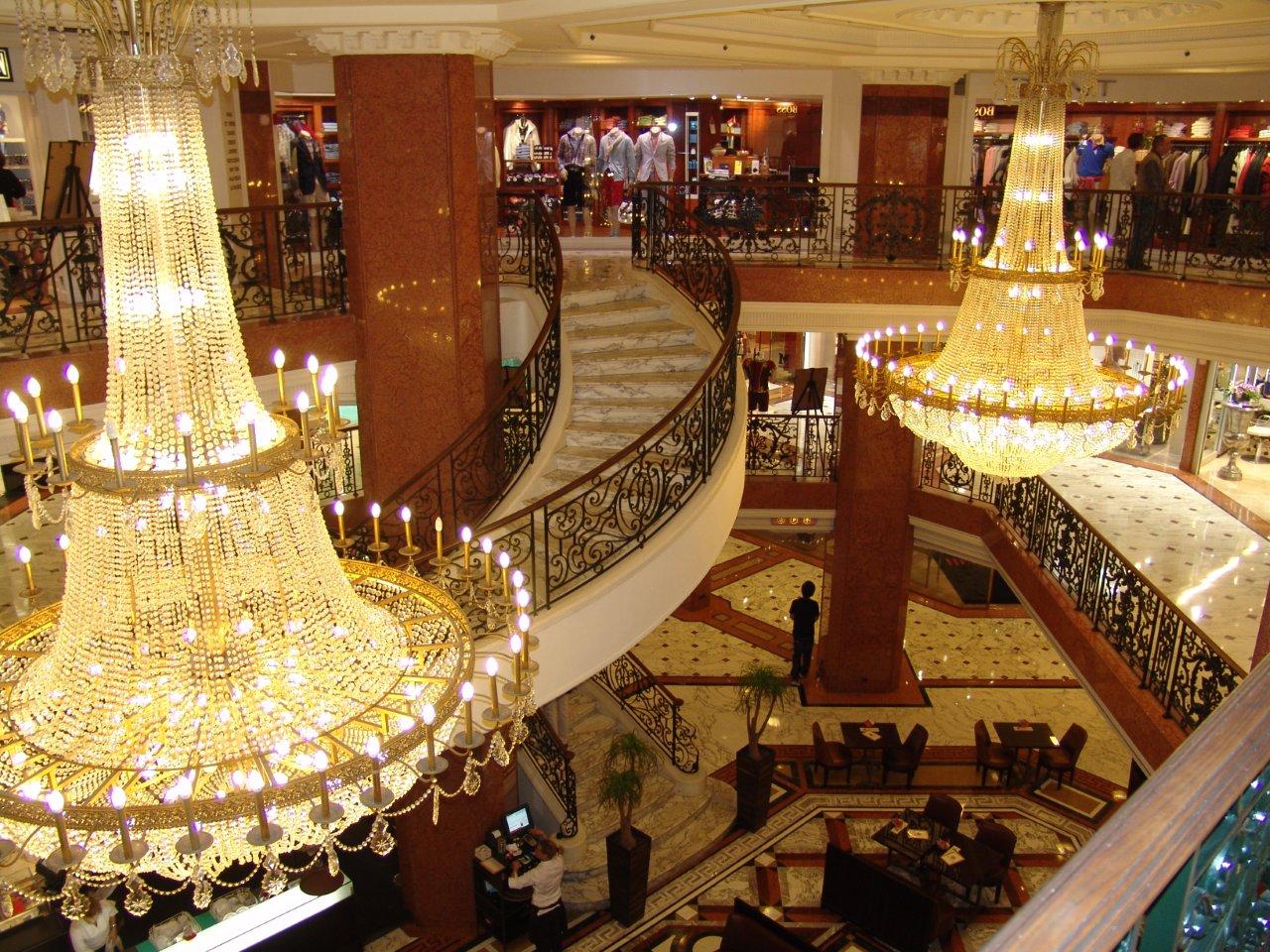 The peak embodiment of commercial ritz and luxury in the city, Le Metropole which is just right next door to the Metropole Hotel in Monte Carlo, promises premier shopping experience from some of the world’s most classy brands such as Tom Hilfiger and Hugo Boss.

The hotel-like space features a grand chandelier and winding staircases connecting the three levels. Coffee shops and high-end restaurants are also found in the mall.

If you want to take a break from the heat but don’t want to go to the beach, spending some mall time, window shopping merchandise or simply watching people pass by are your alternatives. You can easily see seats and benches around the mall.

Looking for Monaco rentals for your Monaco holidays? Find the best ones here. 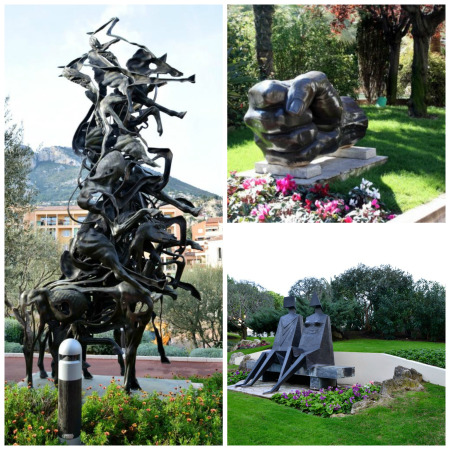 If you want some quirky travel challenge for yourself, this is definitely one to take. Monaco is dotted with almost a hundred statues, placed alongside pedestrians, fixed in parks, and around gardens. As part of a personal side quest, take effort to look out for these endearing statues whenever you go out. Document the experience, and perhaps even dare other travelers to top your score. 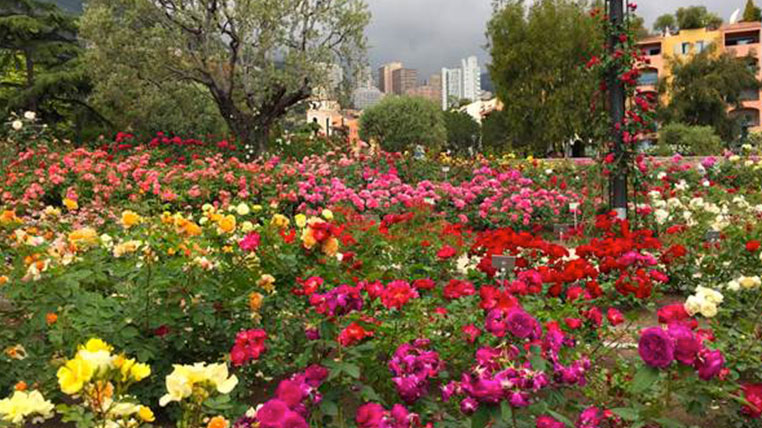 Located in Fontvieille, this lovely botanical garden features palms and olive trees among lengthy rose beds. Thousands of roses bloom and diffuse their scent to perfume the pleasant space. It’s best if you visit during the summer when the flowers are in full bloom.

The garden is named after Princess Grace of Monaco and aside from the amazing flora, also displays a magnificent view of the Mediterranean, creating an overall tranquil place that enables you to loosen up, take it slow, and have a good time.

A wonderful escape from the glitz and glamour of the city, the Princess Grace Rose Garden offers a calming setting for relaxed afternoons. 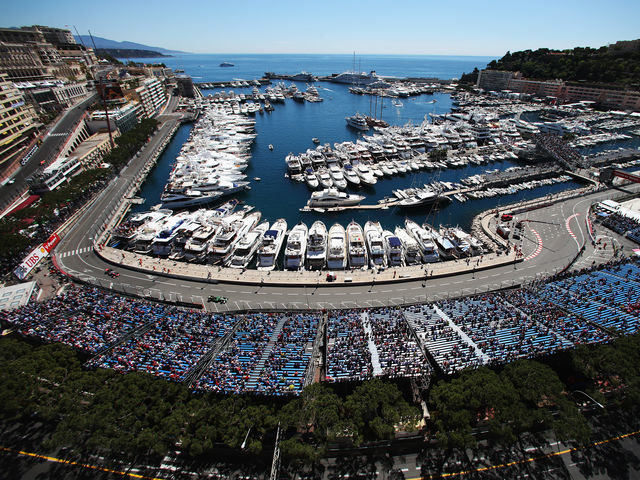 The Monaco Grand Prix is a Formula 1 Motor Race held annually on the infamous Circuit de Monaco. The yearly tradition has been around since 1929 and is globally supported by international brands and names involving high-end motor companies.

The Monaco Grand Prix starts in May. The event attracts tourists from all around the world and is widely covered by top media companies.

If you happen to visit during the event, expect tourist-filled streets, supercars in every corners, and a generous display of lux and wealth you can only find in Monaco.

To get the authentic Monaco experience, live like a local. Stay in one of All Luxury Apartments’ Monaco rentals that are exclusively identified and chosen among exceptional properties for rent in the country.

We offer vacation rentals for short term lease so you can feel right at home even when on holiday. All ALX apartments or condos for rent puts you in premier positions in high-end neighborhoods and close to the best spots in Monaco.