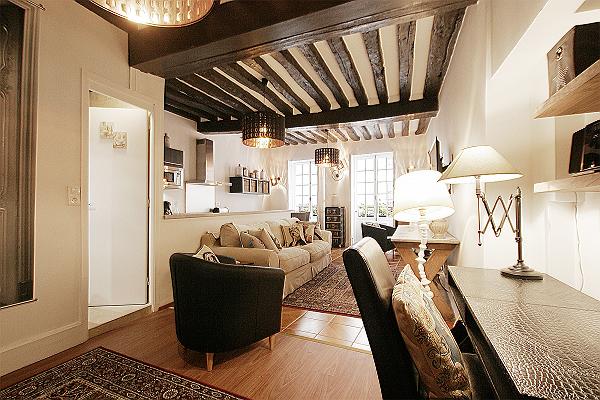 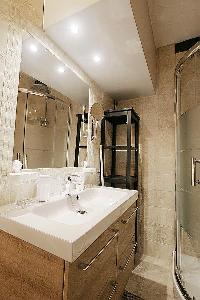 Located along rue Mouffetard is this luxury two-bedroom Paris apartment which is recently refurbished for your comfort. It is situated on the first French floor of a building that’s just a few steps away from the famous Pantheon, giving you access to the renowned Parisian attraction. The apartment itself has an area of 73 square meters that contains all the amenities that you would need for a luxury vacation in this beautiful city.

The Mouffetard - Monge II’s signature feature is its exposed antique wood beams that complement the cream and white decor throughout the apartment, giving the place a homey feel. Its living area is furnished with a large cream sofa, a table, a few chairs and a television to help you relax after a long day in the city.

Situated right behind the living area is the apartment’s well-equipped kitchen that is fully-equipped with a boiler, a coffee machine, a freezer, a fridge, a microwave, a toaster, a dishwasher, and an oven that allow you to prepare food at your own convenience. A washing machine, iron, ironing board, and clothes dryer are also placed in the apartment to aid you in your vacation chores.

With one bathroom and two bedrooms, the Mouffetard - Monge II is ideal for small families and groups of friends as it can accommodate up to four people. Both bedrooms are similarly decorated as the living area as they also have antique wood beams and modern furniture. The first bedroom is furnished with a double bed, a nightstand, and a bedside table with lamp.The second bedroom is similarly furnished as it also has a bedside table with lamp, a double bed, in addition to a wardrobe and some mirrors.

The apartment’s sole bathroom, on the other hand, is fully-equipped with a toilet, a sink, a bathroom cabinet, a towel rack, and a shower enclosure for your convenience.

The district in which the apartment lies has a long cultural history as it is home to famous cafes where philosophers, writers, artists, and musicians debated, discussed, and brought their ideas and inspiration to life. It is located on the left bank of the Seine River, the area is known as the Latin quarter of the city in which numerous Parisian monuments, museums, and gardens are placed. The Institut du Monde Arabe, the Musée de Cluny, and the Muséum National d'Histoire Naturelle in the Jardin des Plante are situated within the area making it one of the prime locations for apartment rentals in the city.

Make sure that you check out the Luxembourg Garden in which the famous meeting point, the Fountain of Saint Michel, is located. There are also numerous luxury boutiques within the area, some of which include Louis Vuitton and Yves Saint Laurent, for your retail therapy sessions.

Excellent restaurants, such as La Crete, Le Comptoir des Arts, Chez Ann, and Le Vieux Bistrot, are located nearby, along with bars and pubs, such as Brewberry Bar a Bieres, Connolly’s Corner, Little Bastards, and Le Bar de Fer. Cheap eats, some of which include Chez Nicos, Bocamexa, La Grotte de Chypre, and Au P’tit Grec, can be easily accessed so you need not worry about your meals and entertainment during your stay.

Within the vicinity is the Place Monge metro station that gives you a hassle-free access to other attractions within the city during your short-term or long-term stay at the Mouffetard - Monge II.