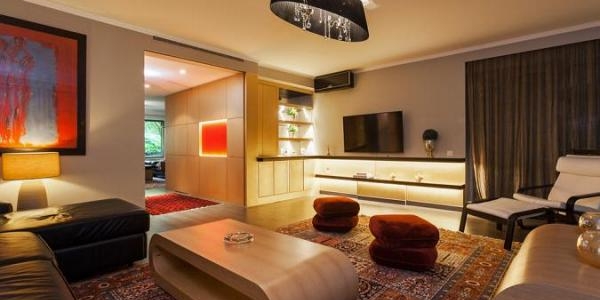 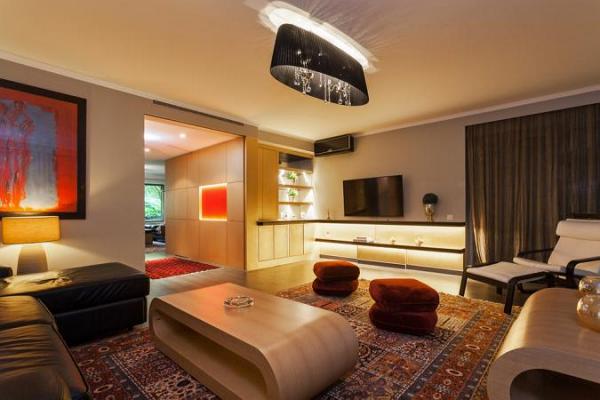 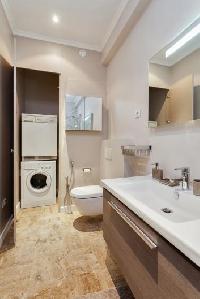 Located along Avenue Foch is this beautiful luxury Paris mansion that has minimalist interiors yet managed to be elegant and chic at the same time. The Champs Elysees - Foch mansion boasts 285 square meters of living space in which all the amenities that you would need for a hassle-free vacation are placed. It is situated within the area of Avenue des Champs-Elysées, which is one of the most famous avenues in the world, and it is lined with fashion houses, art galleries, theaters, cafes, and cinemas, giving you access to numerous establishments during your stay.

The Champ Elysees - Foch Mansion has three living areas, one of which is furnished with a television, a king-size sofa bed, and two armchairs in which you can relax on after a long day in the city. The second one is equipped with an L-shaped sofa, floor chairs, and an armchair, giving you more relaxation spots during your stay. The third living area, on the other hand, is situated near the kitchen. It has an armchair, two sofas, and a media shelf on the side with a television on it. A high-speed WiFi connection is also available to keep you entertained throughout your stay in this luxury apartment.

Right across the third living area is a well-designed kitchen that is equipped with a coffee machine, a fridge, a dishwasher, and a combo microwave oven that allows you to prepare food at your own convenience. These freshly home cooked meals can be enjoyed in the kitchen counter situated just a step away from the third living area, or in the dining area located on the first French floor of the apartment.

With four bedrooms and five baths, the Champs Elysees - Foch Mansion is ideal for families and groups of friends as it can accommodate up to six people. At the zero level is a large reception which can be, if needed, turned into a bedroom by closing the sliding door. We will be providing you with a queen-size air bed if needed. At the same level is a bathroom with a shower and toilet for your convenience.

The master bedroom, on the other hand, is situated in the first French level. It is fully-equipped with a television, a king-size bed with bedside tables and lamps, and an en-suite bathroom that fully-furnished with a sink, toilet, and shower area. Another bathroom is placed on the level, and it is similarly equipped as the other bathrooms.

The last two bedrooms are situated in the second French level, and one of which has a double bed, a chest of drawers, bedside tables, and an en-suite bathroom that is fully-equipped with double sinks, a toilet, and a bathtub. A combo washer and dryer are also placed here to aid you in your vacation chores. The last bedroom, on the other hand, is furnished with a king-size bed, a television, a large wardrobe, and an en-suite bathroom that is complete with a sink, toilet, and shower are to provide you with more bathing facilities during your stay at the Champs Elysees - Foch Mansion.

Excellent restaurants, such as O’Bourpif, Le Petit Pergolese, Al Piccolo, and Auberge Dab, are located nearby, along with bars and pubs, such as The Honest Lawyer, Le Bar Bibliotheque, L’Ambre Bar, and La Maison. Cheap eats, some of which include Cafe Contre Allee, Il Maestro, Olive & Balsamic, and McDonald’s, can be easily accessed so you need not worry about your meals and entertainment during your stay.

Within the vicinity are the Victor Hugo, Porte Dauphine, Etoile, and Argentine metro stations that give you a hassle-free access to other attractions within the city during your short-term or long-term stay at the Champs Elysees - Foch Mansion.