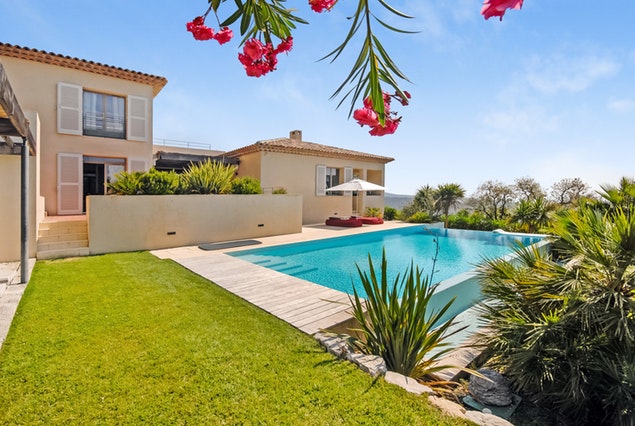 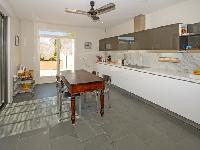 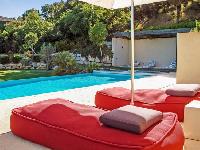 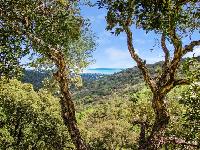 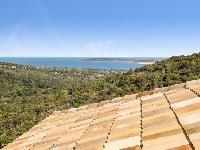 Set against a verdant backdrop of forested hills, this luxury villa rental near Grimaud commands far reaching views across the Gulf of Saint Tropez and is in close proximity to the French Riviera and its glamorous lifestyle. It is nestled in an exclusive residential neighborhood with typical Mediterranean setting of Southern France.

This luxury villa is set over 3 floors, has 4 bedrooms, 4 bathrooms and a maximum capacity of 8 guests.

You access the villa via the GROUND FLOOR. It has an entrance hall and a lift to take you to the other floors.

On the FIRST FLOOR, you’ll find a large open plan living and dining room equipped with all modern amenities with a classical flavor. You’ll find a huge Flat Screen TV, an open fireplace, piano, lovely sofa set and patio doors leading to the main terrace. You’d also find a cloakroom and a WC for added convenience.

The modern fully-equipped kitchen with breakfast room can also be found on this level along with two double bedrooms. One bedroom is equipped with a double bed, lovely en suite bathroom, WC and features huge French doors leading to the terrace. The other bedroom has two single beds, also with an en suite bathroom, French doors to the terrace and a walk-in shower and WC.

Up on the SECOND FLOOR, you have the two other bedrooms, one of which is the Master bedroom fitted with a king-size bed, dressing room, en suite bathroom and a walk-in shower and WC. The other bedroom has two single beds, en suite bathroom, walk-in shower and WC as well. Both rooms offers a spectacular view of the outdoors, the landscaped gardens and the gulf and mountain ranges of Saint Tropez.

OUTDOORS, you have the beautiful landscaped gardens with mature trees and shrubs and ample lawn areas. There’s a covered terrace which could be utilized for al fresco dining. You also have an electric barbecue grill at your disposal. Few steps from the 11m x 6m heated, oxygen-filtered pool, you’ll find a pergola that offers a relaxing and fresh atmosphere along with amazing views. The villa also has a Boules pitch for recreation purposes as well as a ping pong table which could also be used outdoors.

For those coming in with cars, the villa has a spacious onsite parking for 4 cars. Please note that the drive to the villa is quite steep.

For added personal convenience, the entire villa has WIFI Internet access and a telephone which you could use for local calls.

Should you want to explore the neighborhood, a quick drive to Saint Tropez and you’ll find a wide selection of trendy cafes, boutiques and restaurants as well as a large Saturday market. Fun and adventure-filled activities are also available in the area. Practice sailing, wind surfing, water skiing, horse riding, hiking and go-karting are some of the popular activities in the area. There are also beaches at Port Grimaud, near its lovely marina, and the long sandy beach at Pampelonne is still within a short drive of this luxury holiday villa and well worth a visit.

Grimaud is a village and commune in the Var department in the Provence-Alpes-Côte d'Azur region in southeastern France.

It is located on the French Riviera. The village of Grimaud is a perched village, with historical links to the Grimaldi family. Gibelin de Grimaldi aided William the Good drive the Saracens of Fraxinet out of the area in AD 973 and was rewarded with the land. The village is dominated by its 11th-century castle (partially restored).

The Gulf of Saint Tropez was known as the Gulf of Grimaud until the end of the 19th century. The seaside town of Port Grimaud lies within the commune, at the head of the gulf.

Grimaud is one of the gateways to the Massif des Maures. As you climb towards the village from the sea, you soon reach the foothills of this imposing mountain range that extends along the entire southern part of the Var region, from Hyères to Vidauban, from the Maures plain to the sea. Oak and chestnut trees carpet the slopes of the rolling hills, dominated by the site of Notre-Dame-des-Anges, the highest point in the Maures massif, above Collobrières. Grimaud is like a crown jewel nestled against the unspoiled, well-preserved setting of the Maures mountains. A magnificent forest.