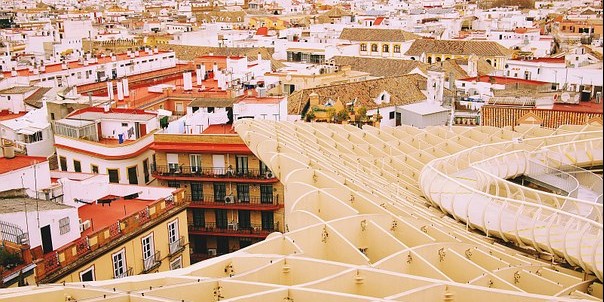 
Seville is the capital and the largest metropolitan city of Andalusia. It is home to many landmarks including recognized UNESCO World Heritage Sites such as the Alcázar, the Cathedral, and the Archivo General de Indias. It also boasts numerous museums, botanical gardens and monumental parks. With lots of attraction and the year round pleasant climate, Seville has become a major tourists center in Spain.

One of the Unesco World Heritage Sites is the Seville Cathedral. It is the largest cathedral in the world with 80 chapels. It was built to signify Seville's wealth when it became the major trading center in its Golden Age. This magnificent cathedral was completed in 1507 after over a 100 years of construction. The craftsmanship is truly exceptional and evident on its Gothic style structures. The cathedral stood on what was once a great mosque and part of its minaret remains and now serves as the cathedral's Giralda bell tower, one of the spectacular architectures and attractions of this enormous complex.

Another one listed in UNESCO World Heritage Sites, Real Alcázar is a royal palace built by the Castilian Christians. It is located near the Seville Cathedral, in the heart of the city. The palace went through a 500 years of construction, changing the architectural style from time to time and in the 13th century, it was remodeled using Gothic and Romanesque elements. Later on they have added Renaissance style and more of Islamic decors and ornaments. The palace has been damaged by an earthquake in 1755, they have renovated the façade of the Palacio Gótico in Baroque style. All of these architectural style combinations create a magnificent and unique features of Real Alcazar. Aside the palace, you may explore the terraced gardens filled with oranges, roses and leafy palm trees. This beautifully landscaped gardens has a refreshing fountains and pavilions, a perfect spot for relaxing because of its tranquil ambiance.

Seville is famous for its flamenco, a varieties of Spanish musical and dancing styles. The Museo del Baile Flamenco is an interactive museum dedicated on educating visitors about the history and art of flamenco with its themed floors and screen presentations. The museum is open daily from 10am to 7pm followed by a flamenco performance show that will lasts for an hour.