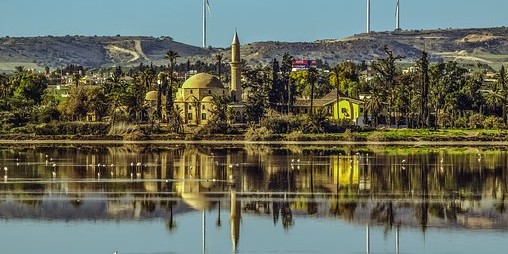 
Larnaca is located in the southern coast of Cyprus and it is the largest city in the country. This city is famous for its palm-tree seafront, it is also called Foinikoudes which is the Greek word for palm trees. Promenade of Foinikoudes is a 600 meters long stretch of golden sandy beaches with the combination of entertainment facilities and cultural landmarks. This place is an ideal destination for families due to its proximity to restaurants, bars and various accommodations.

Lanarca houses many churches and one of the most beautiful is the church of Saint Lazarus. It is built on the tomb of Saint Lazarus in the late 9th to early 10th centuries that gives it a religious and archaeological value. The interior structure is divided into three aisles with large double pillars and an arched openings going through them. Stonework is made of a meter-thick limestone block. Unique Baroque woodcarving can be observed on the wall of icons and religious paintings inside the church.

Located in the southern slopes of the Troödos Mountains is the village of Lefkara, which is famous for lace production and silver handicrafts. Groups of women sitting in the narrow village streets creating unique embroidery is a common sight. Cobbled limestone streets and preserved mansion architectures are main features of this village. There is also a local museum showcasing the life in Cyprus from hundred years ago. It exhibits exquisite embroidery samples, some date back to the 19th century.

Considered as one of the most important wetlands of Cyprus is the Salt Lake located in the west of Larnaca. This lake also serves as a passage for migrating water-birds of different species and with estimated populations between 20,000–38,000. The lake is rich in nutrients and during the winter months migrating birds are stopping by and feed on brine shrimp. Pink Flamingos are a common sight and birdwatchers visit during winter months to observe these migrating birds gather and play in the center of the lake.