Which Michelin star restaurants to visit on the French Riviera

With a reputation as a glitzy playground for the rich and famous it’s no surprise that the French Riviera boasts a myriad of fine dining options. From traditional French cooking to molecular techniques, you’ll find it all on the French Riviera. As well as Michelin star kitchens you’ll also find some of the best beach restaurants in Europe and plenty of festivals and exhibitions to keep you busy. But if you’re a self-confessed foodie then it’s this list you need… don’t plan your holiday without this definitive guide to the best Michelin star restaurants in the region.

Elsa is the first all-organic restaurant to earn a Michelin star and you can taste it in the flavours and quality of every ingredient. The locally-sourced ingredients come from the mountains of Provence and the sea of the Mediterranean and the restaurant even has its own vegetable garden in the hills above the eatery. It’s perched at the end of Monte Carlo Bay, making it the perfect detox from the unabashed decadence of Monaco. 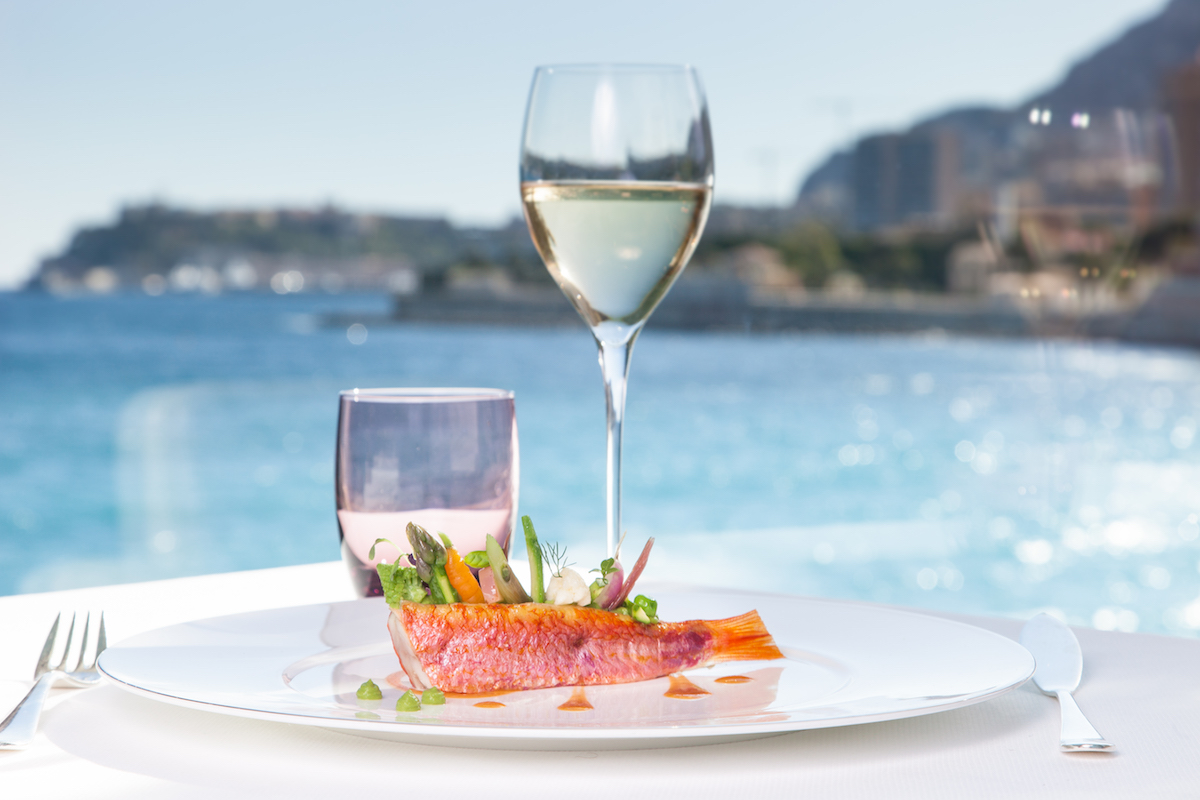 After strolling along La Croisette, satiate your appetite with a stop at La Villa Archange. As the name suggests, this magnificent restaurant is set in a mansion that oozes old-world charm. The restaurant has earned two Michelin stars a menu that focuses on French country classics like veal knuckle and fois gras. And in our opinion, you can never go wrong with the classics. 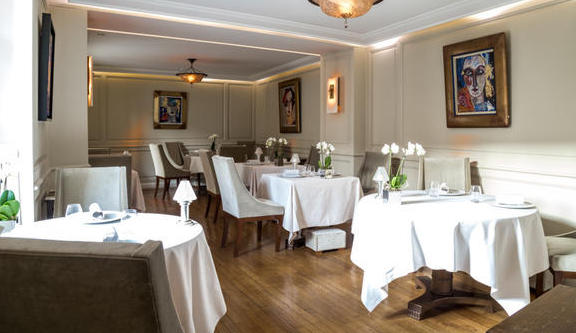 We’re obsessed with the extravagant setting of Le Chantecler at Le Negresco which is all dark wood panelling and grand oil paintings. If you can tear your eyes away from the excess of your surroundings then you’ll discover the menu is pretty special too. Virginie Basselot from Normandy serves up dishes like tartan of sea bass and lemon cream and caviar to her glamorous jet-set guests. 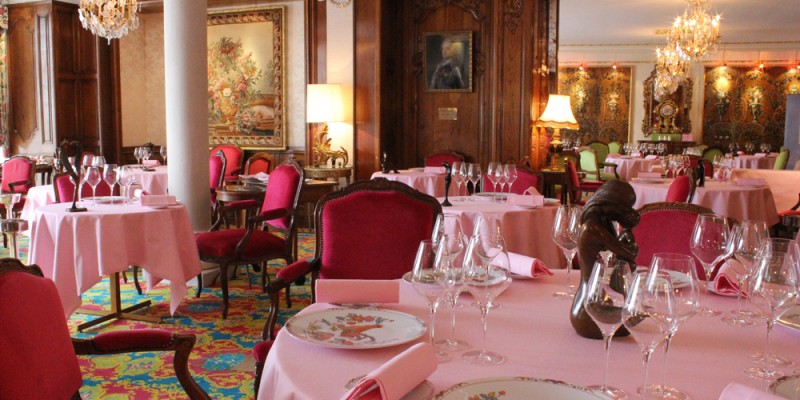 When a restaurant boasts three Michelin stars you can pretty much guarantee that you’re going to be in for an exceptional dining experience. La Vague d’Or does not disappoint. Arnaud Donckele, the head chef from Normandy uses rare ingredients that are unique to the area to create an exciting menu full of tributes to the Mediterranean. The food is 100% local, using only ingredients from the region and you can choose between a set menu and an a la carte option. The setting isn’t bad either, situated right on Plage De La Bouillabaisse. 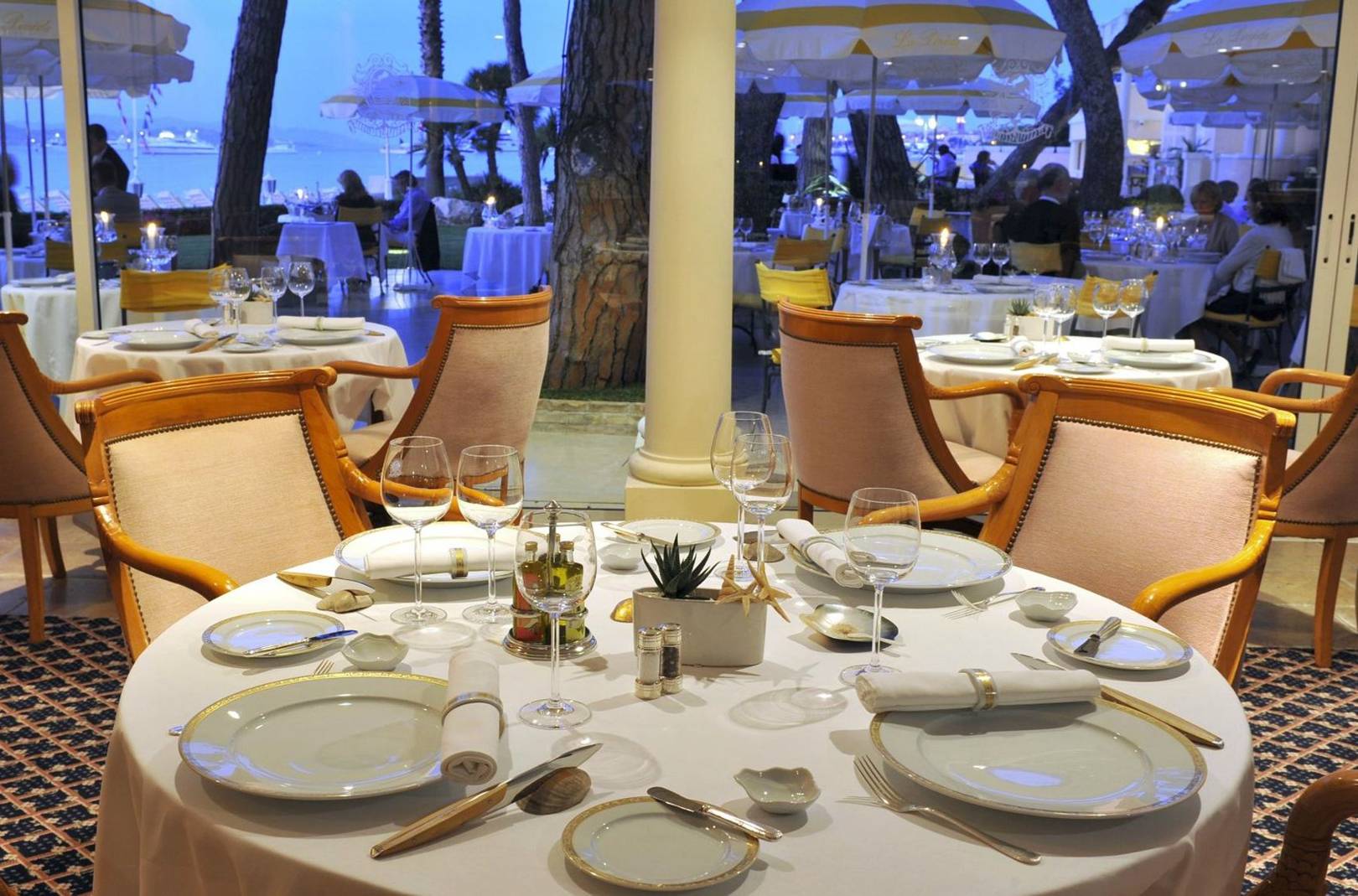 Named after Cannes Film Festival’s highest award, it’s no surprise that this is a favourite for movie stars like Leonardo DiCaprio and George Clooney. In fact, the restaurant is so entwined with the film festival, that every year Chef Christian Sinicropi hosts the exclusive Dinner of the Jury where he crafts a film-themed menu and serves it on handmade dishes inspired by movie scenes. People watching is pretty good here all year round so grab a table for a better turn out of VIPs than any red carpet. 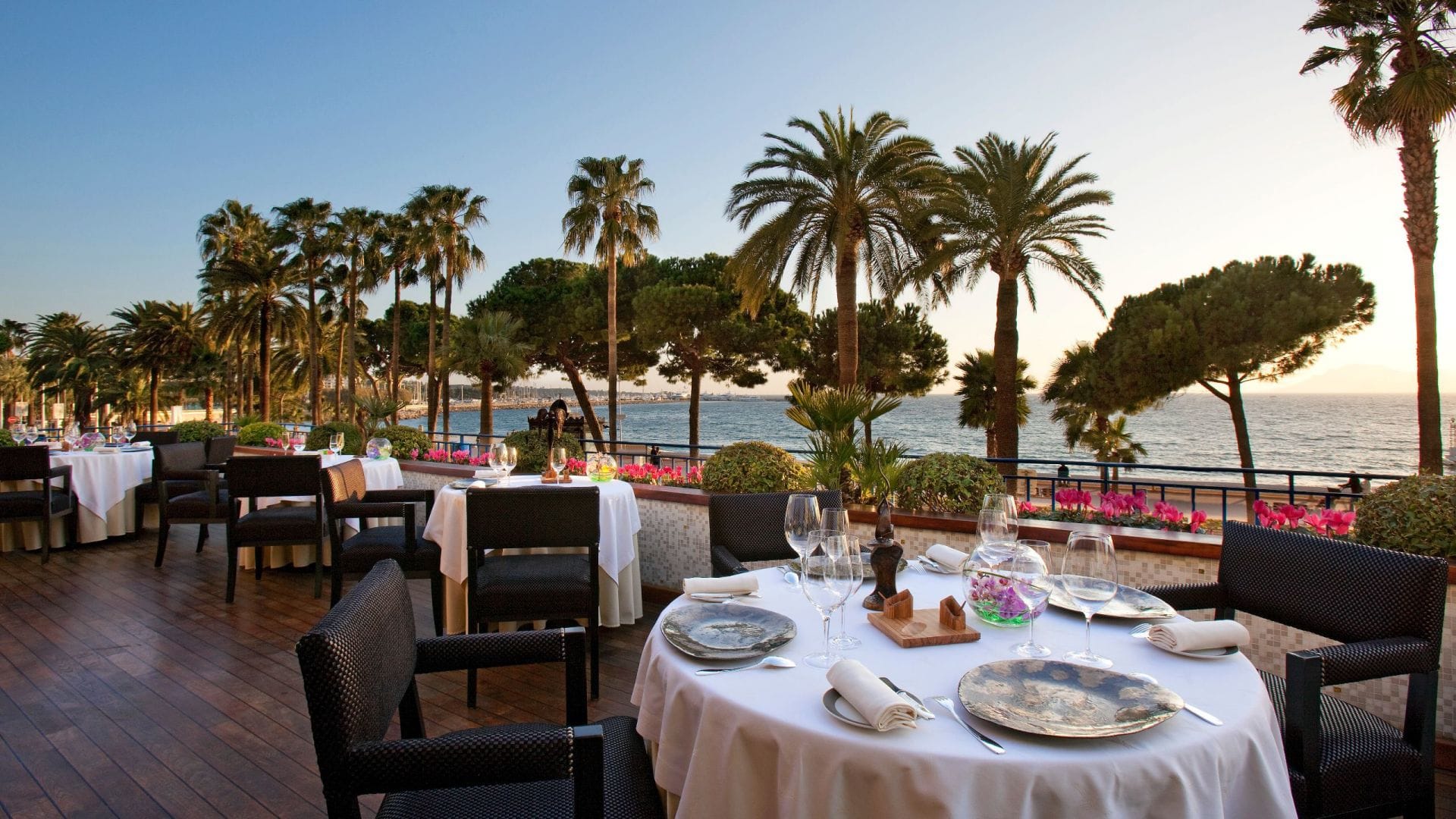 Don’t even think about booking a table here if you’re watching what you eat. This is no place for dieters. Hotel Metropole’s two-star signature restaurant, Joël Robuchon Monte-Carlo’s menu is a riot of dairy, carbs and sugar with dessert trollies rolling around that will be hard to resist. From the chef’s table, you can watch the masters at work in the open Teppanyaki-style kitchen which is an experience in itself. Finish off the evening in the iconic Metropole Bar where you’ll be rubbing shoulders with some of the French Riviera’s most stylish visitors. 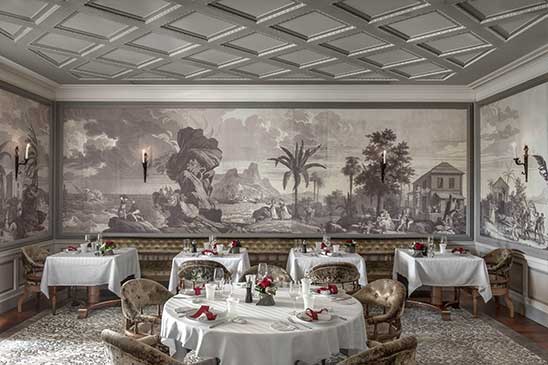 Trendier and more contemporary than the other restaurants on the list, Jan is where the young and hip can be found in Nice. Based in the fashionable district of Nice Port, chef Jan Hendrik van der Westhuizen, a South African native, rustles up dishes from his home country using Mediterranean ingredients. There are only 24 seats in the compact dining room so we recommend calling a few weeks in advance to book. 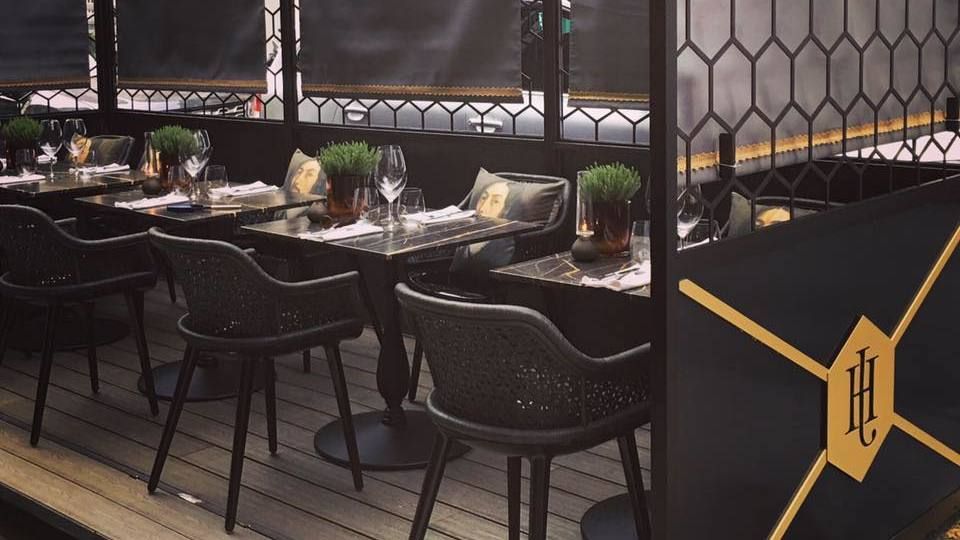 The stunning village of Eze is home to two Michelin star restaurants – the single-starred Château Eza and double-starred La Chèvre d’Or. La Chèvre d’Ormhas has boasted Michelin status for over 40 years and in the year 2000 was given its coveted second star. You can sit and watch the yachts of the super rich cruise by below as they make their way into the Cannes marina, making this worth a visit for the views alone. You’ll find dishes from the land and sea with ingredients sourced from the nearby mountains as well as the Mediterranean. The opening times vary depending on the season so be sure to call ahead and book a table. 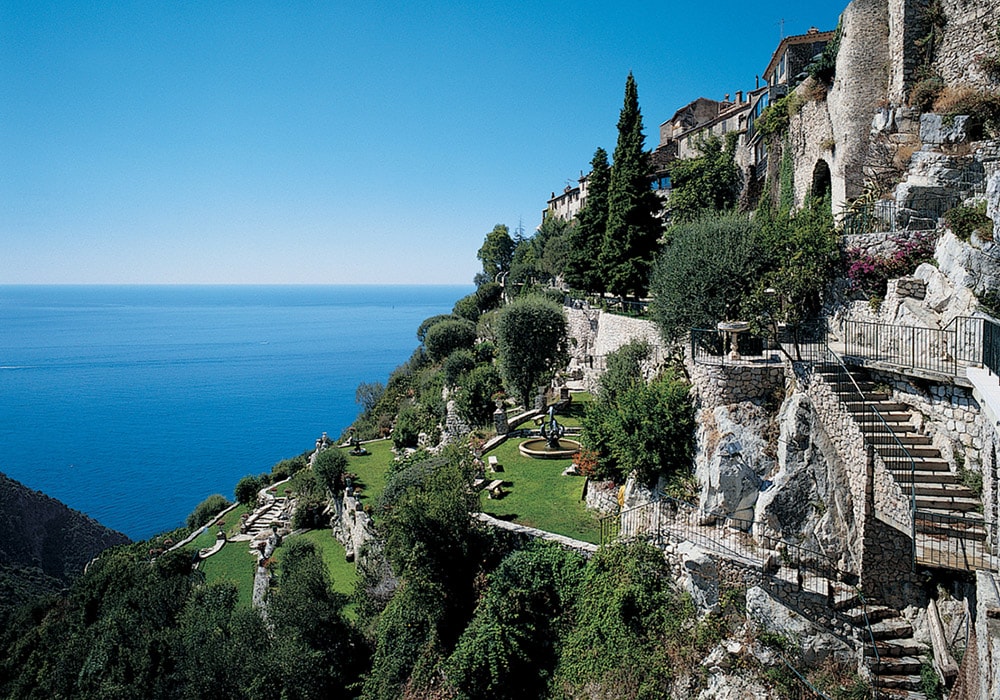 Nestled in the small village of Juan les Pins with breathtaking views of the Cote d’Azur, Les Pêcheurs is a popular choice for locals and tourists alike. The one Michelin star restaurant balances innovation with classic Mediterranean flavours for intriguing and exotic results. 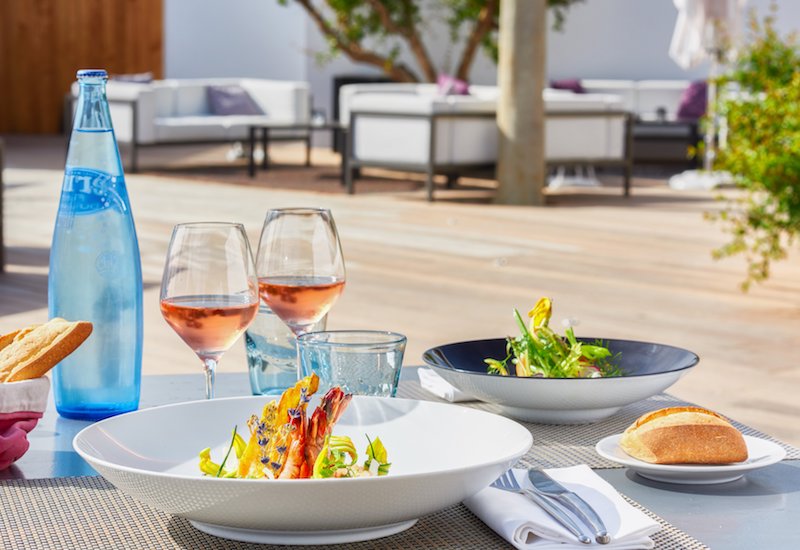 Le Louis XV – Alain Ducasse is an institution on the French Riviera, first opening in May 1987 in the Hôtel de Paris Monte-Carlo. It now has a reputation among foodies as one of the world’s most opulent eateries with marble, gold leaf and baroque furnishings everywhere you look. The menu focuses on outstanding local produce with dishes such as blue lobster and black truffles while the wine cellar houses over 4,000 wines. So make sure you come thirsty.