Things to Do in Crete in Summer

Crete is a gorgeous island with a multicultural identity. It prides itself in its beautiful terrain studded with magnificent beaches, tall, steep, and rugged rock formations which sometimes frame the dreamy villages, and the ruins that depict the long history of its people. Today, Crete is never less beautiful and there are plenty of things to discover for those who are prepared for an adventure. What are the best things to do in Crete in summer? Here's our top list.

Each constituent island of Greece has its own identity and Crete isn't an exception. The largest of the Greek islands, Crete was once the heralded center of the Minoan civilization, the earliest known civilization to bloom in Europe. Its natural landscape is abudant, with mountain ranges and gorges in its natural trails.

In summer, the temperature is hot but not sweltering hot, although you still have to bring your sunscreens, eye gear, and hydration. The tourist season usually runs from April to the middle of October.

The food is heaven-sent, the water is A-mazing, and the people, most of all, are fine generous folks. Our list is a recommendation, although you never have to hesitate asking a local for counsel. 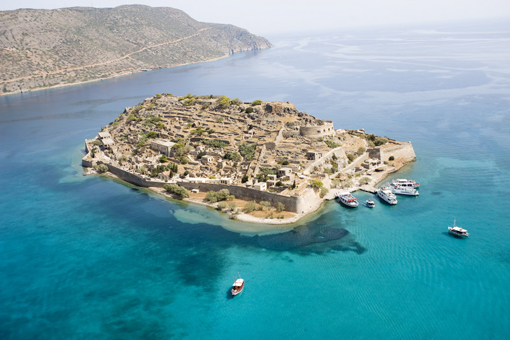 Located on the Gulf of Elounda, the island of Spinalonga - called officially as Kalydon, has a long interesting history. It was called Leper Island back when lepers from the island and the rest of the country were quarantined here until 1957. It also has Venetian stories embedded in its ruins. Many tourists come here to gawk at the historic sites and the archaeological findings.

To get to Spinalonga, you need to take a boat from Agios Nikolaos, Elounda, or Plaka:

l From Agios Nikolaos, the boat departs in the morning. Lunch is offered along with an opportunity to take a quick dip in the sea.

l In summer, there is a boat from Elounda harbour which departs every 30 minutes. The trip will take around 20 minutes.

l If you're coming from Plaka, the trip is shorter (around 7 minutes) as Plaka is just opposite Spinalonga. 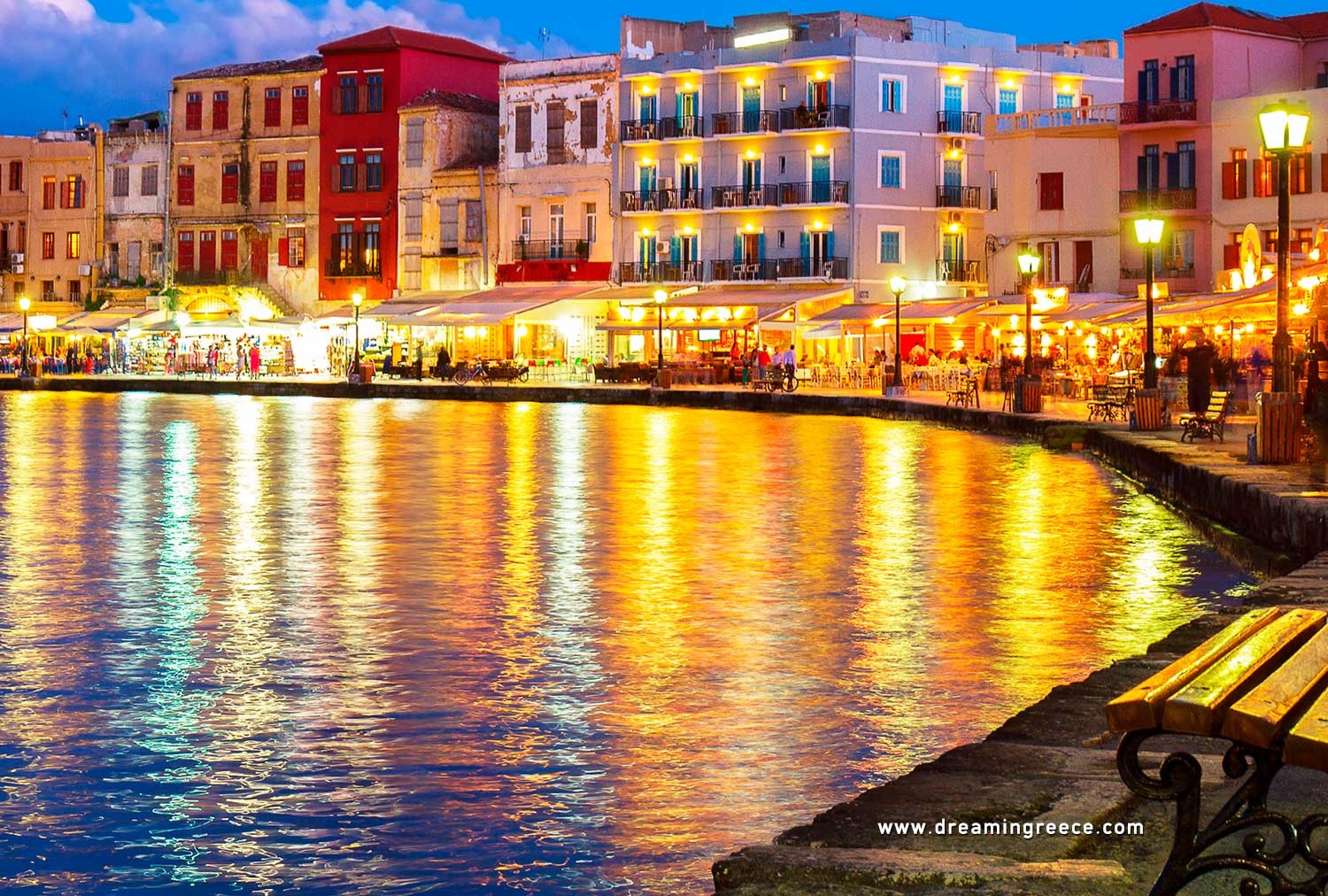 Chania is Crete’s second largest city. Characterized by its old narrow alleyways, it is a city that harbors many secrets, many of which you have to explore on foot. There are plenty of places to see so you have to organize your time well.

The best place to start your Chania escapade is the old town with its abundance of local shops, restaurants, cafes, and of course, its historic monuments and attractions. Never miss the 14th century Venetian harbor that instantly sweeps you back in time, the 16th-century Venetian lighthouse, and the Municipal Market which brings in the best fresh produce in the island.

If you’re staying for more than a day or two, you should explore the beaches of Falassarna and Elafonisi with its pink sand, the Lake of Kournas and the surrounding villages, and of course, Crete’s rich archaeological museums.

3. See where Zeus was born

Perhaps you’re vaguely familiar with the mythological figure of Zeus, the Olympian god of the sky and basically the ruler of the gods in Greek mythology. A very imposing figure according to the ancient myth, he is typically depicted with a bolt of lightning in his hand. He was also said to have been born in Crete in the Dikteon Cave. If you’re curious enough of its whereabouts, head to the Lasithi Plateau on the eastern side of the island. Today, the plateau has turned into a magnificent patch of pear and apple orchards and is home to more than 7000 windmills. The Dikteon Cave, also known as Dikteon Andron or Dictaean Cave, is located in the Mount Dicte range and is rich in stalactites and stalagmites.

You can get to the (mouth of the) cave by riding a green bus (KTEL) to Lassithi Plateau once a day in summer and twice a week in winter. The bus is located on the bus station near the Heraklion port and costs 7 euros. You can also get there by car. Drive to the plateau and look for signs to the Psychro village. There's also a bus tour with a professional guide. Pick up and return trip is covered. Choose from the following options:

l Monastery of Kera, Lassithi Plateau and the Dikteon Cave 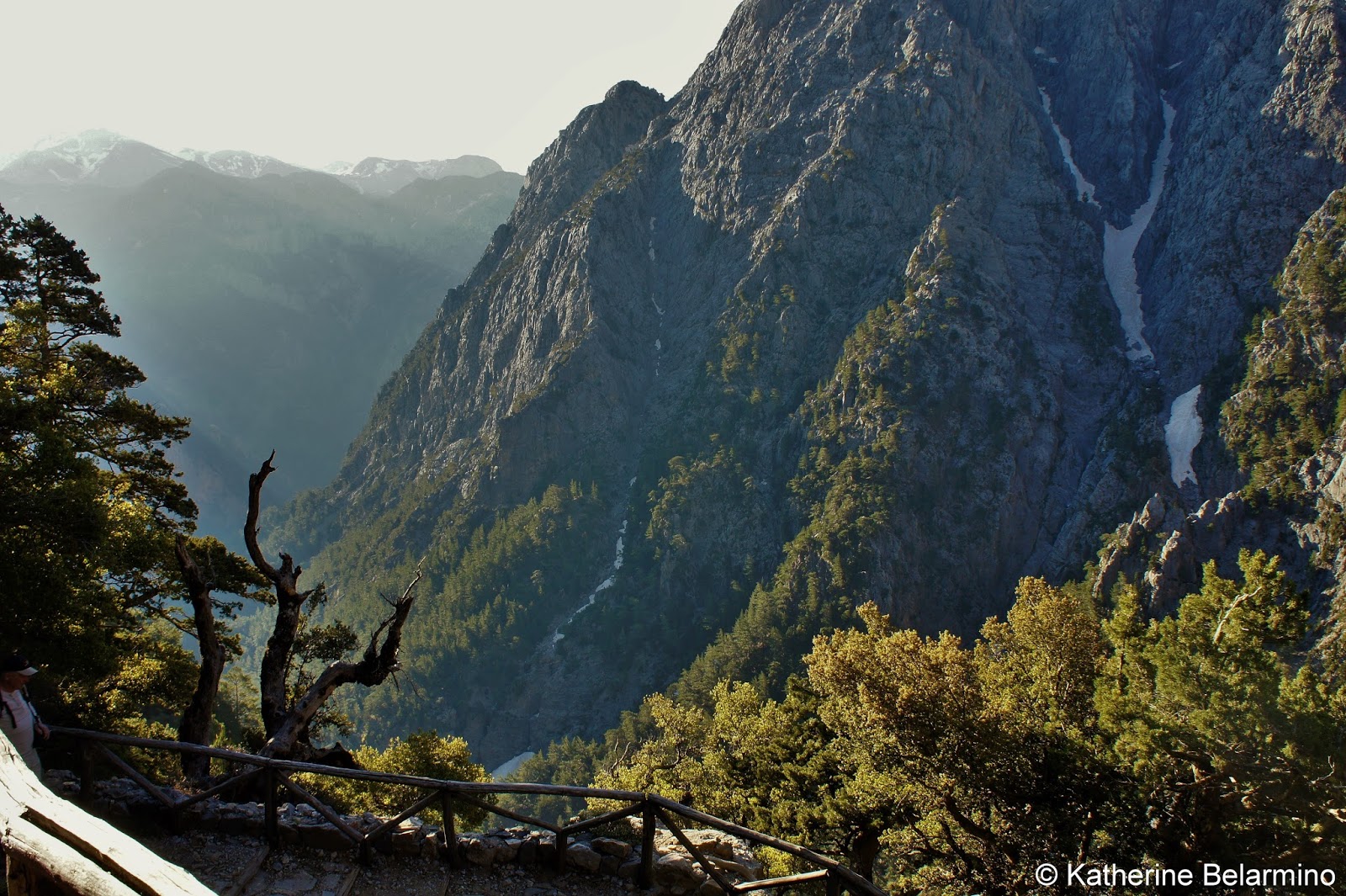 If hiking, camping, and communing with nature is something you’d like to experience in Crete, you’re in for a treat. Crete has the longest park trail in Europe: the Samaria Gorge, is an 18-km trip deep into Crete’s beautiful landscapes and scenic routes.

The Samaria Gorge is located in Samaria National park, within the White Mountains in West Crete. Here, some 450 species of flora and fauna thrive.

The Gorge opens from May 1 to October 15, contingent to the weather.

You can choose to visit the Gorge on a tour or just take a public bus from Chania (to Omalos). 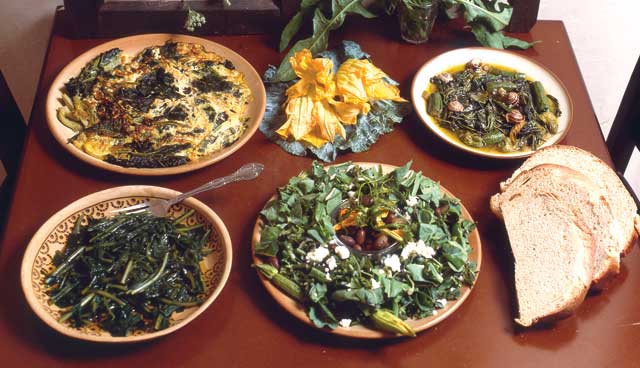 Gastronomy is one of the best offers of the island. Its cuisine is as rich as its beaches. For Cretan–Mediterranean cuisine, head to Pigadi at Xanthoudídou 31, Old Town, Réthymno. Methexis, in the far south end of the east-facing shore boulevard, Paleóhora offers unusual dishes like goat with askólymbri. A Hungarian-Cretan combo deli, Bakaliko in the main plaza of Arhánes village has a wide menu that includes breakfast, hot drinks, smoothies, and pita wraps. You will enjoy the sauteed manoúri cheese and chicken apáki as well as the aromatic rice with lamb bits.

Ta Dyo Ro is found in Panou Koronéou 28, Réthymno is a delightful surprise with its chicory greens, artichokes with broad beans, stuffed vine leaves, cuttlefish, and more. The Agistri in Angathiás village centre, near Palékastro is also worth a visit which cooks the freshest and cheapest fish in the region. 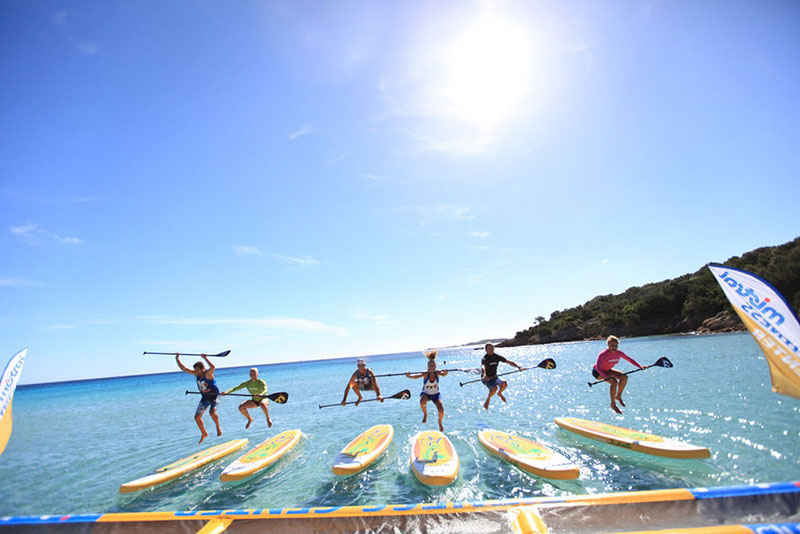 Just like the rest of the Greek islands, Crete offers a variety of outdoor watersports activities Everything from wind surfing to kayaking, snorkelling, trick skiing, knee boarding, and more! You can also charter a boat and be the boss of your own sea escape. Hop by beaches and take a break for a quick dip. Or equip your gear and explore the underwater beauty of the Aegean. The possibilities are endless. 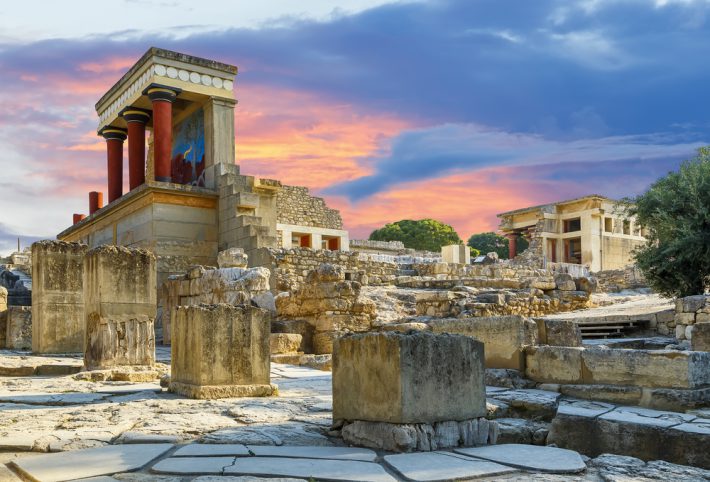 Located in Heraklion, this ancient place is the largest Bronze Age archaeological site in Crete and is considered the oldest city in the entirety of Europe. The ruins date back as early as the Neolithic Period, about 1900 BC. The beautiful red columns and wall paintings will tickle your imagination and give you insight about the long history of the whole of Greece.

Located some 20 to 25 minutes from Heraklion, the Minoan ruins is accessible by bus. If you want to fully understand the history, it is well-recommended to go on a guided tour.

8. Marvel at the Beauty of Balos 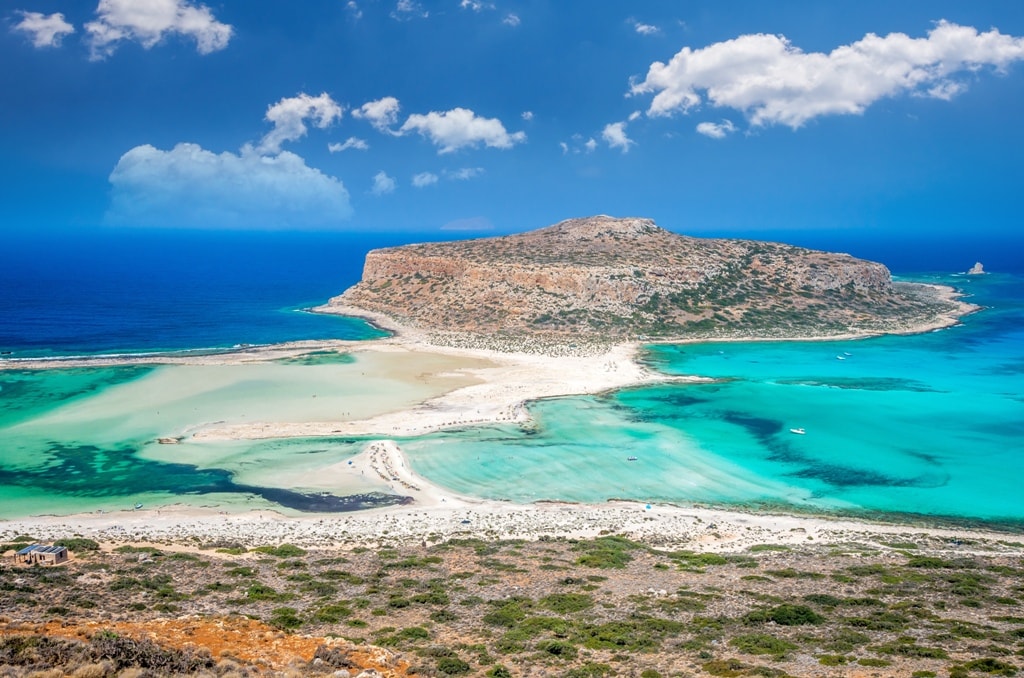 Located approximately 56km northwest of Chania, the spectacular beach of the Balos Lagoon is one of the most scenic meeting of sand and sea in Crete and in all of Greece. Fine white sand lace the coast and the crystal waters are so clear you can see the sea life in motion underneath. Because it is wildly popular among locals and tourists, it is highly recommended that you visit early in the morning to avoid the crowd. Visiting during the months of July and August can be pretty tough with all the beach goers.

There are three ways to get to Balos Beach:

a) If you are one of the more adventurous types, you can get to Balos by trekking from Kaliviani, all the way to the rough and dry landscape of Gramvousa and the range of Platyskinos. Along the way, there are curious stops such as the small chapel of Saint George in Tigani. The whole trip will take you three hours but we’re pretty sure the beautiful scene of the Balos will make the effort all worth it.

b) The second way is to take the ferry which fares in the morning from Kissamos. The trip will be scenic and there’s a fair chance of dolphin sighting which, by the way, is quiet an experience. The boat fare would cost you around 25 to 30 euros.

c) The third way to get access to Balos is to drive the dirt road by motorbike or by car from Kaliviani, passing along Cape Gramvousa. You will have to pay a small environment protection fee near Kaliviani. A bit more driving and you will find a wide parking area next to a canteen where the Balos beach is just within view. From here, another 1km walk to the beach. 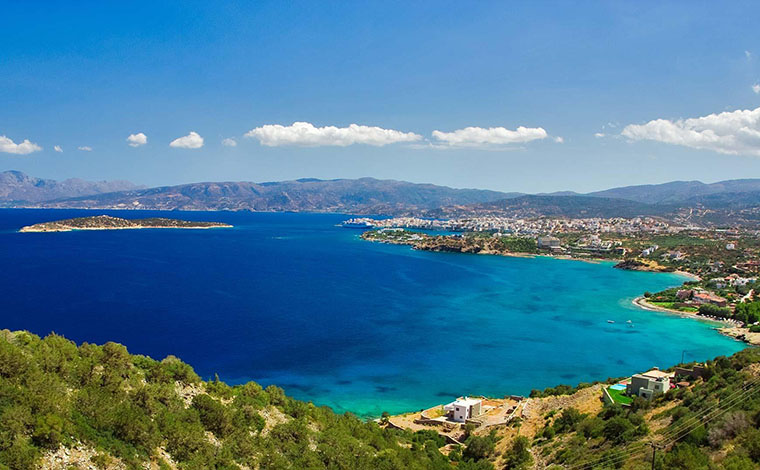 The Mirabello Bay is found on the eastern part of the island and is the largest bay of the Greek islands. The stunning blue waters are so clear and pure that you can see the bottom of the sea - easily postcard-perfect. Majestic beaches and harbors make for a spectacular view that is hard to forget. You can walk through the Marina and exit onto the road behind the yacht club, then turn right and enjoy a walk around the bay.

Around, there are plenty of restaurants and cafes for great lunches and dinners.

Chilled by the pool with a glass of cocktail in hand, while the breathtaking Cretan landscape unfolds in front of you is one way to simply enjoy your Cretan holiday. Stay in a place that is exclusive, private, comfortable, and luxurious - like this two-bedroom, two-bathroom private villa for rent in Crete. 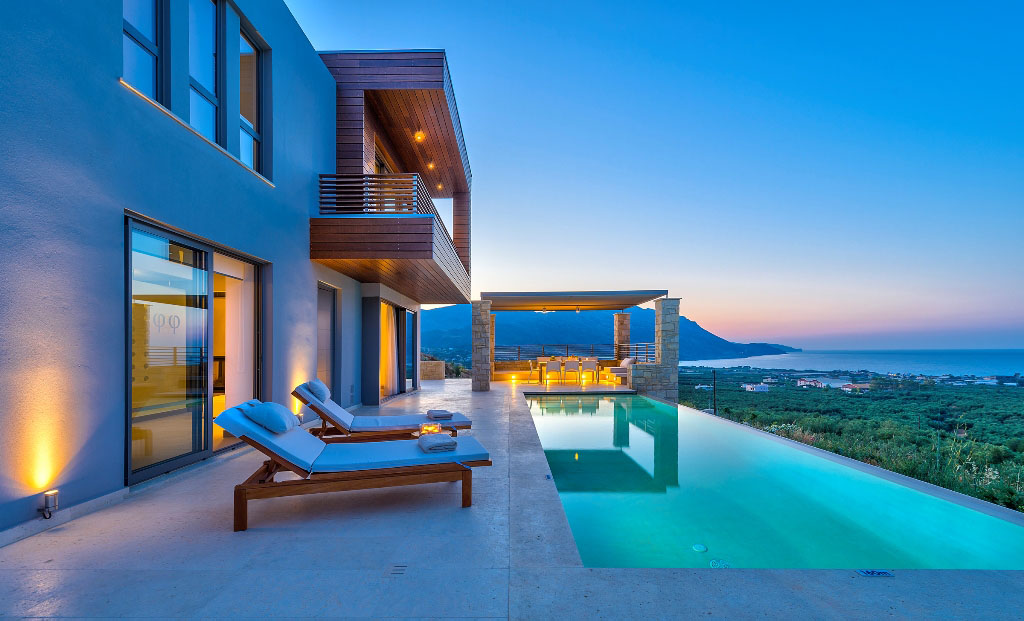 For more options, browse through our Greece listing here.