Things to Do in Brussels in Summer

Unlike your typical Caribbean summer escapade, summer in Brussels takes on a different mood. Summer does not automatically mean sunshine, so when the rays do shine, people take advantage of the good weather. Still, that doesn’t stop locals - and many tourists drawn to its charm - to enjoy it whenever they can. And you’ll be surprised by the abundance of things you can do around this lovely city.

Summer officially enters Brussels on June 21 and ends in September 23. Average temperatures don’t rise much, with a peak of only 23°C around August. But summer is summer, no matter where you are in the world. And that means you get to do some fun whether that means chilling by the bar, drinking beer or singing your heart out in the annually anticipated Summer Festival.

Don’t know where to go? Here’s out list of some of the best things to do around Brussels in summertime.

One of the newest addition to the yearly summer cultural festivity in Brussels, the Vaux-Hall Summer opens its doors to the public and holds cultural and family programs every Saturdays and Sundays in July and August. This year, it started early in June (2) and now holds shows on Fridays as well.

Located in Parc de Bruxelles, at the back of the Royal Theater Park in Rue de la Loi 1, the hall is a former Brussels theater. Its name came from an entertainment venue established in Kennington Gardens back in the 17th century on the estate of Falkes de Bréauté.

Curious fact: Originally, it was referred to as Falkes' Hall and as time went by, natural linguistic tendencies for evolution took hold, eventually drifting it into Fox Hall and now, Vaux Hall. Meanwhile, in Brabant-Wallon, the name evolved into Foscal.

1. Chill at the Chalet Robinson 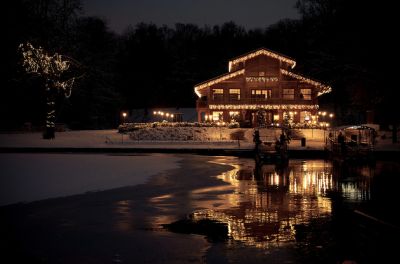 According to its website, the Chalet Robinson is just your ‘typical Belgian brasserie,’ only that it’s not your typical Belgian brasserie. If you wanna eat there, you have to take a boat, and cross a lake. And perhaps, that’s what makes it more appealing. Located at the heat of Bois de la Cambre, in an island, it offers the perfect setting to relax on a summer day. Take a deckchair out in the terrace, perhaps with a beer or a glass of wine or cocktail, and simply enjoy the warm and charming atmosphere. The overlooking lake especially makes it more splendid. The restaurant’s menu is reasonably-priced.

The only way you can get to Chalet Robinson is by boat. So if you’re with your significant other, it maybe a good time to have a romantic date. You can also bring along the whole family for a great bonding opportunity. 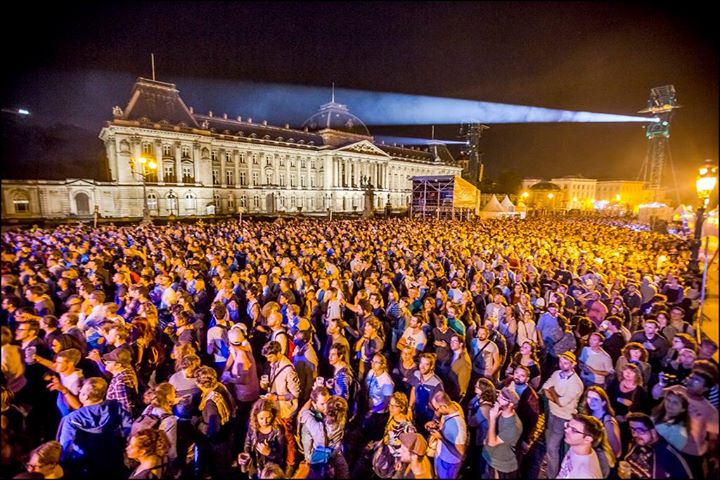 A five-day event happening from the 14th of August to the 18th, the Brussels Summer Festival is celebrating its 17th year with a spectacular show of concerts and cultural events at the Place des Palais and Mont des Arts. The festival features performances from various local and international artists.

This year, the shows will include:

3. Have fun at the Foire du Midi 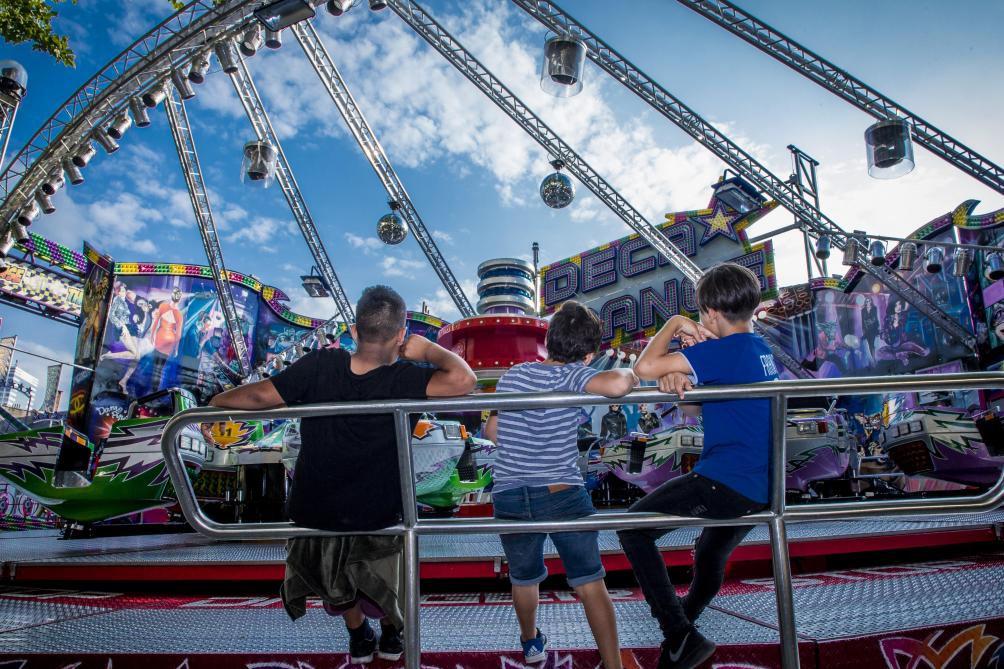 From August 14 to 19, the Boulevartd du Midi will be filled with spectacle with over a hundred attractions for both young and old. There is something for everyone in this highly anticipated funfair that is just the very idea of fun on a warm summer's day - or night! Numerous games, rides, and plenty of options to munch will be seen between the Porte de Hal and the Porte d'Anderlecht. If you're traveling with kids, this is the perfect place to go to; also fun to explore the different curiosities that make up the 130 points of interest in the fair. 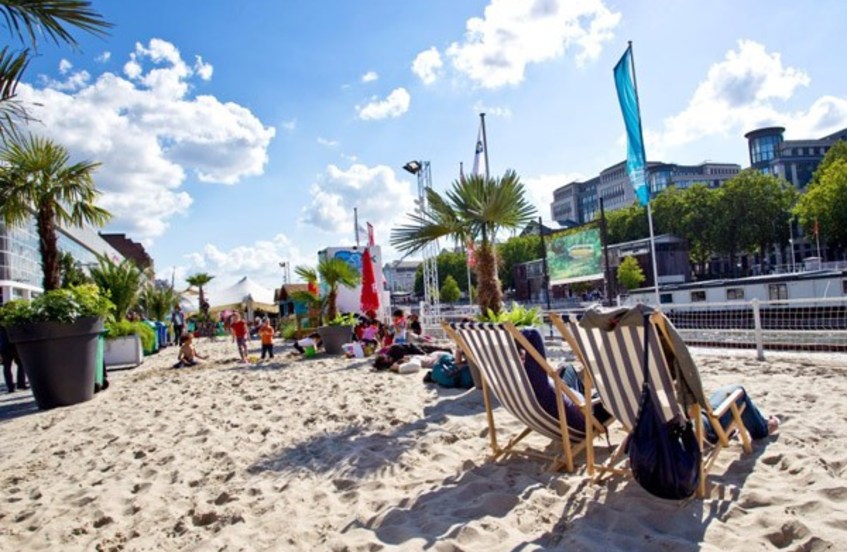 Starting July 6 and ending August 12, the cobbled quays of the canal mimics the beach scene, replete with imported sand, straw huts and palm trees. Reminiscent of Paris’s Rock de Seine, this event is flocked in Brussels as the waterfront is fills with summer urbanites who can’t escape to the real thing.

The urban beach takes place at Quai des Péniches near the Place Sainctelette with lots of events for every folk.

Activities include literature walks and readings, an open air cinema, beach volleyball and rugby, pretanque, yoga, etc, concerts including jazz, electro, pop, and more every Fridays, Saturdays, and Sundays, water activities such as paddling and initiation to sailing, and of course, clubbing. There will be 36 merchants present on site.

5. Laze Around the Park 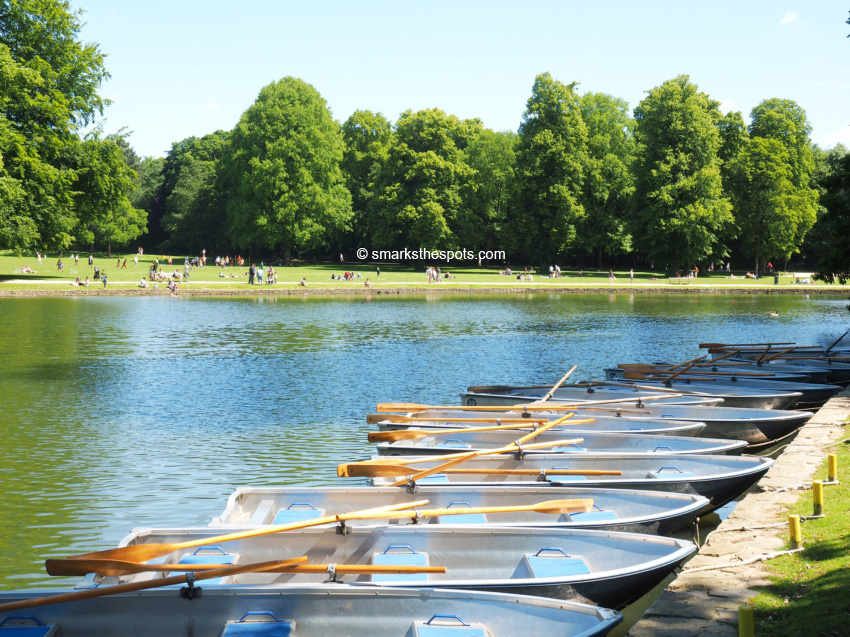 Who says you need to spend every waking moment of your holiday doing something spectacular and adventurous? After all, isn’t the point of holiday relaxing? Exactly.

So why not spend a good time lazing around, perhaps with a gelato in hand, people-watching in the park? Brussels is a green city with plenty of parks so you won’t have to worry about options.

For starters, the Bois de la Cambre where we’ve mentioned Chalet Robinson is located, is a lovely option. It’s located right at the edge of the Sonian forest with a lake.

The Cinquantenaire is another charming alternative. It is found at the heart of the European quarter along with majestic architecture, tall imposing trees with free chaise lounges and a fountain. And oh! There's a waffle van too!

Another lovely piece of green in the EU quarter is the Parc Leopold which is picturesque with its good share of flora. It houses the Museum of the Institute of Natural Sciences as well as other scientific institutes as well as a library which sometimes hosts cultural events. 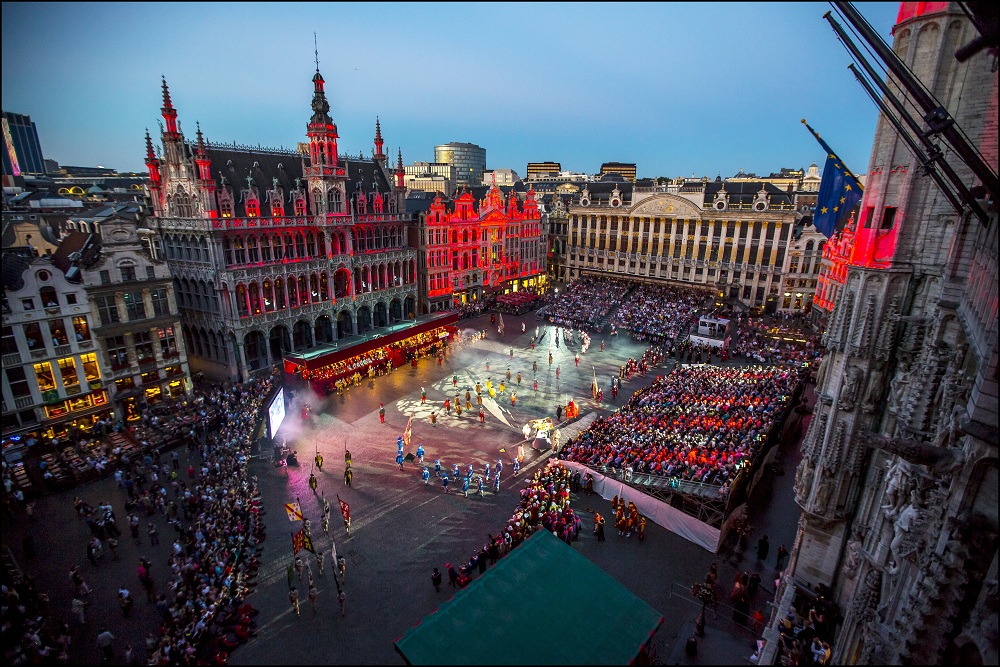 Named after the most powerful sovereign of the 16th century, the Carolus Festival showcases Europe's Renaissance heritage and history. It’s a series of events that highlight the important role that Brussels played in said history. These include the Ommegang Festivities where 1400 paraders will help you relive a historic moment on the streets of Brussels, talks and guided tours, exhibitions, musical and theatrical performances, a parade of giants, a family day, and even a treasure hunt!

7. Go to the Seaside 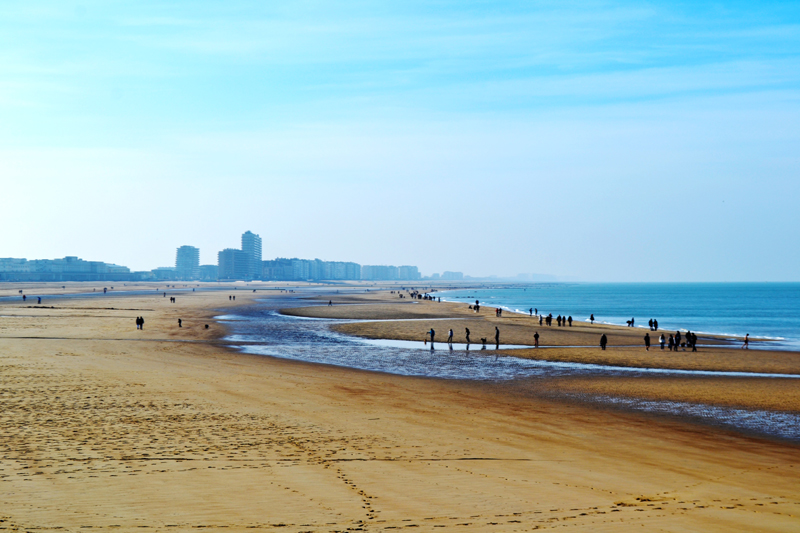 In summer, the train tickets are sold at half price from Friday morning to Sunday evening. Great for holiday goers who want to escape the city for a time, it's the perfect opportunity to take advantage of a cheap trip to Oostende (or Ostend). Oostende is a city on the Belgian coast known for its long beach and promenade. If you want to avoid the crowd in Oostende, you can instead buy a ticket to Blankenberge or Knokke-Heist instead. Blankenberge is a Belgian coastal town with a marina while the Knokke-Heist is a Belgian coastal municipality bordering Netherlands. Bring your own beach equipment or just rent and enjoy your favorite drink. Take a walk along the coast and just enjoy the holidays. 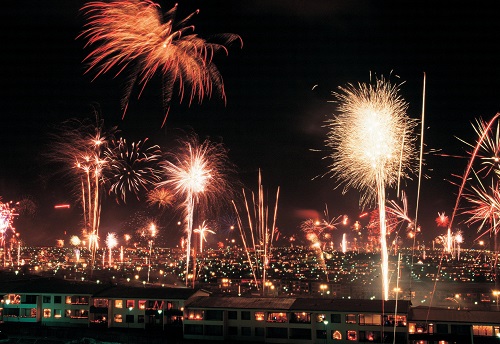 Celebrated every 21st of July every year, the Belgian National Day is one of Belgium’s 10 public holidays. This celebration commemmorates the date that Belgium swore in its first king, Leopold I. During this special celebration, the capital buzzes with numerous activities that includes festive booths set up on the streets, parades that showcase traditional local custom, and concluding with a spectacular fireworks display. It's a perfect opportunity to witness and experience the local spirits.

9. Witness the Iconic Flower Carpet at the Grand Palace 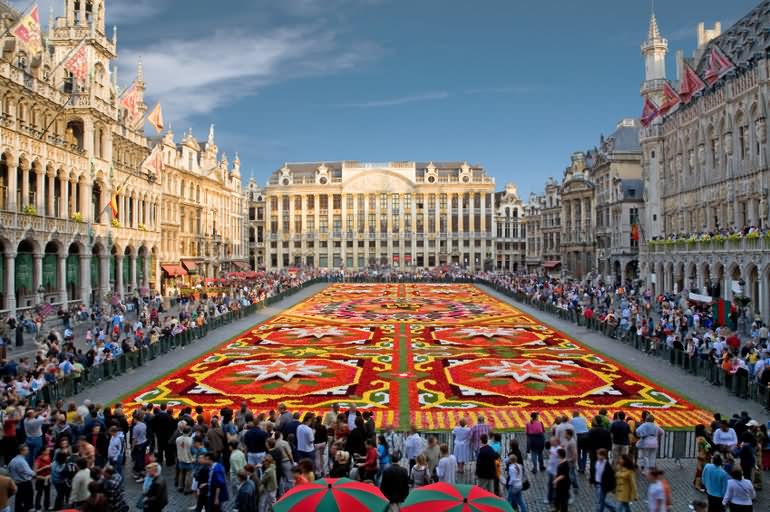 Happening only every two years, the front square of the Grand Place is transformed into a colorful flower carpet that features more than nearly a million begonias formed into a beautiful pattens depending on the theme of the year. This year, the event will take place from August 16 to 19. The carpet is 77 m x 24m in size and is composed of 120 volunteers. The theme is Mexico, a dedication to Guanajuato, a Mexican region with a particularly rich floral culture and tradition. You can also enjoy an additional floral exhibition at the Place de la Bourse. 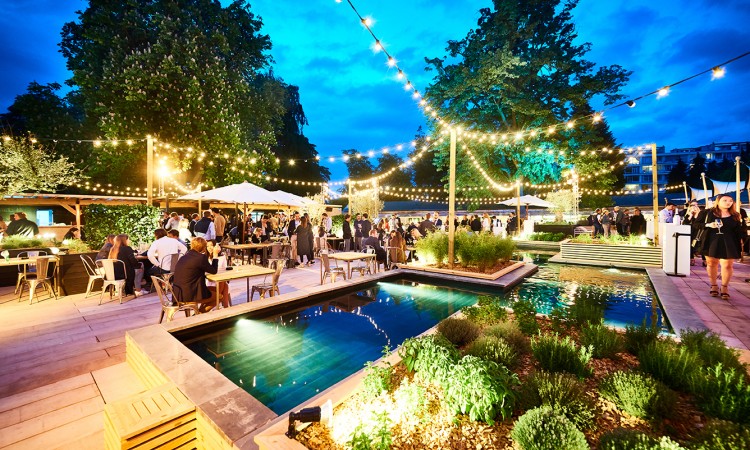 There may not be plenty of cocktail bars in Brussels but that doesn’t mean you can’t have fun. Head to one of the cool rooftop bars at Rooftop 58 or Play Rooftop Bar, or enjoy a fantastic evening at the terrace of the Crystal Lounge. Other great local places to just sit back and relax includes the La Terrasse de l’Hippodrome or the green oasis at Bar Eliza. The terrace at the Royal Library offers a great view of the city as well.