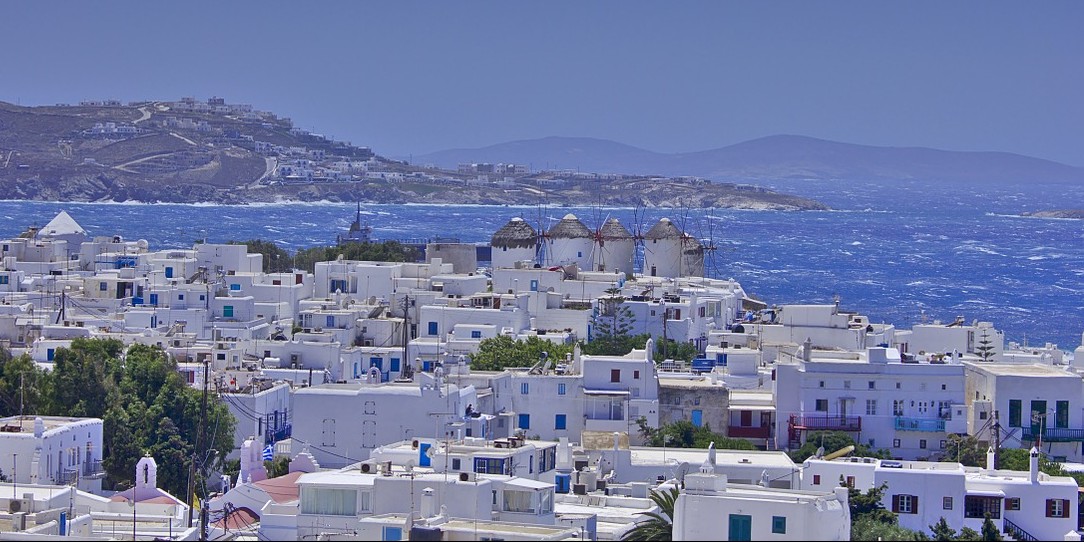 
The Greek Island of Mykonos is located in the center of the Cycles complex wherein it lies between Tinos, Syros, Paros, and Naxos. With an area of 85.5 square kilometers, Mykonos is famous for its cosmopolitan atmosphere, vibrant nightlife, architectural stunners, and sandy beaches. With numerous attractions in the islands, including the overhanging Little Venice, the trademark windmills of Mykonos, the beautiful churches across the island, UNESCO World Heritage Site Delos Island, and the pristine beaches near Chora, Mykonos is a travel destination for people of all ages. With so many attractions dotting the island, it is recommended that you spend at least two days in Mykonos to see its highlights and feel the vibe of the island. All Luxury Apartments is here to provide you with luxury vacation rentals in Mykonos to complete your holiday experience. Whether you’re planning a 2-day trip or a long-term vacation in Mykonos, we got the right travel accommodations for you. All Luxury Apartments provides luxury villas and apartment rentals that would guarantee a luxury vacation in this beautiful Greek Island.

One of the most romantic places in Mykonos is Little Venice wherein whitewashed houses that overhang the sea. Famous for its afternoon drinks and sunset dinners, Little Venice is one of the most popular tourist spots in Mykonos. This charming area is famous among artists and photographers as each corner of the place is picturesque. On top of the great view and ambiance of the area, Little Venice also has a number of activities for its visitors. Many of the houses by the seas have been converted into bars and cafes which are good venues for al fresco afternoon cocktails as the relaxing breeze of the ocean hits you. Some of the houses were also converted into boutiques, art galleries, and museums, one of which is the Archaeological Museum facing the harbor. One of the permanent museums in Little Venice, it features a collection of Geometric and Archaic era pottery, combat scenes from the Iliad, a Hellenistic funerary stelae, and other works of art as well.

Mykonos’ trademark set of windmills is the main feature of the Mykonos skyline. Currently, a total of 16 windmills are in the island which was built in the 16th century by the Venetians. Primarily used to mill wheat, the windmills were important sources of income up until the 20th century. Although they are visible in all parts of Mykonos, you may see them up close in the neighborhoods of Chora and Alevkantra wherein the windmills are concentrated. A windmill on the hill of Ano Myloi has been turned into the Agriculture Museum wherein a traditional threshing machine, a water wheel, village-style oven, a dovecote, and a wine press are exhibited. The museum also offers a great view of the picturesque town. An annual feast of the grape harvest is also celebrated here every second Sunday of September.

The UNESCO World Heritage-listed Delos Island is located southwest of Mykonos. The 500-kilometer long and 1,300-meter wide Delos Island is, according to mythology, the birthplace of Apollo and Artemis, and it is one of the most important mythological, historical, and archaeological Grecian sites. The most photographed area of the Delos Island is the Terrace of Lions wherein four whitewashed replica lions are placed. Northeast of the Terrace of the Lions is the Sacred Lake, which is the mythical birthplace of Apollo and Artemis. The Sacred Lake, however, has been drained since 1925 to avoid mosquito breeding. On the Southeast of the harbor is the Mount Kynthos in which the Sanctuaries of Zeus Kynthos and Athena Kynthia, and the Temple of Hera are located. Upon climbing the steep mountain, you would also catch a majestic view of Delos Island when the weather is clear.

Mykonos also has beautiful beaches in which you can lounge around and sunbathe. One of the most popular beaches on the island is the Super Paradise beach located 7 kilometers southeast of Chlora. With its crystal clear waters and golden sand, Super Paradise is one of the most beautiful beaches in Greece. It is, in addition, the most popular homosexual beach in the country, and it attracts both homosexuals and heterosexuals from different parts of the planet. Just beside Super Paradise beach is another beach called Paradise wherein most of the crowd a number of popular bars are located to cater to the beach’s young crowd. There are also a number of amenities in Paradise beach, including water sports facilities, a camping area, a diving center, and, perched on a hill, Cavo Paradiso wherein a pool, a restaurant, and beach bar are placed. Located 6 kilometers south of Chora is the Paraga beach wherein two beaches collide to form a large one. The northern part of the beach is organized and lined with taverns, while the southern one is calmer. These beaches are accessible by bus, regular boats, and taxi boats.

For an authentic Mykonos experience, try our luxury holiday rentals at All Luxury Apartments for a hassle-free vacation on the island. We have a range of holiday rentals in Mykonos that would fit your preferred location, budget, and duration of stay. With a number of accommodation choices, ranging from vacation villas to appartamenti in Mykonos, All Luxury Apartments can provide luxury vacation rentals—be it short term or long term—that would suit your needs.